It's the ones who can't write who often are the most dangerous.
Take the photo of this idiot who we can only guess is so angry that he spells Jews "JUICE". This in itself is pretty amusing and probably a good example of the level of intelligence of the group of protesters that he is a part of. 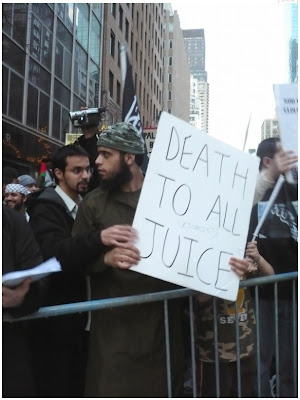 Idiot Protester: "DEATH TO ALL JUICE"
Unfortunately, this is probably the face of a person who is one step away from joining jihad against Israel, the US and anybody. After all, this is not a simple protester, but a protester who is calling for the death of a whole group of humans. Of course, now the useful idiots of the left (such as the ACLU) will defend this jerk and whatever actions he might do in the future noting that it was probably our mocking of his stupidity on the internet that pushed him to violent jihad.... Not for anything but I bet that this guy has bigger problems than worrying about what is going on in the Middle East.
Just saying.