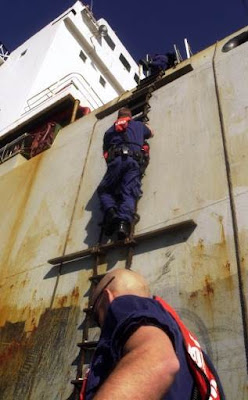 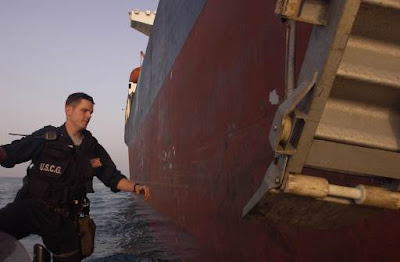 Eagle Speak has the latest Office of Naval Intelligence "Worldwide Threat to Shipping" which includes a summary of upcoming anti-whaling activities.

The International Maritime Bureau expresses optimism over the as the number of pirate attacks has decreased for the third straight year.

Marketplace.org has how the shipwreck of the MSC NAPOLI, which was carrying a thousand tons of nickel, has affected global nickel prices.

FIN24 (South Africa) reports that over 80% of the cargo on the MSC NAPOLI was bound for South Africa. 130 of the containers contained parts for a Volkswagen factory there which now will have to cut back production since the parts will not be arriving 'just-in-time'.

France's Préfecture maritime de l'Atlantique has a series of photos of the MSC NAPOLI.

Sailors, Mariners & Warriors League has the grounding of the NIJORD in Latvia where it turns out that 5 of 9 members of the crew were intoxicated.

Divester has the "USS ARIZONA is Wasting Away"

Freaque Waves has the loss of the fishing vessel OCEAN CHALLENGER to a freak wave.

Mary Katharine Ham at Townhall has a photo of the tombstone of US Navy sailor Edward J. Caffrey who died during WWII in '1944'.

The photo prompted Sheepdog to investigate, learning that Caffrey died while serving on the merchant ship M/S SUNOIL, which was sunk by a U-Boat in 1943. (Read the post to learn why there is a discrepancy in the dates.)

Here is a summary of the tragic end of the vessel he served on: 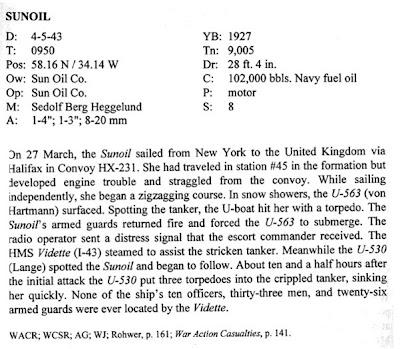 The BBC has the collection of cargo lost from the MSC NAPOLI by passers-by/scavengers along with the requirements for reporting your find. (The police were actually on the beach passing out forms)

Marex Newsletter has the rejection of plans to put a LNG Terminal at Long Beach Harbor. The West Coast still has no LNG Terminal.

Antarctica 2007 prepares for the arrival of the annual resupply ship at the US's McMurdo Station.

New Zealand's Environment Minister has decided that Japan's whaling vessels are not welcome in his country. He has also asked all sides to use restraint during this year's protests.

The Stupid Shall Be Punished has the discovery of the submarine USS PERCH, scuttled during WWII.

The Conservation Report notes Greenpeace's fears of overfishing due to liberalization of trade.

Lexacat's Guide to the Doom has the UK's illegal exports of garbage to China, disguised as recyclable waste.

UK 'needs a port plan' - LONDON - 24 January – The UK should develop a national port plan or risk losing direct calls to rival ports on the continent, a government select committee says in a report released today. If this were to happen, goods to the UK would be delivered by feeder services adding “more costs, delays and uncertainty to the delivery of all sea-going goods to the UK,” said Christopher Snelling, from the Freight Transport Association. During the consultation process, which ended in September, the Department for Transport had highlighted the benefit of a market-led approach to a ports policy. But today’s report stressed that the “market is not an island, entire of itself”. The ports industry should be considered as part of a multi-model freight transport infrastructure. “Without this infrastructure, provided by the government, funded by the taxpayer, ports simply could not function 4. A spokesman for the Department for Transport said the report would be digested along with both the ports consultation review and Eddington report. - Fairplay Homepage