This Weeks Photos:
So, you have a tanker full of fuel but no terminal to discharge it? That's when you call in the Offshore Petroleum Discharge System (OPDS).

Description: SS Chesapeake is one of the two Military Sealift Command Prepositioning ships carrying petroleum products for the Defense Logistics Agency, that operates out of Guam and Saipan.
Features: SS Chesapeake and SS Petersburg are outfitted with offshore petroleum discharge systems (OPDS). The ship can deliver 257,000-barrel of JP-5 fuel from up to four miles offshore through its integrated OPDS.
Background: SS Chesapeake was built in 1964 and was acquired by MARAD in 1991. SS Petersburg was build in 1963 and was acquired by MARAD in 1994. These ships are maintained by the U.S. Maritime Administration and operated by IUM. - US NAVY Fact File 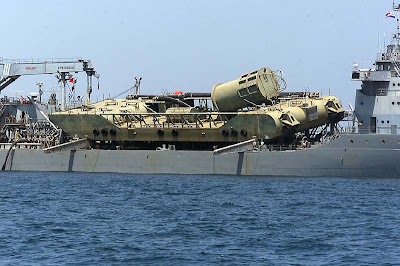 (The barge on deck is actually a Single Point Mooring) 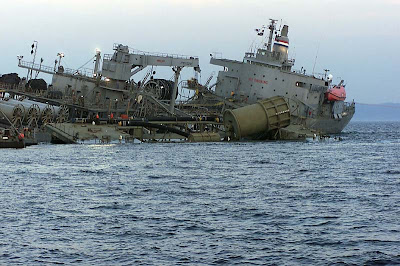 (Dischaging the Anchor)
This photos as well as an in-dept write-up can be found at "Exercising Ship-to-Shore Logistics in Korea." (From the Winter 2001 edition of Asia-Pacific Defense Forum)

Eagle Speak has US Navy Visit, Board, Search and Seizures (VBSS) training in the Chesapeake Bay, done in cooperation with the US Naval Academy.

Sailors, Mariners & Warriors League has "Canada's Navy Out of Money." All sorts of projects are currently at risk including maritime fishery patrols. Not at risk as the moment is Canada's sizable operations in Afghanistan which "is eating money like you wouldn't believe". (Now contrast Canada with France, which apparently cannot afford to help in Afghanistan or operate a Coast Guard of their own. Just what do they do with all their tax revenues?)

The BBC has reader-submitted pictures of the MSC NAPOLI as it was grounded to prevent the vessel from breaking apart and sinking. The Washington Post has a summary of the vessel casualty. Shipspotting.com has a photo of the vessel from better days. Eagle Speak has coverage of the amazing helicopter rescue of the ship's crew after they abandoned ship. As of this morning, Cargo Law also has 'real-time' coverage.

Nothing To Do With Arbroath has the story of a possum that survived a six week trip from Australia to the UK as a stowaway.

Shadow Warrior has the discovery of illegal air rifles and korans hidden in a shipment of furniture from Dubai to India.

Captain Peter at Shipspotting.com has an amazing photo of the SEGESTA JET after it was in a collision with the SUSAN BORCHARD which resulted in the death of four seafarers on the bridge. More pictures, both before and after, and the story about the accident at Sailors, Mariners & Warriors League.

MarEx Newsletter has the approval for the US Coast Guard to proceed with an Automatic (Vessel) Identification System.

Doc or Die has comments about the improved flow of information in shipping allowing you to find out that your 'just-in-time' shipment will be a little late, allowing you to adjust your operations.

(Soon to be canceled by owner AOL) Divester has Australia's Environment Minister's decision to ban Japanese whaling vessels from Australian Ports. (Divester apparently does not bring in enough advertising revenue for AOL to continue it. How many bloggers would kill to have Divester's level of ad revenue? Clearly AOL has no concept of what a blog is.)

The Pilot Boat has photos of the C E C HUNTER missing its rudder.

Alaska Report has an editorial by Terry Haines on Alaska's Fishery Management.

Daily Pundit has a commentary on the falling price of oil and signs that it will drop further, such as full tankers with no place to discharge.

Secular Blasphemy has an example of why you should not take voice instructions from your GPS too literally. Once again, just spending one second of paying attention would have prevented this accident. Why not just hook the damn thing up as an autopilot if your not going to think. (That is now two incidents in Europe. What about the American drivers?)

Car Automotive has a summary about shipping your car internationally.

Vessel sinking leads to Refuse Act prosecution - The US Attorney for the District of Massachusetts issued a press release stating that a local fisherman was convicted of violating the Refuse Act by intentionally sinking his fishing vessel off the coast of Gloucester. He was sentenced to one year of probation, a fine of $2,000, restitution of $1,928 to the Coast Guard for responding to the sinking, and a public apology. (1/16/07).

Report urges holistic view of fatigue - CARDIFF 16 January – Fatigue-inducing working conditions may be leading many young seafarers to leave the sea at an early stage; similarly, the relatively short careers of many seafarers may reflect a reduced ability to cope with fatigue later in their careers. These suggestions form part of a call to take a holistic view of fatigue, proposed in a new report from Cardiff University’s Centre for Occupational and Health Psychology. Despite many examples of work-related death, injury and ill-health among seafarers pointing to fatigue as a cause, the issue is not being properly tackled, the report states. “Manning levels need to be addressed in a realistic way that prevents economic advantage accruing to those who operate with bare minimums.” Levels should take into consideration the need for maintenance, recovery time, redundancy and the additional burden of paperwork. “It is essential that existing guidelines are enforced with mandatory provisions and that effective measures are taken to overcome the problem of false record-keeping … As long as seafarers feel compelled to falsify records of their hours of work, the problem will be hard to address,” the report concludes. The ITF-commissioned report, Adequate Manning and Seafarers’ Fatigue – the International Perspective, is to be presented to the IMO’s Standards of Training and Watchkeeping sub-committee annual meeting on 23 January. - Fairplay Homepage