This Week's Photo:
Here is a photo of what is left of the MS SERVER in Norway. (Link to story below.) 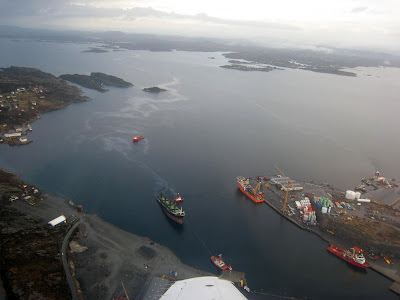 This Weeks Items:
The US Maritime Administration has a biography of Captain Hugh Mulzac, who was the first African-American Captain of an American ship with an integrated crew. He was given his ship in 1943, twenty years after obtaining his Masters License.

Eagle Speak has two cases of defective anchors. You can find the US Coast Guard Press Release here. (How much does it cost to air freight a ship anchor?)

Sailors, Mariners & Warriors League has coverage of the Cyprus-Flagged, Greek-Owned, MS SERVER which has split in two after running aground, in Norway. (Photo above.)

Sailors, Mariners & Warriors League also has the best coverage of the VINDO, which was adrift in the North Sea, passing between offshore oil platforms. This is the same vessel that was listed in Maritime Monday 26 when it was involved in a collision in the English Channel. (Talk about a string of bad luck.)

California conservative has Iran's Threat to block the Strait of Hormuz "if the West continues to threaten Iran’s economy over its nuclear program."

Navy Newsstand has a Boarding Officer Training Conference in the Northern Persian Gulf.

Marex Newsletter has news of a harbor pilot's laptop being tampered with by a foreign-flag vessel's captain. Also noted are two other maritime laptop incidents all involving the same unnamed foreign country.

Japan Probe has the Sea Shepherd Foundation's latest preparations to attack Japanese Whalers in the Antarctic. The story mentions that the vessels have lost their Belize Registration and are currently sailing under no flag other than their own. Sea Shepherd's website here.

The Guardian has word of what will be one of the largest class action lawsuits to be heard in the UK. It involves the PROBO KOALA Ivory Coast toxic dumping incident.

Bellona has Russia's denial of reports of a missile fuel leak from a Pacific-based submarine.

The BBC has coverage of the Nation-State of SEALAND off the UK being offered for sale. Engadget has word that a Swedish file-sharing website is dreaming of buying the island-nation in order to protect itself from copyright violation lawsuits.

Ocra Worldwide has the European Commission's lodging of two cases with the Court of Justice against Portugal for failure to respect EU legislation in the field of maritime safety.

Gateway Pundit has coverage of the Democrats drive to ban offshore oil drilling while the Chinese prepare to drill a mere 70 miles from Key West. (Dear Congress. Offshore oil means jobs. Both ashore and at sea. Many more than if drilling on dry ground.)

The Stupid Shall Be Punished has coverage of the USS NEWPORT NEWS submarine collision with the Japanese Flag tanker M/V MOGAMIGAWA.

The Monitor has another mishap for Canada's BC Ferries.

Local10.com has CAIR's press conference including their consideration of filing a lawsuit. Funny how they have no problem communicating now. (Until Cair got involved, these three were anonymous to the rest of us. That apparently was not good enough for them so they had to go and have a press conference about it. So here are their names; the driver Al-Hadad, his brother, Hussain Al Hadad, and friend, Hassan El Sayed.) 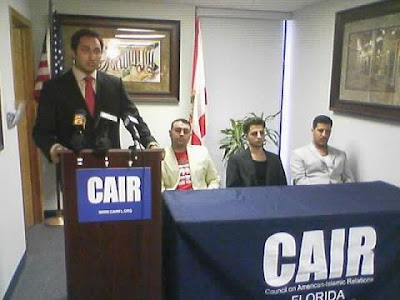 Debbie Schlussel (who has also termed them the 'Miami 3') has a great overview of their criminal backgrounds including felony convictions, asks why would they drive a container all the way to Miami from Michigan, and yes, notes that the driver does not have a commercial license. Surely, their lives appear to be full of 'misunderstandings'.

Union to sue convicted officials - MIAMI – The new leadership of the American Maritime Officers union has agreed to sue the group’s former president and secretary-treasurer for misappropriated funds. The announcement was made late yesterday by the group’s new national president Thomas Bethel, who was appointed following the resignation of Michael McKay, who was convicted on Friday of racketeering. "The initial actions taken today by the national executive committee and national executive board will help AMO overcome the difficulties linked to the federal government’s prolonged investigation of AMO and the AMO Plans and the indictment, trial and conviction of Michael McKay and Robert McKay ... We take our fiduciary responsibilities seriously, and will do whatever is necessary under US law and regulation and the AMO National Constitution to protect AMO’s interests," Bethel said in a statement posted on the web site. Litigation will also be filed against his brother Robert, who lost in his bid for re-election as national secretary-treasurer last month and who was also convicted of racketeering. The brothers have been denied access to union offices. - Fairplay Homepage

UK – master fined for ship grounding - The UK Maritime and Coastguard Agency (MCA) issued a press notice stating that the master of a small cargo vessel was fined £2,500 for not having an adequate lookout on the ship when it grounded at night in the Pentland Firth. The ship had a crew of seven. The chief mate fell asleep while on watch. The lone seaman on board was utilized for day work, rather than as a watchstander. Note: one wonders about the Safe Manning Certificate. (1/11/07). - Dennis Bryant (Electronic Letter Homepage)

Previous Editions:
Here or click on the label below 'MaritimeMonday'.
-
Posted by Fred Fry at Monday, January 15, 2007

It could be a waste to see the port loose more ships. Ships are now a great way to uplift a countries economy as it brings both on shore and on board jobs.