Photos of the Week:
Here is a photo of the Viking Line vessel ROSELLA while testing it's liferaft systems. The vessel is currently the subject of a labor dispute. See EU Referendum's entry below. The second picture is merely a reminder that you rarely have to abandon ship in good weather. 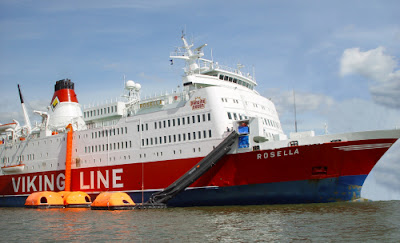 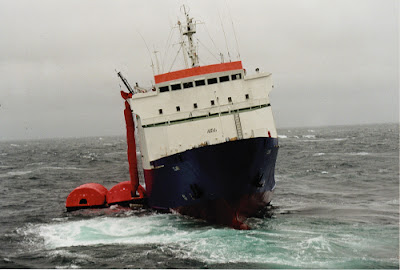 More photos can be found at the Viking Life-Saving Equipment Website.

Eagle Speak has a roundup of Sunday's 'misunderstanding' (lying) at the Port of Miami when a truck that should have contained just a driver ended up containing two others, all of Middle-Eastern decent. No explanation on why the other two were not clearly visible at the first gate. One just has to ask, if the driver cannot understand a simple question "Is there anyone in there with you?" should he really be in charge of a tractor-trailer truck?

The Toronto Star has the story of 14 year old Michael Perham being the youngest to sail across the Atlantic Solo. So let's bring on the 13 year old challengers. In other news, Sail World brings us the failed solo voyage of Californian Ken Barnes, who required rescue in a remote region off the coast of Chile. He waited three days for rescue and was lucky that he was not more seriously injured in the incident that disabled his sailboat. Also lucky were the rescuers who were not injured while bringing him aboard. (Then again, the fishing vessel had to stop their fishing, so they might have been injured financially.) Sure, seafarers are duty bound to rescue fellow sailors in trouble, but historically, they have been called to rescue other professionals and not those who are out on over-extended ego trips. Ken's website is here and pictures of his rescue are posed here. Simple message, sailing solo over long distances is just a BAD IDEA. Instead, how about trying to be part of a team and sail the Volvo Ocean Race. As the site says "Action Starts 2008."

The Kaselehie Press (Micronesia) has coverage of the arrest of the Chinese fishing support vessel HAI SHUN for deliberate failure to rescue sailors in distress. (The sailors spent an additional 29 days at sea.) Yes, it is possible to arrest a vessel but you better keep a good eye on it as it is not possible to handcuff it to the dock.

Digital Rich Daily has a Christmas conversation with his Great Uncle who sailed in the Merchant Marine during WWII.

Sun-Sentinel.com has news of the conviction of American Maritime Union's (AMO) Michael and Bobby McKay:

After hearing from nearly 30 witnesses and reviewing thousands of documents, Broward jurors took just one day to find Michael and Robert McKay guilty of racketeering conspiracy as president and secretary-treasurer of American Maritime Officers, a national labor union based in Dania Beach.
The brothers, whose father served as union president for 36 years, showed little emotion as the verdict was pronounced late Friday afternoon in Fort Lauderdale federal court.
In addition to the racketeering charge, which carries a possible 20-year sentence, Michael McKay, 59, was convicted of three counts of mail fraud and two record-keeping offenses. He was found not guilty of embezzling from an employee benefit plan. Robert McKay, 56, was convicted of two counts of mail fraud, embezzlement, and two record-keeping offenses. - Sun-Sentinel

EU Referendum has coverage of a European Court of Justice case concerning the right of an EU-based Shipping Company to reflag a vessel (in this case from Finnish-Flag to Estonian Flag) and replace the crew to reflect the new nationality of the vessel over the right of the crew to the jobs. The shipping company is in court to prevent the Finnish Unions from carrying out an action against the company's vessels in retaliation. Here is the International Federation of Transport Workers (ITF) Press release covering their 'victory' at the appeals court level concerning their right to strike against the company. The page links to their 'Flags of Convenience Campaign' which makes me wonder if they consider Estonia to be a Flag of Convenience. I would think that they would fit the definition of a FOC if they reflagged to Estonia and kept the Finnish Seafarers. Crewing an Estonian-Flag vessel with Estonians is in-line with the ITF national-flag manta. Of course this would not have been an issue if an Estonian-Flag vessel was to reflag to Finland. So much for free movement of labor within the EU.

Molten Eagle has reasons to care about the declining US sub fleet.

The Pilot Boat has an excellent post on vessel 'Minimum Safe Manning' including this gem:

On most ships calling this port, the master is the only person on the bridge with the pilot whether with or without daylight. And I am not just talking about the small coasters, I’m also referring to some larger vessels. In these cases, the master will be steering the vessel, adjusting speed, checking the position, maintaining the lookout (visual and radar), will be in charge of communications (internal and external), exchanging information with the pilot, reacting to the inevitable bridge alarms, filling the bell book… is this safe manning? - the Pilot Boat, Malheiro do Vale

The International Herald Tribune has news of US farmers filling ever larger quantities of empty containers with grain before they are shipped back to China. (Other popular low-value filler cargos are 'waste paper' and hay.)

Pilotonline.com has US shipyard displeasure over the TWIC Program which some shipyards will have to comply with.

Marine Link has the story (including photo) of problems with the liftboat JUAN in the Gulf of Mexico.

Google Video has the entire Danish Maritime Movie SS MARTHA (MARTHA). (This movie is theoretically available on DVD with English subtitles. If someone over there can assist me to obtain this, I would be most grateful.) It's in Danish but still amusing. Just watch minutes 4-6 to get an idea. No translation required. 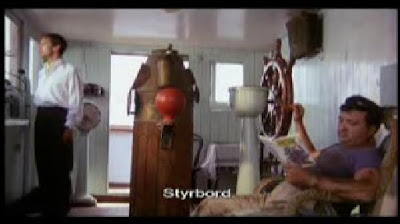 Marex Newsletter has the story of Dr. Harry Wong and his goal to sink up to 20 ships off the coast of California for use as artificial reefs.

The Australian has news that Russia's nationalization of their Sakhalin 2 oil and gas project will probably cost them a $300 million loan from the European Bank for Reconstruction and Development.

FishUpdate.com has Oceana's criticism of the EU's 2007 fish catch limits, which were in complete disregard of scientific recommendations.

TSA – TWIC final rule – advance copy - The Transportation Security Administration (TSA) released an advance copy of the Final Rule for phase one of the Transportation Worker Identification Credential (TWIC) program. The official copy will be published in the Federal Register shortly. The rule, which lays out the process for issuance and initial use of TWIC cards, comes into effect 60 days after publication in the Federal Register. Comments on the card replacement fee should be submitted within 30 days after the rule is published in the Federal Register. The requirement for facilities and OCS facilities to limit unescorted access to secure areas to persons holding valid TWIC cards will come into effect based upon notifications to be published in the Federal Register and will require compliance on a USCG Captain of the Port (COTP) Zone basis. Persons seeking unescorted access to secure areas aboard affected vessels, as well as all USCG-credentialed merchant mariners, must possess a valid TWIC card not later than 20 months after publication of the final rule in the Federal Register. The document is too long (469 pages) to address all issues in this newsletter, but some highlights follow. The enrollment process will commence no sooner than March 2007 in a small number of ports, with gradual expansion nationwide. Subsequent notices will provide detailed information on enrollment sites, schedules, etc. While the TWIC will be a smart card, with encrypted biometric data, the requirement for installation and use of a card reader will be delayed for a future rulemaking (phase two). In the meantime, the TWIC card will function as a photographic identification. Since the TWIC card will not be issued until after the applicant has passed a background check, security will be enhanced, but not as much as it will be when card readers are installed and functioning. Provision has been made for new-hires to have limited access to vessels and marine facilities once their TWIC applications have been submitted. Owners and operators of certain marine facilities are provided an opportunity to redesignate portions of their facilities so that TWIC cards are not required of persons working in areas that don’t need to be secure. The fee for application for and issuance of the TWIC card will be established in a subsequent notice. Crewmembers on foreign-flag ships will not need TWIC cards, but can expect further restrictions concerning going ashore without an escort. There is much to criticize (or nit pick) in the Final Rule, but, to first appearances, it is a significant improvement over the earlier proposal. (1/3/07). - Dennis Bryant (Electronic Letter Homepage)

I am not sure I want to go through the trouble of obtaining one.

Stronger Yuan hits Chinese exporters - SHANGHAI - The continuing rise in the strength of the Chinese Yuan is posing an increasing challenge for exporters. The currency has risen by 7% over the past two years and, with the economy growing at around 9% a year, further strengthening can be expected. For those sectors, including maritime interests, where international competition is strong and in some cases profit margins are already slim, a rising Yuan could cause significant issues. One company that has expressed a view on this is the Shanghai-based Zhenhua Port Machinery Co. A ZPMC spokesman quoted in a report from the Hong Kong Market Watch website said the stronger Yuan is eroding profits on its container cranes when sold in dollars. Prices have been increased but ZPMC needs to become more efficient to counter the effects of currency appreciation. Shipbuilding will also have to tackle the currency issue. - Fairplay Homepage

Please submit articles for inclusion in next week' edition using the following submit form at Blog Carnival. You are also welcome to email photos for inclusion in future editions as well as suggest area of coverage.
** Sponsorship **
Send me an email (address in the sidebar) if you would like to sponsor an edition of Maritime Monday. I accept money and gear.
Previous Editions:
Here or click on the label below 'MaritimeMonday'.
-
Posted by Fred Fry at Monday, January 08, 2007