Welcome to this Fred Fry International 3-Year Anniversary Edition of Maritime Monday. (My first blog post was on 19 December 2004 and can be found here "Seeing things in Black and white instead of in shades of gray.")

This Weeks Photo:
This weeks photo comes from the Picasa web album of 'Ping' who snapped photos during his tour of Evergreen Marine's M/V EVER SAFETY. 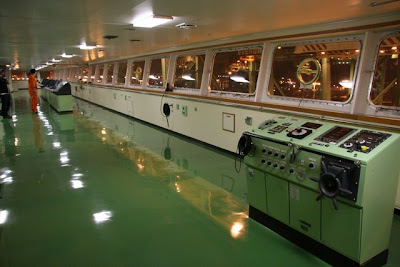 You can see all his tour photos here including a couple looking down at the cargo operations.

Eagle Speak has "Latest ONI Worldwide Threats to Shipping Report (to 12 Dec 07)" which includes coverage of the latest Greenpeace and Sea Shepard anti whaling and other protest/terror activities.

Hawaii Reporter covers the return of Hawaii Superferry service by taking a ride on the vessel.

Chaotic Synaptic Activity in his Monday Maritime Matters has the story of WWII Medal of Honor recipient SP5 Eric G. Gibson, who is also honored by the US Navy who named the MV SP5 ERIC G. GIBSON (T-AK 5091) after him.

NPR has a radio report on the first Japanese attack against the US during WWII. It happened in December, 1939 when the Japanese sank the USS PANAY while it was stationed in China. Wikipedia has a summary here. Also hit during that day were the Royal Navy's HMS LADYBIRD and HMS BEE. More at the Internet Archive.

I look at the City of San Francisco's COSCO BUSAN lawsuit. They are suing 100 people who they only name 'DOE'. So there might be 100 people who aren't sure if they are being sued or not, but if you were part of the crew, one of the tug captains, vessel agent, line handler or other person who breathed the name of this ship before the accident, you might want to claim one of those 'coveted' DOE positions and counter sue. That might force the city to either name you or exclude you from being named later. But for the moment, lots of people have targets on their backs.

EU Referendum covers the European Court of Justice's ruling on the right of a company to reflag within the EU against the right of worker's unions to act against the company in "Social dumping OK!". The company involved was Viking Line and the ship was the ferry M/V ROSELLA.

Canada Free Press has clarification on the disappearing Arctic Ice Cap Story. Turns out the sky is falling/ice is melting story was completely distorted to benefit the Global Warming econuts. (Found at EU Referendum)

You can find the English translation of the DANICA WHITE piracy report here.

Maritime Accident Casebook also has a follow-up to his "The Case Of The Electric Assassin" with shocking news that almost the exact same accident, costing two more lives, happened on a sister ship. Go read it and make sure it does not happen to you. Land-lubbers should read it as well, because you never know when/if you'll encounter an enclosed space. Sailors should know, yet these deaths keep happening.

The U.S. Chamber of Commerce has "Chamber Opposes Retroactive Tax Hike on U.S. Flagged Ocean Carriers" Fairplay comments on how Congress tried to back-door this tax hike: "The surreptitious move by Democrat Rep Charles Rangel was uncovered earlier this week in a usually obscure piece of legislation meant to repair errors in previously passed bills." Nothing is a nice as defining a tax-break as an error, right Charles? Surely he did not act alone. Who else knew?

Miami Herald has 'passenger outrage' on the NORWEGIAN DREAM after the ship struck an adrift barge. Guess they really would have been pissed had the ship sunk! Part of the problem is that some of the passengers are demanding a full refund and the cruise line has offered just over half. Maybe someone should tell them that they are entitled to almost nothing. Sea * Fever comments on the story and shares a similar personal experience dealing with passengers that just have to go, damn the circumstances. Go read it.

The recent spate of criminal actions brought against mariners everywhere is old news. It is a reminder, however, that going to sea in 2007 is a far more complicated proposition today than it was just thirty years ago. [Note by Fred: Same goes for just 15 years ago!] In this regulatory climate, it is not surprising that so many mariners are choosing not to go to sea and that shipping companies are moaning about not only the lack of mariners, but also the lack of fully qualified professionals. And now, in the choppy wake of the Cosco Busan allision, it certainly appears that the legal focus on marine pilots will be ramped up considerably, as well. (Go read the rest here)

Seattle PI has more anchor troubles for the ALASKAN NAVIGATOR. This is the same ship that lost its anchor last year.

Bitter End has comments on interaction between ships and boats with suggestions on how ships can make encounters safer for boaters. Of course it is best for boaters to stand clear. It is much easier to do that if you know where the clear areas are!

Tims Times has one of the biggest dangers to seafarers in "Don’t go ashore there".

CDR Salamander is the latest to comment on the Law of the Sea Treaty.

So, your Navy's only aircraft carrier is undergoing an overhaul, what do you do for at-sea flight training? Well if you are France, you make arrangements to get some planes deployed on the USS ROOSEVELT. Steeljaw Scribe has the details and photo here.

Tugster has great photos of the C-Class containership OSLO EXPRESS.

Sea * Fever has "Popular Mechanics Thinks Being a Merchant Marine Captain is Cool!"

The Monitor has "Korean built cruise ships coming soon". You can almost hear the shipyards in Europe dying, as specialized ships were their defense against the cheaper Asian shipyards.

Neptunus Lex covers an emergency appendectomy on a US Aircraft Carrier on a passenger who had started his day on a cruiseship.

Blog Japan attends the Mitsui shipyard launch of the AFRICAN KOOKABURRA and takes a couple pictures.

Years of planning has failed to address a very important issue concerning opening a new cargo terminal. Helsingin Sanomat covers the story in "Vuosaari harbour transport needs could cause major traffic jams on Ring Road". This is not to say that they overlooked the issue of traffic coming into and out of the terminal. They just did not look far out enough. Why didn't the effected communities try to address this problem earlier?

The Pilot Boat has "Rope Splicing"

Castle Argghhh has a photo of recently released GOLDEN NORI, which was being held by pirates off Somalia, as it is refueled by the USS WHIDBEY ISLAND.

Maritime Compass has coverage of where to find some classic knitting patterns for sailors and soldiers. If this is your sort of thing, how about knitting a watch cap?

Shipping Times (UK) has "RFA LARGS BAY foils drug smugglers" They are operating in the Caribbean.

Bill introduced to prevent maritime emergencies - Senator Boxer (D-CA) introduced the Maritime Emergency Prevention Act of 2007 (S. 2430) to prevent maritime emergencies, and for other purposes. This bill, if enacted, would authorize the USCG Vessel Traffic Service (VTS) to command the person directing movement of a vessel to modify the speed or direction of the vessel in an emergency. It would also require federally licensed pilots to use laptop navigation computers, where practicable and necessary. Senator Boxer also issued a news release discussing the proposed legislation. Note: Turning the ship navigation concept on its head will require more than an Act of Congress and should not be undertaken in haste. Also, the laptop computer requirement should apply to state-licensed pilots, if at all. (12/6/07). - Dennis Bryant Holland & Knight homepage (Used with Permission)

Sweden angry at Baltic death traps - STOCKHOLM 12 December – Sweden’s Maritime Safety Inspectorate has called on all foreign-flagged Baltic ro-ro ferries to shut their watertight compartments while at sea to prevent another Estonia disaster, reports the Swedish weekly Ny Teknik. The doors of the compartments in several Finnish, Lithuanian and Estonian vessels do not have waterproof power sources. The inspectorate says it is vital that electrical power sources for doors on older ferries built before 1992 are waterproof to the highest SOLAS classification. But it is facing stiff opposition from operators and its Finnish equivalent. “The requirement for waterproofing these components is a footnote in SOLAS and merely a recommendation,” retorted Bo Fagerholm, inspector and stability expert at the Finnish Maritime Safety Inspectorate. He maintains it is sufficient for Finnish bridge crews to immediately press the “all-doors-button” once an accident has occurred to prevent water from entering a ship in the first place. But when the Stena Nautica collided with cargo ship Joanna in February 2002, panic on the bridge delayed this action by three minutes. Water leaking in from the resulting hull breach then short-circuited the watertight compartment doors. Estonia’s Fantaasia, Lithuania’s Regina Baltica and Vana Tallin, as well as Viking Line’s Mariella have been hauled up by the inspectorate on this safety breach in the past two months. It remains unclear what role the doors to Estonia’s watertight compartment played when it sank in 1994. - Fairplay Homepage (Used with Permission)

Viking wins landmark EU labour case - LUXEMBOURG 12 December – The European Court of Justice has ruled in favour of the Finnish ferry company Viking Line in a long-running dispute with trade unions over reflagging one of ships to Estonia in 2003. It has been regarded as a landmark case as it concerns the right of trade union members to strike if a ship is being transferred from one EU flag to another. The dispute arose as the Finnish Seamen’s Union and ITF threatened Viking Line with strikes and blockades if it flagged the 1980-built Rosella from Finland to Estonia and replaced its Finnish crew with Estonians, which it said are up to 60% cheaper than Finns. Finnish crew were offered jobs on the company’s other ships. The Court agreed with Viking that the strike and blockade could be seen as efforts to prevent a company from doing business in the country of its choice in the EU. It also said that strikes and blockades by unions to prevent the reflagging of a vessel from one EU member state to another is only justified if all other avenues to find a desired solution, in this case a reduction in crewing costs, have already been exhausted. Estonian seafarers have confirmed to Viking Line that Finnish seamen earn twice as much as they do, which means that it is not possible to compete, according to Viking. - Fairplay Homepage (Used with Permission)

Dear Fred Fry International,
Wish you all the best on your 3rd Anniversary of Blogging.