This Weeks Photos:
This weeks photos comes from the website of Prosafe:

Prosafe has more than three decades of operational experience from the world’s largest oil and gas provinces. With an excellent uptime record, a solid financial performance and the ability to offer innovative in house technology and cost-efficient solutions, the company has positioned itself as a provider of high quality services. - Prosafe 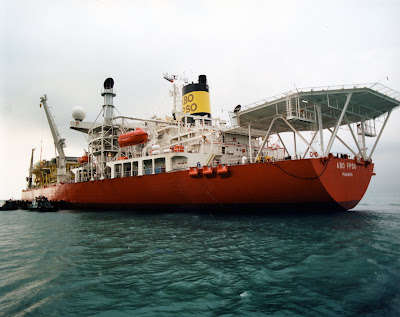 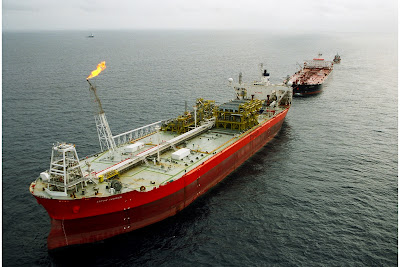 Prosafe is the world’s leading owner and operator of accommodation/service rigs. The company owns eleven semi-submersibles and one jack-up. Operations comprise bareboat charters in the Gulf of Mexico and time charters in the North Sea, west Africa, the US Gulf, Australia and off Sakhalin Island, Russia.

Accommodation/service rigs have traditionally been used wherever there is a need for additional accommodation, engineering, construction or storage capacity offshore. Typically, these rigs will be employed for installing and commissioning new facilities, upgrading or maintaining existing installations, hooking-up satellite fields to existing infrastructure, and removing installations.

The rigs are positioned alongside the host installation and are connected by means of a telescopic gangway, or personnel can be transported to and from the unit by boat or helicopter. These rigs boast substantial accommodation capacity, with berths for 245-812 people, have high quality welfare and catering facilities, medical services, storage, workshops and offices, deck cranes, and the necessary equipment and systems for ensuring the safety of the personnel living on board. - Prosafe 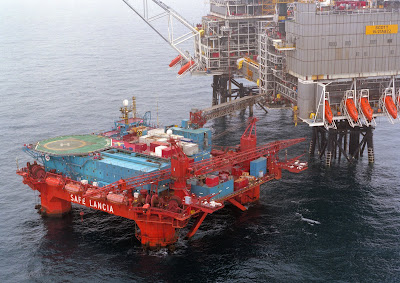 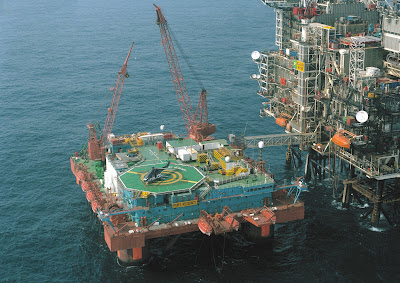 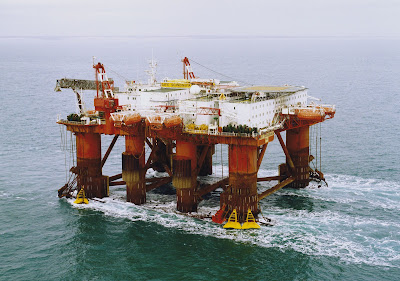 Eagle Speak has the story of the US Navy putting the squeeze on the terrorists holding ships hostage off Somalia.

Eagle Speak also remembers the anniversary of the surprise attack on Pearl Harbor and links to others who have also posted on the event.

Steeljaw Scribe has a dramatic illustration of how the Royal Navy has shrunk in size. Not pictured is the loss in knowledge as the number of Navy sailors has also shrunk. So even if you can get more ships, just where do you get the sailors to crew them? (As we have learned earlier, in the case of New Zealand, you grab them from your allies.)

Additional comments on the decline and neglect of the Royal Navy cen be found at Captain's Quarters.

gCaptain has a photo of the wave damage on the Matson KAUAI. Also, gCaptain, partnering with Sea * Fever, has entered the world of podcasting with their first maritime podcast.

Commenter BigFish answers my request for some details on arresting a ship:

Arrest of ships : It is a somewhat complicated matter and you need to know a little bit of maritime law to understand all the intricacies. It depends upon the applicable law in the country of arrest (or even in the State, for federal countries such as the US), whether the country is signatory of specific international conventions and the rest of it. Have a look here and scroll down to pick up your favorite country :
http://www.shiparrested.com/publications.jsp
Hope it will assist ! - MM 87

Thanks much for the comment! Now perhaps someone can comment on how Greenpeace has so far managed to avoid getting their ships arrested as part of collecting on lost income from their blockading of ships.

Life of a Sea Wife explains the difficulty in planning the holidays while your husband is looking for a ship.

BitterEnd has "Right of Innocent Passage" noting that the right is often exercised around the US-Canadian border.

Opinion Journal has a story about visiting where parts of the USS ARIZONA that were removed from the vessel during construction of the memorial are stored.

EU Referendum covers the results of an audit of the EU's Common Fisheries Policy (CFP) in which the policy is declared a failure and then recommends more of the same.

Sea * Fever has the video investigative report on the accident on the tall ship PICTON CASTLE leading to the death of Laura Gainey.

Chaotic Synaptic Activity has in his weekly series 'Monday Maritime Matters' the story of US Army Private George Watson who has been honored by the Navy by naming the USNS WATSON after him. (If you check his site late enough in the day you should also be able to catch this week's edition.)

International Marine Consultancy has "Towage is not Transportation"

The country of Denmark has been working on a plan to turn itself into a shipping Center of Competence (More so than it already is) and they want foreigners to go work in the maritime Industry there. It helps to welcome foreigners into your country when there is a labor shortage, which Denmark is currently suffering from. However, it is good to know before you move that one of the reasons for the shortage of labor is because skilled Danes are fleeing their Country's shockingly high 63% income tax rate. The International Herald Tribune covers the story in "High income taxes in Denmark worsen a labor shortage".

Kiwi at Sea is pulling rocks up from the sea floor.

Some communities have begun putting up signs warning drivers to ignore their GPS devices on rural roads. But signs seem to be less and less effective as people increasingly rely more on GPS systems and less on maps, common sense or their own eyes.

"We've heard some very hilarious stories where people just blindly follow the sat. nav. instructions," said Vince Yearley, a spokesman for the Institute of Advanced Motorists, using British shorthand for "satellite navigation." "Like if the sat. nav. says, 'drive into this muddy field,' they think, 'that's weird,' but they do it anyway." - IHT

And yet, people think it is a good idea for VTS to pilot ships from an office ashore. At least the seafarers will have someone to point a finger at when the accident happens.

Cruise Bruise has "Star Princess Cruises To Antarctica". I did mention in Maritime Monday 86:

The large cruiseship STAR PRINCESS is heading off to Antarctica in January. But be warned, the ship is not Ice-classed (Class: +100A1).

Go read Cruise Bruise's take on the subject. Seems there is no shortage of people willing to sign up, despite a lack of marketing the adventure. He makes a good point, I only found it by using Google.

Shipping Times (UK) has coverage of backing by the Scottish Government for a medal to honor hundreds of Scots who perished when the RMS LANCASTRIA was sunk during WWII.

The RMS Lancastria was a Cunard liner sunk on June 17, 1940 during World War II with the loss of an estimated 4,000 plus lives. It is the worst single loss of life in British maritime history and the bloodiest single engagement for UK forces (in terms of lives lost) in the whole of World War 2, claiming more lives than the combined losses on Titanic and Lusitania. - Wikipedia

You can find the LANCASTRIA Association here.

The Horses Mouth has a great photo of a sailboat 'crewed' by harbor seals. No mention if the condition of the boat is a result of their presence or if that is what attracted their attention.

Fogonazos has photos of "The Salton Sea disaster"

Ross Fotheringham has posted photos of one of the Washington State Ferries in heavy Seas. Hope the cars on the car deck had their windows rolled up. This way you'll limit getting salt water to just the outside and undercarriage as well as inside the ventilation system. 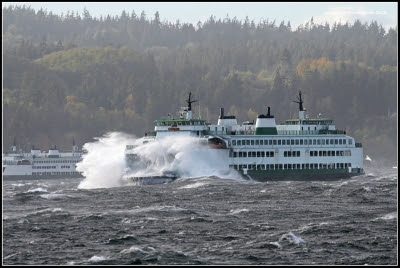 Greenpeace (You have been warned) labels Japan as a 'Tuna Destroyer'. Don't bother trying to leave a comment unless you are going to praise their actions. They are heavy handed with their comment delete key, even if the criticism is constructive. While we are talking about Greenpeace, how is it that (according to Equasis) the RAINBOW WARRIOR has not had a port-state inspection since early 2003? (The ship is registered in the Netherlands.)

70 South covers the renaming of the Sea Shepherd's whaling protest ship from ROBERT HUNTER to STEVE IRWIN, yes that Steve Irwin. Last whaling season the ship ran into flagging problems (Their registration was revoked as no country was interested in being responsible for the damage the ship was attempting to inflict on Japanese whaling vessels). The ship is currently registered in the Netherlands with IMO number 7340370 as a 'Fishing Support Vessel'. Lloyds withdrew as classification society earlier this year with no replacement noted. I wonder why it took so long as they have had surveys outstanding since at least 2004. Their other vessel, the FARLEY MOWAT continues to be flag-less, which should make it easier for the Japanese if they ever decide to shoot holes in the hull.

While watching CBS's Amazing Race last night, it was interesting to see how many of the teams had no clue how to row a boat: 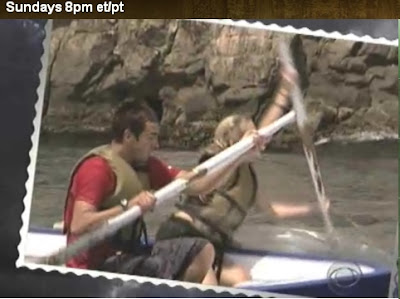 The Stupid Shall Be Punished has "It's Submarine Christmas Photoshop Time Again!"

Mutiny at Indian Register - MUMBAI 03 December – Around 40 qualified surveyors of Indian Register of Shipping (IRS) have tendered their resignations, protesting at mismanagement. They have asked the IRS board to remove their chairman Capt JC Anand and managing director S Kumar and get professionals to manage the organisation. Sources said many officials had left IRS over the past year, complaining at mismanagement. The shipping directorate (DGS) had recently entrusted IRS with additional responsibilities including certification for Indian-flagged ships. IRS has been undertaking certain flag state control functions such as surveys and certification and some other statutory obligations on behalf of DGS. IRS, an independent technical organisation with board members from shipping ministry – including the DGS secretary, chairmen of port trusts and an SCI director, was set up in 1975. It is an associate member of the International Association of Classification Societies and has provided classification for 1,100 ships, including 10% foreign-flagged ships. - Fairplay Homepage (Used with Permission)

Thanks for the link. I was busy with my hands in two computers and had to decompress, but did do "Monday Maritime Matters" today (Tuesday).

SP5 Eric Gibson, US Army, MOH, is the subject...with a link to space!