Here are some photos from the web pages of Westwood Shipping Lines:

Westwood provides superior transportation services to a broad spectrum of customers. With our new generation of combination Container and Breakbulk “Con-Bulk” vessels, we incorporate the latest technology to safely handle and transport a variety of cargo. 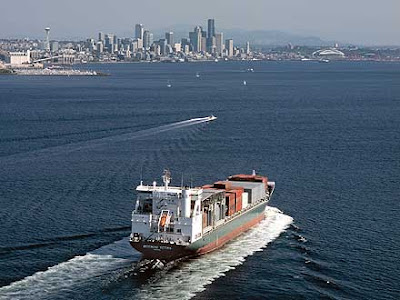 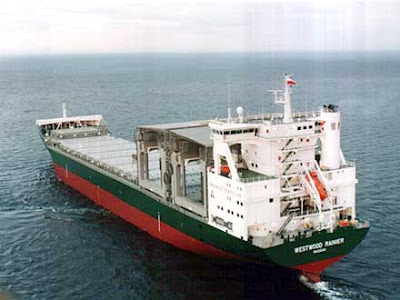 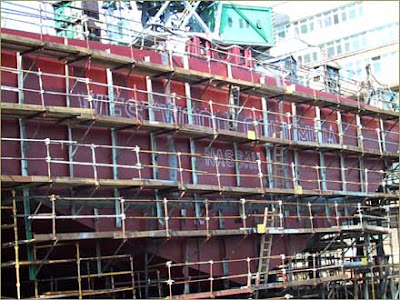 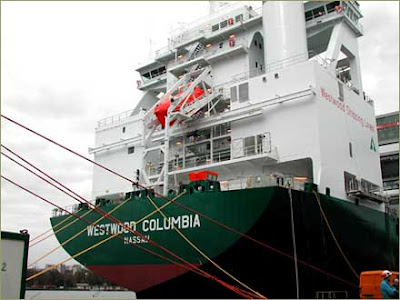 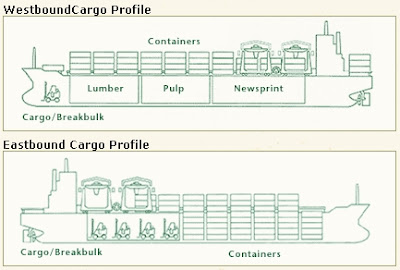 Eagle Speak has "IMO to Somalia: "Do something about piracy!""

Also be sure to check out Eagle Speak's weekly series "Sunday Ship History: Big Inch and Little Big Inch" covering one of the US's responses to the u-boat threat at the start of WWII.

Chaotic Synaptic Activity's 'Monday Maritime Matters' covers the origins of NOAA, whose founder was also honored through the naming of the USNS ALBERT J MYER (T-ARC 6). 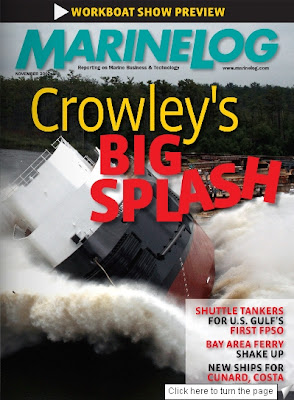 Maritime Accident Casebook has "MAC Answers: I was wondering if investigations such as that for the Explorer are ever open to the public"

The Swedish Seaman's Service has a "Nordic Photo Contest for Seafarers"

The deadline is 31 December. 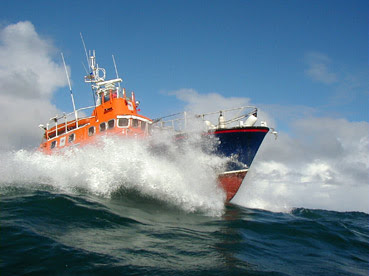 gCaptain hits the nail on the head with his post titled "Ridiculous Item of the Month - Madatory VTS Instructions". (Kind of like doing what your GPS navigator tells you but including when to slow down and speed up.)

gCaptain also has an example of why seafarers need to be highly trained in "USCG Cruise Ship Medivac - Video". Of course the gold star goes to the Helo pilot, but he would not even have attempted this had he not been able to trust the Ship's officers to place the ship in a position for him to approach in the first place. As you can see, there is not much room for error.

Sea * Fever has "“Laura Gainey was an unlucky victim of the risk that she took by electing to go to sea”" including serious allegations of coverup during the investigation of her being washed overboard from the tall ship PICTON CASTLE.

EU Referendum calls the EU's Galileo GPS Program the "Lie in the sky" suggesting that the EU still is greatly underestimating the cost to get their own GPS System up and running, considering that the US is planning to spend even more than them, just to upgrade their existing system.

Wikipedia has an entry on the SS CITY OF FLINT:

SS City of Flint, a freighter of the United States Merchant Marine, was the first American ship captured by the Germans during World War II. Under the command of Captain Joseph H. Gainard, City of Flint first became involved in the war when she rescued 200 survivors of the torpedoed British passenger liner SS Athenia (Note: the first British ship to be sunk by Germany in World War II.) on 3 September 1939. The Athenia was torpedoed by the German submarine U-30 that afternoon, and sent out a distress signal. Several ships responded. The Captain of HMS Electra, LCDR Sammy A. Buss, was Senior Officer Present, so he took charge. He sent the destroyer HMS Fame on an anti-submarine sweep of the area, while Electra, another destroyer HMS Escort, the Swedish yacht Southern Cross, the Norwegian cargo ship Knute Nelson, and the City of Flint rescued the survivors. Between the ships, about 980 passengers and crew were rescued; only 112 people were lost, and Athenia sank the next morning. - Wiki

Go read the whole amazing story of the capture of the FLINT, read who we can thank for freeing the ship and it's fate.

Maritime Links Editor's Blog has "Updated Post-Graduation Requirement for Kings Point". Essentially, new graduates have to sail, either US or on foreign flag (those companies with agreement with MARAD). This leaves related shoreside positions open (reserved) for state-school graduates. Of course the requirement is merely the minimum. My resignation request for the Navy Reserve has been 'in-process' for a year now.

Tugster has great photos of an ITB (Integrated Tug-Barge) in drydock. Go and take a look, and wonder, just where is the hull of the 'tug'?

CDR Salamander has more money-funding problems for the Navy's shipbuilding program. Well the problem does not appear to be lack of money, but the obscene cost of what they intended to do with it. (And when I say obscene, that is in the context of how the Government spends. i.e. $8,000 for a screwdriver that they normally pay $800 for and we pay $2 for.)

SAILORS, MARINERS & WARRIORS LEAGUE has the newest US Army ship; the USAV MAJ. GEN. ROBERT SMALLS (LSV-8). Yes, the US Army operates boats and ships. Makes you wonder who is in charge of their shipbuilding program? Maybe they can help out the Navy with it's shipbuilding disaster.

Marine Buzz has interesting photos of launching a ship with large inflatable rubber tubes. It is a very novel idea.

Shipping Times (UK) has "HMS DIAMOND launch - in pictures and video". It is pretty amazing to see thousands of people attend a ship launch. I have to confess, I have never been to one, although not from any lack of desire to.

Tim at Tims Times was waiting to join a ship last week. Apparently, he was not looking for coffee during his wait.

Bitter End has the latest on the mess that is the Washington State Ferry System.

Marex Newsletter has "Cosco Busan "Arrested"" (Yes, ships too can be arrested. Can someone provide a decent link explaining the process?)

Never Sea Land has news that the Fiji Island Vatu Vara is up for sale. Seems expensive for being so remote, but I guess its all relative, and the reason why someone will want to pay the asking price. Still, it doesn't look like your getting lots of island for the buck. I can think of better things to do with that much money.

Sound of Cannons has "Law Of The Sea Treaty: Lets Get Rid Of This"

The Monitor has "SOLAS will retire classics". SOLAS is the International Maritime Organization's 'International Convention for the Safety of Life at Sea'. The classics are the world's classic cruiseships. SOLAS is being updated and he lists many of the older cruise ships that are on it's hitlist.

English Russia has "The On-Ground Ferry" Go take a look at road conditions in Russia. (This reminds me of 'Shore pilots', basically a guide to navigate you around while on shore leave.)

Shipping Law Times has "Criminal Prosecution of Seafarers in India" noting that seafarers are 'sitting ducks' and easy targets, but you knew that already. 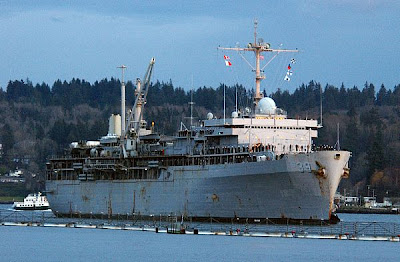 Cyprus-Forum provides an example of what happens when asinine politics gets in the way of solving practical logistical problems. (See below for a second example.)

Washington – surface-water runoff is largest contributor to pollution - The Washington State Department of Ecology issued a news release stating that surface-water runoff from land is generally the largest contributor of toxic chemicals to the waters of Puget Sound. The agency conducted a study on the Control of Toxic Chemicals in Puget Sound. The data regarding relative contributions from the various sources of contaminants is intended to help guide decisions about how to most effectively direct resources to resolve toxic contamination issues. Interestingly, the report finds that oil spills directly into surface waters during the past six years were a relatively small source of toxics compared to the amount of oil that reaches Puget Sound from surface runoff. Note: It remains to be seen whether government agencies will ever devote as much effort to deterring and penalizing land-sourced water pollution as they devote to penalizing ship-sourced pollution, even though the evidence consistently shows that land-sourced pollution is the greater threat. (11/30/07). - Dennis Bryant Holland & Knight homepage (Used with Permission)

Congress rethinking 100% scanning - NEW YORK 28 November – Many in the US Congress now realise that trying to impose scanning requirements on foreign ports was a mistake and the measure may be reversed – but not just yet. Republican Senator Susan Collins of Maine told Sea Sentinel this week that many of the proponents of the 9/11 Implementation Act now understand that the 100% scanning mandate is unworkable and they would be willing to repeal it, but Capitol Hill insiders said that it is unlikely such a vote could come before next November’s elections – for political reasons. “Getting Congress to change laws is hard,” says author and former Coast Guardsman Stephen Flynn. He adds that many people overseas see US diktats such as the scanning measure as “schizophrenic”. He says they cannot understand how a country that denied terminal ownership to a foreign company like DP World on security grounds now wants foreign companies – including DP World – to scan US-bound cargoes. Collins, who is ranking member of the Senate Homeland Security Committee, and her counterpart in the House, New York Republican Peter King, both told the Maritime Security Expo yesterday that maritime security will be better achieved through co-operation between the industry and government than by governmental edicts. - Fairplay Homepage (Used with Permission)

ITF speaks out on weighty issue - LONDON 22 November – The under-declaration of container weights is a problem “crying out for investigation”, says the ITF. “This is a widespread problem,” claims ITF spokesman Sam Dawson. “The fact that the weight of containers is under-declared, or containers carrying hazardous cargo are not declared as such, endangers workers right along the supply chain. Dockers, truckers and their unions are working jointly to… lobby international organisations for a cross-sectoral safety regulation.” He was responding to Shipping Australia CEO Llew Russell’s claims that the issue is becoming a major problem in New South Wales. “A couple of tonnes may not seem a lot to an individual exporter, but multiplied by many containers it can seriously affect ship loading and safety,” he told Safety At Sea International. Captain Neale Rodrigues, director of Loss Prevention at Charles Taylor & Co, offered his opinion on possible solutions: “The ideal would be to ban shippers who persistently overload containers, but this is not always practical. The reality is that the ship needs to double check all the cargo they receive, and perform additional stability calculations after loading, if there is time." - Fairplay Homepage (Used with Permission)

Previous Editions:
Here or click on the label below 'MaritimeMonday'.
.
Posted by Fred Fry at Monday, December 03, 2007

Fred Fry,
Thanks for the link:)

Arrest of ships : It is a somewhat complicated matter and you need to know a little bit of maritime law to understand all the intricacies. It depends upon the applicable law in the country of arrest (or even in the State, for federal countries such as the US), whether the country is signatory of specific international conventions and the rest of it. Have a look here and scroll down to pick up your favourite country :
http://www.shiparrested.com/publications.jsp
Hope it will assist !