Russia has been in the news lately for all sorts of stunts. Recent nationalistic acts include:

Now you might think that it's their increased oil revenue due to high oil prices that is funding their increased operations abroad. However, that is not exactly true as you help pay for these activities. Here is a breakdown of the money the US provided to Russia as aid for 2006. As you can see it totals almost a billion dollars. ($3.16 for each American. $12.66 for my family of four.)

The majority of these funds were slated for 'Security & Law Enforcement' which is defined as:

Security and Law Enforcement Programs. U.S. Government programs in Russia that consolidate, secure, or destroy and dismantle weapons of mass destruction account for the lion’s share of U.S. Government assistance to Russia in Fiscal Year 2006.

These programs support one of the U.S. Government’s highest priorities in our relations with Russia: facilitating cooperation to reduce the risk of proliferation of weapons of mass destruction (WMD). The Defense Department’s Cooperative Threat Reduction (CTR) Program assists Russia with the destruction of strategic missiles and delivery systems, the enhancement of security for Russia’s nuclear weapons in storage and during transport, and the construction of a facility for the safe destruction of chemical weapons.

In order to improve interoperability with coalition or NATO forces, the International Military Education and Training (IMET) Program provides training in English, in peacekeeping operations, non-commissioned officer development, search and rescue, civil/military interaction, and military medicine for military and civilian officials of the Ministry of Defense. The program is moving from strategic to tactical interoperability, focusing on the future of the Russian peacekeeping brigade.

The State Department-led Export Control and Related Border Security (EXBS) Program assists Russia in stemming the proliferation of WMD, their delivery systems, and related technologies. The program also offers assistance on many facets of nonproliferation including building better strategic trade controls in the areas of licensing both dual-use and munitions items, enforcement activities ranging from detection, interdiction, investigation, and prosecution of proliferation relevant incidents; government outreach to help industry understand their need to comply with strategic trade controls, and the legal and regulatory structure of nonproliferation in line with international standards.

The State Department’s Anti-Crime Training and Technical Assistance Program supports diverse activities, including: implementation of the July 2002 Criminal Procedure Code and the August 2004 Law on Witness Protection; adoption of modern investigative techniques in the fight against narcotics trafficking, trafficking in persons, money laundering, terrorist finance, and cybercrime; the development of U.S.-Russian legal cooperation under the Mutual Legal Assistance Treaty; adoption of community-based policing in the Sakhalin region of the Russian Far East; the protection of intellectual property rights; and support of research into crime and corruption in Russia.

So while Russia is going back to it's old habits of being an international neusence and having fun, we are the ones paying to clean up their old radioactice messes. How convient is that! After all, it is hard to build up national pride by doing things like environmental cleanup. That would require telling the population what a disaster your country is. Let the Europeans, Japanese and Americans take care of the messy work.

For example, remeber the sinking of the submarine KURSK? Despite it being such a tragedy in Russia and President Putin claiming that all would be done, guess who paid to raise and then dismantle the submarine? You did:

The Kursk Foundation has appealed to leaders of the European Union, Japan, the US, Canada, and Norway to grant Russia money for raising the submarine Kursk. The foundation asks each of the countries to give 1.9 million euros ($1.7 million). The appeal was signed by co-chairmen of the foundation: former foreign minister of the USSR Alexander Bessmertnykh and former Defense Minister of the Netherlands Willem van Eckelen. They asked leaders of the aforementioned countries not to delay. If the submarine is not raised this year, this operation will be much more dangerous next year, if it is possible at all.

This appeal is a desperate gesture. The Russian government has not allocated $25 million to the fund. Without this money, the American-Dutch-Norwegian consortium refuses to start preparations for the operation. If these preparations are not started in March, the submarine will not be raised this year, since weather conditions only make it possible to make the attempt in summer. - WPS 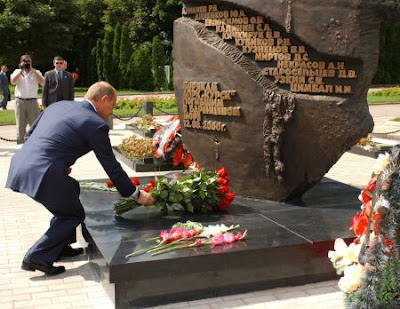 President Putin at a KURSK Memorial
Here is an explanation of how we got ourselves into this situation:

Since the announcement of the G8 "Global Partnership against the Spread of Weapons and Materials of Mass Destruction WMD" issued by the world's eight leading industrial nations - Canada, France, Germany, Italy, Japan, the Russia Federation, the UK and the US - at the G8 Summit on June 27th 2002, the issue of general-purpose submarines, or non-strategic submarines, has become a topic of the top political agenda.

The G8 Summit participants pledged $20bn to fund non-proliferation programmes in Russia - the initiative referred to earlier as "10 plus 10 over 10", meaning $10bn from the US and $10bn from other G8 counties over 10 years to secure Russia's vast stockpiles of weapons and materials of mass destruction. - Bellona

Ten Billion dollars to secure Russia's nuclear threat is probably a good deal. The damage from one rogue nuke would probably cause much more damage than that. However, with all of this should be some responsibility on behalf of Russia. The $20 billion does not address all of Russia's cleanup problems. By stepping in like we did, we are allowing Russia to ignore its other responsibilities. As we have seen in the news, if we do not keep Russia busy at home, they will find something to keep them busy but in Estonia, in Georgia, and wherever else they please in Europe and around the globe. At some point they need to be pushed to spend money at home to modernize their country and serve their people. The sooner the better.

(Of course there is also the issue of the Country being stripped of its assests and taken to bank accounts outside the country. Lots of money, but none of theirs for Russia.)

U.S. Assistance to Europe and Eurasia - US Dept of State