This Weeks Photos:
Here are a couple of photos of a self-propelled barge. As you can see, the hull splits open to permit dumping of whatever was loaded into it, which in most cases would be material dradged from shipping channels or material to reclaim land from the sea.

This specific vessel is for sale. It is listed here at Apollo Duck. 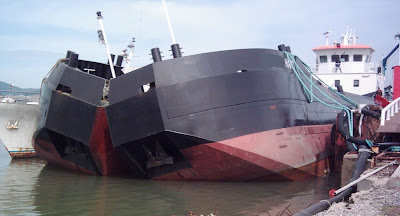 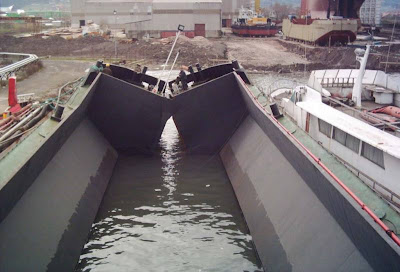 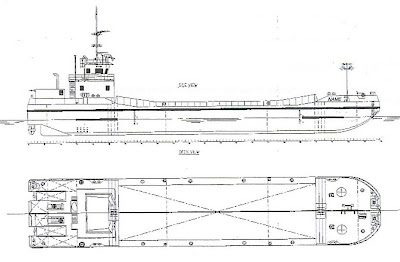 This Weeks Items:
Eagle Speak has "Thinking ahead: Polar sea routes and the U.S. Coast Guard" and news of the approval of expansion plans for the Georgia Liquid Natural Gas facility near Savannah.

A Blog For All covers the exposing of video footage of Russia planting a flag at the bottom of the Arctic Ocean as a fraud, lifted from the movie Titanic. The scam was discovered by a 13 year old boy in Finland, who probably now needs to go into hiding before President Putin mails him a thank you present laced with radioactive material.

Molten Eagle had questioned earlier if Russia would risk faking a descent. Whether they did it or not remains an open question, but why didn't they take pictures while at the bottom? (If our subs were there and can confirm that they did do it, how about earmarking a couple million to go and collect their litter.)

Steven Bennett’s Photo Blog has dramatic photos of the Panama-Flag cargo Ship NEW FLAME as it sinks off Europa Point after colliding with the tanker TORM GERTRUDE. Details at Gibraltar News. Apparently, as of this morning, the vessel was spared sinking fully as it is partly aground.

Bellona has the Murmansk Shipping Company's refit of the nuclear Icebreaker SEVMORPUT into the world's first nuclear powered oil drilling vessel which should be operation by early 2009. (And you thought that Russia's flag littering was just a stunt.)

gCaptain has "Bravo on My Watch - By The Artful Blogger" which tells the story of a fire in the engine room of an un-named cruise ship and the less-than textbook quality response. How bad? Lets just say that it is amazing nobody died. Not because of the fire but as a result of the response.

gCaptain also has the fire onboard the USNS SISLER while in drydock in Boston.

The BBC has the Law of the Sea tribunal's ruling ordering Russia to release a Japanese fishing trawler.

Tim at Tims Times (at sea) returns to sea.

Kiwi at Sea (at sea) explains what he has been up to over the last two months.

Steeljaw Scribe has "The Long War — Russia and the Russian Navy"

News.com.au has the arrests of four people for attempting to smuggle $20 million in ecstasy into Australia off the Panama-Flag MSC SOPHIE.

Freaque Waves covers the freak wave or abnormal tidal bore (Wikipedia entry) in the Chien Tang River in China that washed away 33 people.

BitterEnd has the Coast Guard's reduction in the number of fog horns, as the result of modern technology. The same is happening to lighthouses.

Tugster: a waterblog has "Red Hook Mysteries" where he speculates whether the incoming Ikea store being built on the site of the old Todd Shipyard will bring in it's containers by barge upon sighting a tug in Ikea colors. He has pics of the offending tug. Maybe Ikea just paid for the tug to carry their colors. Actually transporting the containers across the harbor might only make sense if they were arriving in large enough batches. Once you read this post, check out the rest of his blog which is full of NY Harbor photos.

INDIAN SHIPPING NEWS has the shortage of qualified shipping personnel. The story cites payment of taxes when Indian seafarers sail on Indian-flag vessels as opposed to sailing foreign-flag. Another reason I know of is that there are many certified Indians, especially officers, who are not able to obtain certification in their own country. Maybe this shortage will change that, but I doubt it. (Yes, there is a question how some got their documents, but many of them were weeded out when new rules came into effect in February, 2002.)

Maritime Compass has the possible discovery of a lifering from the EDMUND FITZGERALD.

The Astute Bloggers covers a story about coral bleaching, but this time blamed on cold weather, instead of the normal culprit of high temperatures due to global warming.

The Southeast Texas Record has a lawsuit claiming that his injury on the oil drilling rig PRIDE ALASKA was a direct result of poor placement of valves and their poor maintenance making them hard to turn.

Cruise Bruise has coverage of the MARINER OF THE SEAS cocaine smuggling court case.

Maritime Accident Casebook has a ship casualty in Basrah, Iraq, which was spotted from space through Google Earth.

Cruise Critic covers 'Crew Blogs'. According to the article, 'Captain Geir-Arne's Photo Gallery' is the only one that does not have the hand of the employer involved in it. (That does not mean that the others are not worth checking out.)

English Russia has photos of the USSR's first expedition to the Antarctic continent in 1955.

G2Mil has a chapter out of Carlton Meyer's new book,"The Spectrum of Future Warfare". The chapter covers the idea of using some of our older Navy hulls as Bait Ships.

Cato Unbound has an article on self-governance using the pirates’ private system of governance as the example of how this is possible. It provides great insight into signing articles when joining a pirate ship . A practice that continues to this day on merchant ships. (I found this article, thanks to a link on Instapundit)

New Wars links to a number of maritime stories concentrating on Navy issues from around the world.

Neptunus Lex comments on the recent Russia flight to Guam in "“In Soviet Russia, Bear hunts you“". He also has video of a fish being launched off a carrier catapult. No, don't worry, the fish is part of the jet's crew. Stick through the video if you want to see a bunch of pilot call signs.

UK – MAIB Safety Digest - The UK Marine Accident Investigation Branch (MAIB) issued the Safety Digest 2/2007 summarizing recent marine casualties. The report emphasizes the importance of keeping a good lookout and, particularly for smaller vessels, making sure that your vessel can easily be seen by others. (8/6/07). - Dennis Bryant Holland & Knight homepage (Used with Permission)

Maritime 'vulnerable to fraud' - COLOMBO 10 August – Shipping lines, exporters and banks are vulnerable to fraud because it is easy to forge trade documents and break into containers without leaving any signs, warns Pottengal Mukundan, director of the International Maritime Bureau of the International Chamber of Commerce. "Trade finance depends entirely on documents," he told members of Sri Lanka's shipping community at a conference organised by the Sri Lanka branch of the Institute of Chartered Shipbrokers. "Any system which depends entirely on documents will be vulnerable to abuse by money launderers. Any document in a shipping or trade transaction can be forged, and forged with ease." Documents such as bills of lading involving millions of dollars worth of transactions "have no security feature whatsoever," Mukundan said, adding that criminals find them easy to duplicate and even produce the actual document itself. "Getting documents prepared and passed through the banking system is easy," he said. Containers are also a weak link in the system and "a great vehicle for fraud," Mukundan said. "No one really knows what's in a container because it is sealed. It can be used to transport anything – weapons, people, drugs." There are at least five ways to open a container without breaking the seal, he said, and it was even possible to make a container ‘vanish’ by changing its seal number. People trying to get the cheapest freight rate and who do not perform due diligence can find themselves in trouble. "The message underwriters tell cargo owners is don't put your cargo on the first rusting hulk that calls in the port,” Mukundan said. - Fairplay Homepage (Used with Permission)

Previous Editions:
Here or click on the label below 'MaritimeMonday'.
.
Posted by Fred Fry at Monday, August 13, 2007