This Weeks Photos:
The following photos were provided by Bob Couttie who runs the Maritime Accident Casebook. Here is an extract from his 'About MAC' page:

Sea transportation remains the most cost effective and environmentally friendly way of getting goods from one side of the world to the other, yet it comes with a cost - maritime incidents cost around $1 million a day. Not all incidents are disasters, not all make headlines, but in nearly every case human factors present the most significant element in the incident.

The objective of Maritime Accident Casebook is to empower seafarers to keep themselves alive and keep their ships from harm by offering lessons from real world events that they can use in their daily work, whether deckhands or masters. - About MAC 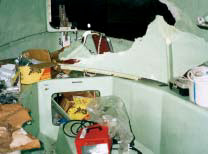 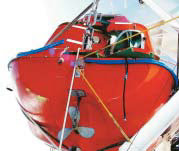 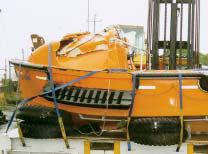 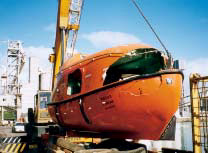 Thanks to Bob Couttie for the submission.

This Weeks Items:
To continue with lessons learned from lifeboat drills, Cargo Law has photos and an update on "Pepito Flores Did Not Need To Die." He died during a lifeboat drill on April 5 2007 In Korfu Harbor, Greece.

Many people experience a short-term sensation of movement after a motion event such as being on a boat or treadmill. Episodes generally occur for short periods of time after the motion event has taken place. This is sometimes referred to as "land-sickness" which is comparable to sea-sickness. However, in the case of MdDS sufferers, it can persist for many months or even many years, often leading to various stages of disability. There is no known cause or cure, so more direct patient research is needed.

The name of the condition is French for disembarkation sickness. - Wikipedia

They have a list of stories from sufferers here.

This is probably a disease that most every seafarer can claim that they are suffering from, many without even knowing that they are sick, unlike the common reason for seafarer lawsuits, backpain. So, bring on the lawsuits! (As I said before, cruise ships are inherently dangerous places. Whether or not this is a legitimate disease, those suffering from it believe it is.)

Bob Krumm has more on the DELTA QUEEN scuttling including this comment:

The Cincinnati Enquirer reported that Senate Commerce, Science and Transportation Chairman Daniel Inouye, D-Hawaii, ”would not support the exemption unless the Seafarers International Union gets behind it.”

So how many union support jobs (longshormen, contractors, etc.) are going to be lost once there is no longer a ship to service?

Robin Storm has all your hurricane information.

gCaptain has a must-see video of an engineer 'Riding the shaft'. There is no mention which vessel this might be. Here is some video of the propeller shaft of the T.S. STATE OF MAINE. (T.S. = Training Ship)

SAILORS, MARINERS & WARRIORS LEAGUE has the $8 million flight deck addition to the Australian oiler and replenishment ship HMAS SIRIUS that is unusable. (With all the Navy, Coast Guard and now this Australian Government-example, perhaps governments should let private shipping companies handle their shipyard escapades. After all, you don't hear about commercial vessels being crippled as a result of a shipyard period.)

Just to drive the point home, CBS's 60 Minutes re-ran their May hit piece on the US Coast Guard Deepwater Program titled "The Troubled Waters Of "Deepwater"", which included an update on the situation.

SAILORS, MARINERS & WARRIORS LEAGUE also has coverage of the collision between the Turkish ferry SALIH REIS-4 and the Ukrainian-flagged cargo ship SEMYON RUDNEV which was at anchor.

I help Tugster locate information on the GREY SHARK which he spotted in NY Harbor. As it turned out, the ship had recently changed name and flag, resulting in the ships tiny internet footprint.

The Torch (Canada) has "The icebreakers we should build"

Marine Link has coverage of the refloating of the Egypt-Flag AL SHAYMAA after capsizing during discharge in the Netherlands.

Maritime Links Editor's Blog has an update on the Coast Guard Mariners Court.

The Virginian-Pilot has the first container cargo for the new APM Terminal in Virginia. 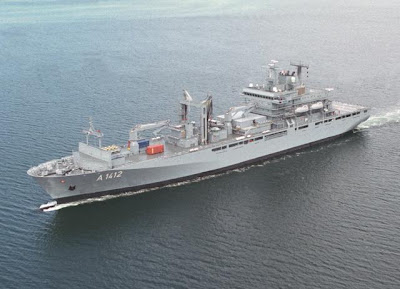 The Pilot Boat has some photos from last year's “Tall Ships Regatta” in Lisbon.

MSNBC has "Jobs that you wish you had". The Cruise Ship Captain...

GreenPeace's Making Waves blog has "Stop the slaughter of sharks in Ecuador".

Pirates Ring Blog has a post about pirate flags.

The Washington Post has a guilty plea for the owners of the SELENDANG AYU which went aground in Alaska in 2004. 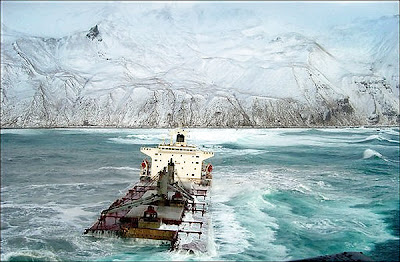 In this photo released by the U.S. Coast Guard, half of the Malaysian cargo ship Selendang Ayu is pounded by waves as it sits offshore of Skan Bay on Unalaska Island near Unalaska, Alaska, in the Aleutian Island chain seen in this Saturday, Dec. 11, 2004, file photo. Owners of a ship that broke up on an Aleutian Island, polluting the Bering Sea and killing thousands of seabirds, will plead guilty to two federal counts, the U.S. Attorney's office announced Tuesday. (AP Photo/U.S. Coast Guard) - Washington Post

ABC (Australia) has calls to investigate the disappearance of tiger prawns from their fishery. The suspect. Overfishing.

Panama Canal – transit record and anniversary - The Panama Canal Authority noted two milestones. The first press release stated that the transit record for daily transits of vessels with an overall length greater than 900 feet was tied for the third time at nine vessels. The second press release noted that August 14 marked the 93rd anniversary of the opening of the Canal in 1914. (8/15/07). - Dennis Bryant Holland & Knight homepage (Used with Permission)

New shipyard in Subic Freeport - SUBIC BAY 14 August – Subic Bay Shipyard Consortium (SBSC), a joint venture of investors bidding for marine projects, is to invest over PhP200M ($4.44M) to set up a new shipyard at Subic Freeport. SBSC signed a contract with the Subic Bay Metropolitan Authority, allowing it to establish the shipbuilding and repair yard at the former US navy ship repair facility area. SBCF president and CEO Nils-Ottar Lonoy said in a statement that the firm would be utilising the so-called ‘slipway and skid system’ to accommodate vessels of up to 90m for drydocking and repair, as a contribution to the envisioned Subic Bay Maritime Industrial Park. Construction of the new shipyard will begin next month, with a target for completion within the next three years, Lonoy said. He added that the company will be holding skills training for Filipino shiprepair workers to complete a 500-strong manpower requirement for the project. - Fairplay Homepage (Used with Permission)

Previous Editions:
Here or click on the label below 'MaritimeMonday'.
.
Posted by Fred Fry at Monday, August 20, 2007