This Weeks Photos:
Here are two images of the STENA ARCTICA. Per Stena's website:

Today, the tanker Stena Arctica will be named in the Port of Göteborg. With its 117,100 deadweight tons, the vessel is not only the largest Swedish flagged ship in the Swedish merchant navy but also the world’s largest tanker with the highest class in service. Its hull is heavily reinforced and its propulsion system is considerably more powerful compared with normal tankers, thus enabling it to safely manoeuvre in the icy waters of the Baltic Sea. The Stena Arctica, together with additional ice-strengthened units and in cooperation with Sovcomflot – the largest shipping company in Russia – will mainly transport Russian crude oil from the Gulf of Finland to the Continent. - Stena Bulk 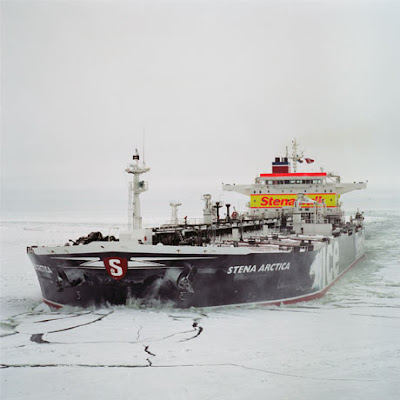 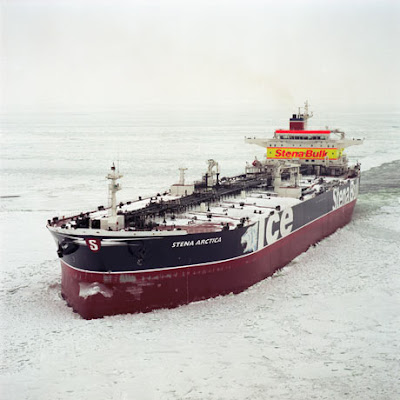 MarEx Newsletter has more on the Massachusetts Maritime Academy Training Ship Conversion of the T/S ENTERPRISE, the different parties involved, and of course, the money involved.

Secular Blasphemy has the story of a shipping container of mail finally being delivered to Russia after sitting in a Finnish Port since 1999. (I wonder what the storage fee for that cost!)

AutoBlog covers Mazda's decision to scrap all the Mazdas that were onboard the almost-capsized COUGAR ACE.

Molten Eagle has Russia's nuclear-powered lighthouses that are being targeted by thieves who then die due to the radiation exposure. One stolen emitter was even left at a bus-stop, radiating those lucky enough to be nearby. A complete summary of these RTGs (Radioisotope Thermoelectric Generators) and events involving them can be found at Bellona. In general, Russia's handling of nuclear material is inexcusable. In fact, it should be declared a crime against humanity.

The Daily Mail (UK) has a story titled "Call to cut sailors' 85-hour week." (Note: Sailors work seven days a week BUT most should not be working more than an average 12 hours/day. And No, you cannot always decline overtime especially when the captain calls 'all hands' for docking/undocking.)

Seattle Times has the story of Federal subpoenas delivered from Alaska to Trident Seafoods and Icicle Seafoods in Seattle and the At-Sea Processors Association. Apparently US Senator Ted Stevens and his son are being targeted in this investigation.

Offshore Shipping Online has recycling of single-hull tankers into heavylift vessels, in this case for Frontline Tankers.

Homeland Security Watch notes the sale of US Port Operations to a US entity. So I guess we can all feel a little safer. Which probably means that you should not look into this port threat.

Check out the website of the icebreaker USCGC POLAR SEA as it heads to Antarctica escorting supplies for McMurdo Base as part of Operation Deep Freeze 2007.

Divester has the adoption by the UN of a Sustainable Fisheries Resolution including calls to curb bottom trawling.

GreenPeace's Ocean Defenders Blog has news of Espersen's closure of their cod processing factory in Denmark due to a lack of cod.

No Hurry In JC (Jersey City) gives a realistic assessment about being a passenger on a cargo ship.

NewMexiken reminds us of the anniversary of the Boston Tea Party.

The website AISLIVE.COM has global tracking of merchant shipping. For example take this snapshot of traffic sailing through the Dover straits. It is one of those places where a 3 mile CPA (Closest Point of Approach) just does not work. My first trip through there was on a ship overtaking everyone by about 5 knots. The Second Mate was not used to that, with his past experience being on research vessels doing 2-3 knots with 'Restricted in Ability to Maneuver' lights burning bright. the Captain went ballistic when he found out that the 2/M had slowed down. 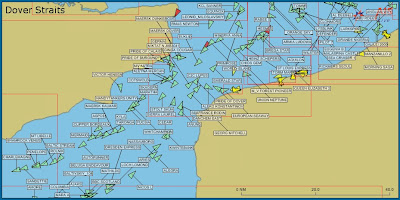 The website requires a subscription, but it is free. (www.aislive.com) And yes, there are traffic lanes in the sea. Imagine what this picture would like like if there weren't.

UK – seafarer pleads guilty to forgery - The UK Maritime and Coastguard Agency (MCA) issued a press notice stating that a seafarer applying to upgrade his license to Master (Unlimited) has pleaded guilty to forging documents to show sea time on two vessels in which he never actually served. He was sentenced to 200 hours of community service plus £250 costs. (12/14/06). - Dennis Bryant

Chief engineer Artemios Maniatis, 55, and 1st engineer Dimitrios Georgakoudis, 29, were indicted by a federal grand jury on one count of violating the Act to Prevent Pollution from Ships, the same charge that a Texas federal judge recently ruled (in an unrelated case) cannot be applied for foreign-flagged vessels unless the dumping took place in US waters; like the ship in the Texas case, the 149,000-dwt Kyriakou is registered in the Marshall Islands.

In this matter, a whistle blowing crewman tipped off the Coast Guard early in November that the vessel had been using a “magic pipe” to dump oil on the high seas.

According to the statement from US Attorney Kevin V Ryan, the government is continuing to investigate the ship's owner, Free Seas Shipping, as well as its operator, Athenian Sea Carriers. If convicted, the two men could face up to 10 years imprisonment and a fine of $250,000, plus restitution – with a portion of the fines going to the whistleblower. Lloyd's Register - Fairplay Homepage (Used with permission)