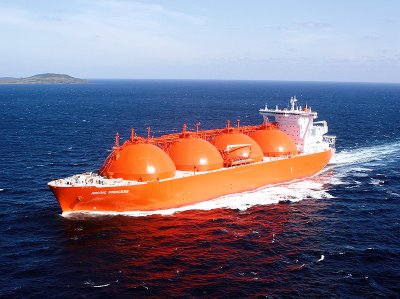 So just what does the inside of the containers look like? 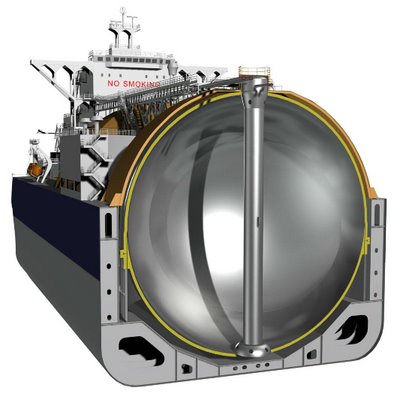 (Keep in mind that LNG is not pressurized)

EagleSpeak covers the temporary closure of the Bosporus Strait due to an accident by a Russian Flag vessel.

American Maritime Officers Union (AMO) announces an agreement with Teekay Shipping to provide officers qualified to serve on LNG Vessels. No mention of the flag the vessels will fly. Teekay currently has no US flag vessels, with currently operated vessels flagged Bahamas and Spain. (The announcement seems to imply that they will be foreign flagged, turning the officers into an export.)

Sailors, Mariners & Warriors League has news of Japan investigating the Captain of the Panama-Flag GIANT STEP for negligence resulting in the grounding and loss of the vessel with loss of life.

Marine Link has an example of the cargo flexibility of a "Superflex Heavy Multipurpose Container (MPC) vessel" with a photo and description of the cargo carried by the RICKMERS TOKYO.

ContractsProf Blog has the news of a marine salvage lawsuit being brought in the Staten Island ferry accident by a tug that came to the rescue.

Jennifer Marohasy has an explanation why Greenpeace no longer pesters Norwegian whalers.

Alaska Report provides a dizzying summary of the 'privatization' of fish in the Gulf of Alaska and how Alaska's Congressmen Don Young and Ted Stevens fit into the whole story.

Malta Independent has coverage of the grounding of the Cruise vessel LYUBOV ORLOVA in Antarctica which required the evacuation of the passengers.

Washington Technology has new concerns about the Transport Worker Identification Credential (TWIC) program. This time concerning the accuracy/error rates of the biometric technology selected. (Personal experience has taught that getting the best possible enrollment is key to avoiding future errors.)

The UN's International Labour Organisation, ILO, has the news that Russia's Duma has ratified the Seafarers' Identity Documents Convention that was revised in 2003. Eight other countries have ratified the convention: France, Jordan, Nigeria, Azerbaijan, Hungary, Lithuania, Moldova, Vanuatu. No word on whether any of the countries is actually issuing seafarer documents with biometric identification included.

BusinessWeek has the Truckers strike in Greece attempting to cutoff all traffic to the Port of Piraeus in response to a three-week long dock workers strike.

One Digital Life has a photo of the contents of a shipping container lost at sea washed up on the beaches of North Carolina. (No. Not rubber duckies this time.)

New Scientist Tech covers Japanese research into reducing the friction drag of vessels in an attempt to make them 'greener' and discovers that what works in the lab on a model might not work so well on a real ship.

Savannah Daily News has a story on "the ancient and honorable art of watching deep-water ships sail in and out of port."

The USS INTREPID Museum website will have live online camera coverage of the second attempt to move the historic WWII aircraft carrier to shipyard renovations.

Gowanus Lounge has the latest on Brooklyn's Red Hook graving dock and Ikea's plans to fill it in.

Shahida Tulaganova, a reporter at the BBC, explains how she obtained 20 fake and stolen EU passports and uses them twice to enter the UK, being told by the passport dealers that border controls are the most lax at UK seaports.

Norway's Statoil has this interactive animation of the LNG Process from the seabed to the LNG Tanker at their soon-to-open Snøhvit LNG Project: 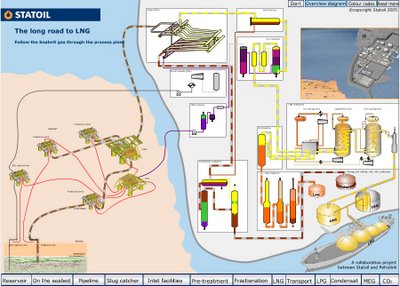 Be patient. It takes time to load!
Haight's Maritime Items has:

Documents required for Western Hemisphere air travelers - The Department of Homeland Security and Department of State jointly issued rules regarding documents required for certain travelers departing from or arriving in the United States at air ports-of-entry from within the Western Hemisphere. Effective January 23, 2007, US citizens and nonimmigrant aliens who are citizens of Canada, Mexico, or Bermuda will be required to present a valid passport when entering or departing the United States via air, with limited exceptions. Of interest to the maritime community, a valid merchant mariner document (MMD) issued by the US Coast Guard may be utilized by a US merchant mariner in lieu of a passport for travel in conjunction with maritime business. Interestingly, a Transportation Worker Identification Credential (TWIC) card may not be utilized because the TWIC card (when eventually issued) will not prove citizenship and the TWIC card cannot be read by the technology currently utilized at air ports-of-entry. This places the US citizen who is not a merchant mariner but travels offshore via vessel, say to an oil rig or a ship outside the 3-mile limit, in an interesting position. If that person (such as a contractor or maritime lawyer) does not have his or her passport and returns via helicopter, there may be great difficulty at the arriving airport. 71 Fed. Reg. 68411 (November 24, 2006). - Dennis Bryant (See Maritime Spotlight homepage for more stories or to subscribe to the daily email.)

Study makes fatigue recommendations - Excessive working hours continues to be a problem for the shipping industry, a major research study has concluded, but there is no simple solution. The six-year study found that almost half the seafarers who took part were working 85 hours or more each week; that working hours had increased over the past 10 years despite regulations intended to combat fatigue; and that one in four admitted to having fallen asleep while on watch. However, a range of strategies will be needed to prevent or manage fatigue because of the different profiles of fatigue risk factors in different working groups.

Recommendations included looking again at how working hours are recorded because current methods are not effective; building fatigue awareness into established health and safety training courses; and developing a checklist-style auditing tool that would help to assess work characteristics known to be risk factors for fatigue and subjective experience of these factors. Brian Orrell, general secretary of officers’ union Nautilus UK called for “a radical and urgent response from the government”, while Mary Martyn, head of the Maritime & Coastguard Agency’s health and safety branch, commented that the agency agreed that a co-operative approach is needed, involving regulators, shipping companies and seafarers.

The study was co-sponsored by the MCA and the Health & Safety Executive, with support from Nautilus UK and the Seafarers’ International Research Centre, and was carried out by a team from the Centre for Occupational and Health Psychology at Cardiff University. Lloyd's Register - Fairplay Homepage

* GUILTY! GUILTY! GUILTY! GUILTY! - (WARRIOR-68) * 01-05-07
Just hours ago the Jury in the U.S. Government versus Michael &
Bobby McKay returned with multiple "GUILTYS," on ALL Counts
against Bobby and "GUILTY" on all but one minor count against
Michael. The RICO Charges, Embezzlement, Election Rigging in prior
Elections and Constitutional Elections were all returned with
Unanimous GUILTY VERDICTS!!!!!!

Expect Major Headlines in tomorrow's News, both Local and Worldwide.

Now the AMO Membership can rightfully open the following:


It should be interesting Monthly Membership Meetings in Dania
Beach on Monday, January 08, 2007, Toledo on Wednesday, January
10, 2007 and Brooklyn on Friday, January 12, 2007. Any AMO Members
attending these Meetings should advise all of what occurs.

Do not expect we will be hearing anything from Reflection,
Worrier-68, Big Red, Frank Conwell, Pat Shinley or
Mississippimaestro.

It is doubtful that the "Official," AMO CURRENTS will report
either, at least not until Mike & Bobby leave for their new HOME!