On behalf of Fred, welcome to this Christmas Edition of Maritime Monday.
For those who work on merchant ships, every day is a work day. Every day of the week for the entire time that they are signed onboard the ship, regards of what holidays may come and what religion the crew may observe.
This Weeks Photo:

Here is a picture of one of the Beluga Whales at the Coney Island Aquarium. There were about 15 people at the window, but this whale only took interest in me and followed me as I went from one side of the window to the other, while ignoring everyone else there. Everyone thought it was pretty amusing, but me. - Fred 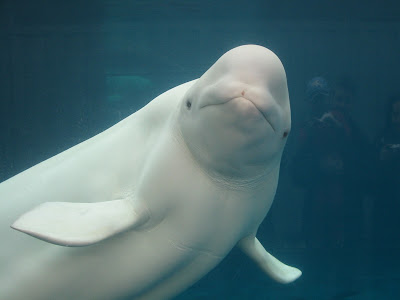 Enjoy ship pictures? Do you take pictures of ships? Well then, ShipSpotting.com is a site for you.

Eagle Speak has the story of some of Santa's helpers who participate in 'Christmas Drop' the longest running humanitarian airdrop which reaches out to isolated islands in the Pacific.

Linkmeister has the importation of Christmas Trees to Hawaii. No shortage this year, but apparently some had a hard time finding a tree stand. It's just something that you have to adjust to when living on an island where most everything arrives by ship.

National Public Radio has a story on Seaman's Church and their efforts to deliver Christmas packages to sailors around the world. Visit Seaman's Church site here and investigate how you can put a smile on a seafarer's face next Christmas through the Christmas at Sea Program. Even easier if you can knit! As a seafarer who was a recipient of one of those gifts while spending Christmas in the North Atlantic on the GALVESTON BAY, I know how much I appreciated it!

Helsingin Sanomat has important revelations concerning the 1994 sinking of the ferry M/S ESTONIA in the Gulf of Finland. The story also links to their previous coverage of the controversy surrounding the sinking. (While not being one to give any credibility to conspiracy theories, there are indeed serious problems with the official report on the sinking as well as some serious questions concerning the Government of Sweden's behavior during the aftermath.)

Marex Newsletter has the agreement between Suez LNG NA LLC and MARAD, the US Maritime Administration, to allow for the employment of US Licensed seafarers on Suez's Norwegian and Spanish flagged LNG Carriers. (This is important as there are no US-Flagged LNG Carriers and officers serving on LNG carriers must have LNG experience.)

Sailors, Mariners & Warriors League has coverage of the Russian Flag KAPITAN KAMRATOV, which is stuck in ice after rescuing seafarers from a Cambodia-Flag fishing trawler.

And Rightly So! has the conflict between saving whales and safe navigation and explains why the International Maritime Organization is involved in a change being instigated in US waters by the Coast Guard.

The International Marine Accident Reporting Scheme has video of a ship running aground in October 2005.

The National Park Service (US) has a list of "Large Preserved Vessels and Shipwrecks."
The BBC has the growing story of the EU's attempts to save offshore fish. Of course, politics will result in killing the fisheries.
Daily Clerks has coverage of the recently approved 'London Array' offshore windfarm, which, if built, would be the world's largest. (Has a great illustration.)

Cruise Bruise has the amusing story of Celebrity Cruise's defense against a $100,000 fine for illegal dumping over a half-million gallons of wastewater by declaring that some of the dumping actually took place legally in Canadian waters (thanks to lax environmental laws). You can image that this has not gone over well in Canada.
Yahoo News has a reminder for WWII Merchant Marine Veterans living in Pennsylvania that the December 31st deadline to apply for a $500 cash bonus is fast approaching.

The Pilot Boat describes pilot boats as well as provides a primer on Shore Based Pilotage.

Steamship Mutual has a copy of the IMO and UNHCR's Rescue at Sea guide of "Principles and Practice as applied to migrants and Refugees." 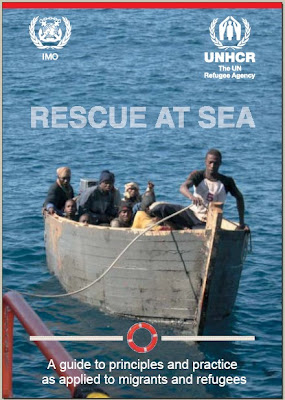 I wonder if the UN received permission from these 'migrants' to use this photo in their publication.

Winter solstice - The winter solstice occurs at or about 0022 GMT on Friday, December 22. For those of you who do not live in Greenwich – too bad! – it is going to happen regardless. Of course, if you reside in the southern hemisphere, this is actually the summer solstice, you lucky devils. For scientific information about this event, go to Wolfram. For cultural information, go to Candle Grove. - Dennis Bryant

Here is a story from Fairplay Daily News from 22 August 2005 which I believe is still relevant and still not generally reported:

French coast guard too expensive - THE creation of a US-style coast guard service in France would be too expensive, according to a report released last week at the French Senate. “Creating Coast Guards similar to those in operation in the US is beyond our economic means. We must therefore maintain our current coast surveillance system based on a co-operation between the prefectures, the navy, the ministry of transport and customs, with some improvements” the report says. The European Commission is currently working on a feasibility study to create coast guard services at a European level. But, as far as France is concerned, the report advocates a strengthening of the role for the ministry of transport at the expense of the Navy, which should allocate its budgets to more military missions. Lately, the Navy has doubled its deep-sea tug chartering budget with the delivery of two new surveillance tugs, Abeille Bourbon (at Brest) and Abeille Liberte (at Cherbourg) which will work in addition the ageing Abeille Flandre and Abeille Languedoc which have been re-deployed in the Mediterranean and in the Atlantic respectively. - Fairplay