This Week's Photos:
Here is an example of some out of the box thinking. A sea-based rocket launching platform. It takes less energy to launch a satellite into space at the Equator because you can take the most advantage of the Earth's rotation. As you can see from the map below, there are some countries where it could be possible to launch from the equator, but why limit yourself to those choices, when you can just build your own spaceport at sea and control all the factors without having to deal with a possible questionable Government. (The vessels are home-ported in Long Beach.) 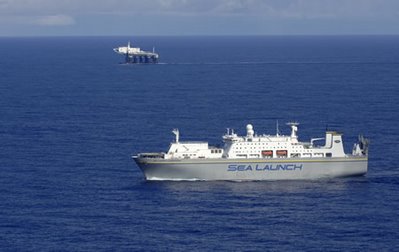 (SEA LAUNCH COMMANDER and the ODYSSEY at the Equator) 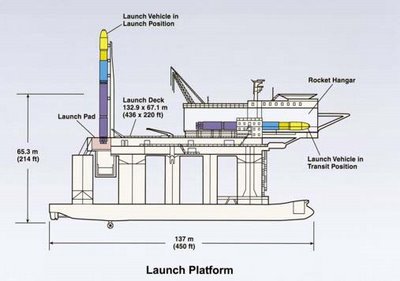 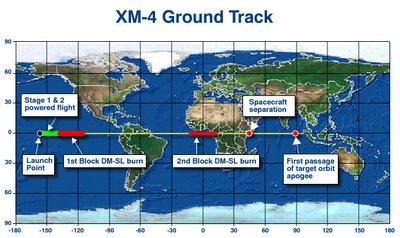 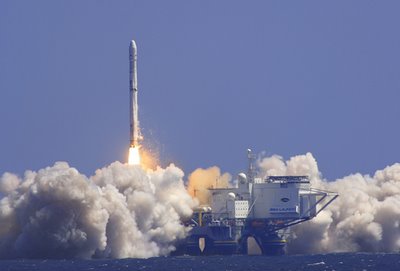 (Launch of XM Radio's 'XM-4' communications satellite on October 30, 2006)
More photos and a summary of this launch mission here at the Sea Launch Mission page.

More at the Sea Launch Homepage.


This Week's Items:
Eagle Speak covers the concerns of the anti-nuke crowd over the shipment of nuclear fuel by the ATLANTIC OSPREY which happens to be a single-hull vessel.

Sustainable Shipping has the must-read assessment that double-hull tankers ARE NOT less likely to have oil spills, and in some cases are even more likely. Ever hear of a mid-deck tanker? It is a design where the cargo tanks are separated top and bottom with a bulkhead. This way, if the bottom is holed, the pressure of the water pushing up is greater than the pressure of the oil pushing down through the hole, resulting in very little leaked oil. More here.

The Star, Canada covers the still-unfolding story of two solo "around the world" sailors who are in serious trouble in the southern ocean. Surely, not the last either before the face is over. (As a professional sailor, I consider this race the ultimate act of irresponsibility for a sailor.)

Forbes.com has the news of the Ontario Teachers Pension Plan (in Canada for those not familiar) agreeing to purchase Cargo Terminals in New York and in Canada. No comment so far from Senator Schumer on yet another foreign group purchasing port infrastructure. (The self-proclaimed libertarian-socialist-communist author of the LE REVUE GAUCHE Blog expects the right to start frothing at the mouth over the news of Canadian teachers purchasing port facilities in New York. The author, Eugene Plawiuk, claims to be an 'investigative researcher'. So I wonder how he overlooked the simple fact that it was Democrats who first went ballistic over the foreign purchase of US port facilities.)

Yahoo news carried the story that "The perception that there is a long list of unimplemented 9/11 recommendations [concerning port security] is simply not accurate." As the story explains, don't expect the Democrats to do much (anything) to improve port Security.

The Salt Lake Tribune has this week's other must-read by MARCEL RODRIGUEZ, Lt. USNR (Ret.) who writes about serving in the merchant marine during WWII.

PortWorld has the comment by Ton Dufresne, President of the Canadian International Longshore and Warehouse Union, who said that the proposal to have background checks on port workers' criminal records was based on an "urban myth" that there was organized crime within the ILWU.

The ILWU has a press release explaining that background checks of their workers in the US is not needed as there are no terrorists in their ranks. (What about criminals?)

The LA Times has the news of over 800,000 TEUs moving through the Port of Los Angeles in October, a record. No other US port has even managed to hit the 700 thousand mark, other than the Port of LA. (The story refers to 800 thousand containers, but later does clarify 'to the equivalent of 800,064 20-foot containers.' One 40 Footer equals 2 Twenties. So if every container handled was a 40 footer, that would be 400,000 actual containers handled.)

Cargo Law has finally obtained a full set of photos of the amazing 2002 grounding of the M/V ALVA STAR.

The Nor'wester notes Canada's discrimination against Canadian fishermen as foreign fishermen are not prosecuted for violating Canada's fishing laws.

Navy Newsstand has the story of the USS JUNEAU making a port call at the Maxie Naval Base in Zhanjiang, China.

Greenpeace is pissed off at Iceland for 'harpooning' a moratorium on high-seas bottom trawling, accussing it of acting instead to protect it's own interests. (As if any country would do that.)

Lloyds Agency has a summary of the salvage operation of the ROKIA DELMAS that is aground off France. Latest entry is from 9 November noting that it will take several weeks to remove containers from the vessel.
Venezuela Analysis covers CITGO's first delivery this season of home heating oil at a 40% discount for low income families in New York City. While I will not be filling up at a CITGO anytime soon, I highly encourage anyone eligible to take advantage of the offer of below-cost fuel. This way you can finally 'stick-it' to the oil man.

Sailor jumps from sinking boat to barge - In a story too strange to have been invented, the US Coast Guard issued a press release stating that a man was found on a barge under tow in the Atlantic Ocean off the coast of northern Florida. It appears that the man jumped from his sailboat to the barge after the two vessels collided at night. The sailboat sank. The crew of the tug was unaware of the collision. When they first noticed the man on the barge the next morning, they thought he was a stowaway and called the Coast Guard. Agents from the Coast Guard and the Customs and Border Patrol initially handcuffed the man, until they verified his identity and situation. (11/18/06). Holland + Knight

P&O Cruises re-flags more ships - LONDON - 22 November – P&O Cruises, the Carnival Corp subsidiary, is to transfer its 69,153-gt Oriana from the British to the Bermuda flag because weddings on board a British-registered cruise ship are not legally recognised. As the cruise liner will still fly the Red Ensign but under Bermuda registry, no UK seafarers will lose their jobs or any loss of conditions and pay. P&O has already re-flagged the Arcadia, Oceana and Artemis, all operating cruises out of Southampton, understandably for the same reason. The 115,000-gt newbuilding Ventura, despite the focus on its British pedigree, will also fly the Bermuda flag. This means a loss of 390,000gt from the British register. Andrew Linington of seafarer union Nautilus UK told Fairplay: “we have talked to the UK government but with no success.” Nautilus representatives were meeting P&O today over this issue. A P&O spokesman confirmed to Fairplay that the wedding issue was the only reason for transferring the ships. All five P&O ships will offer a Weddings at Sea package. A Department for Transport spokesman said the issue had been considered but the complexities of four different wedding processes made it too difficult. - Fairplay

It's libertarian not liberal. And you are right it was the Democrats. However the Republicans were quick to jump on board and my specific attack was on CNN's Lou Dobbs. He claims he is neither, republican or democrat, just a good old jingoist nativist protectionist.

Thanks for the feedback.

I have corrected the post. Apologies for the error.

Your welcome thanks for the link.