Please submit articles for inclusion in next week' edition using the following submit form at Blog Carnival. You are also welcome to email photos for inclusion in future editions. I know there's a boatload of interesting photos out there!

Think containers are big. Here is a Lighter Aboard Ship (LASH) Vessel. One of the great benefits of this type of vessel was the simple fact that it did not need access to a dock. The barges are lowered from the stern and tugs take them to the final customers. In places like Africa, the barge can be moored right to small dock or even a riverbank where it can be unloaded with the best means available.
There were a number of interests that did not like this idea both at home and abroad, like stevedore unions for one, and some legislation (I think in Japan) severely limited the viability of this type of transport. As you can see, some are still around, thanks to a simple fact that many things do not fit inside standard shipping containers. 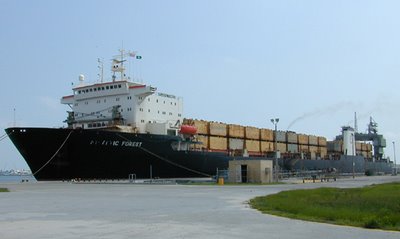 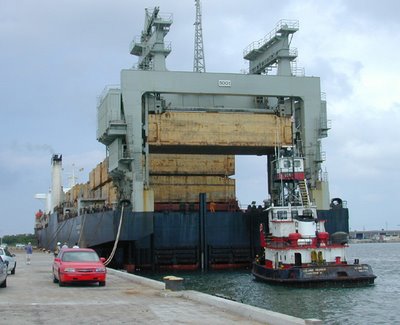 Marex Newsletter covers the death of a vessel pilot in Boston. The third pilot death in the US this year.
EagleSpeak has a Veteran's Day tribute, including the heroic story of US Merchant Marine Academy Graduate Edwin O'Hara last defensive acts on the merchant ship SS STEPHEN HOPKINS during WWII. He also points out that USMMA is the only Federal Academy authorized to carry a Battle Standard and the only Academy whose students are regularly ordered into war zones. (Federal law prevents students form other academies from being in warzones.)
The Ledger has the story of a WWII Merchant Mariner who was at Iwo Jima.
In yet another example of how Shipping Companies treat their crews like crap poorly, Helsingin Sanomat has coverage of the drunken escapades of Estonia's Tallink Board of Directors during a cruise on their newly acquired SILJA SYMPHONY.
In From the Cold has India's detention of the North Korean mystery vessel, the M/V OMRANI-II after it suffered mechanical problems off the Indian Coast. Turns out, the vessel was empty, adding to the mystery surrounding the vessel.
Sailors, Mariners & Warriors League covers the grounding of the tanker KRISTIN POLING in New York.
This French Blog has photos of the Panama-Flag ROKIA DELMAS hard aground in France. I have no update, but from the recent photos, it appears that the vessel is not going anywhere anytime soon.
The Monitor has a summary of the kidnapping (and release) of two western oil workers from the ship they were working on offshore.

Neptunus Lex has the story of the US Navy coming to the rescue of yet another Iranian dhow.
Lawhawk at A Blog For All notes that the US Navy has agreed to assist in the removal of the USS INTREPID from it's mud prison on Manhattan's upper West Side. The Aircraft Carrier/Museum was headed for shipyard renovation until the mud around the vessel turned out to be a bigger problem than expected.
Nothing to do with Arbroath covers the Australian Quarantine and Inspection Service's orders to a Containership to either capture of kill a rogue monkey seen onboard prior to docking. (I guess the Australians are not familiar with the adventures of 'Curious George')
Alaska Report has news of the Panama-Flagged GLOBAL HAWK whose cargo of logs has shifted in a storm. The vessel is now listing.
Divester has coverage of the project to sink the USNS GENERAL HOYT S. VANDENBERG in order to turn it into an artificial reef. They are trying to raise the remaining funds by selling the right to names the reef on ebay. Opening bid received $900,000. Auction here. Here is the homepage of the Artificial Reefs of the Keys, which is organizing this sinking. You can make a smaller donation here.
Fredrik and Crew on MAIKEN has great eyewitness coverage and photos of the birth of an island off Tonga. More at Matangi Tonga Online.
Thomas Paine's Corner covers Ship Breaking in Bangladesh. (Explore the rest of that blog at your own risk.)
Avant News explores 'what if' the Airbus A380 was retooled into a jet-powered, wide-bodied superboat.
Haight's Maritime Items has:

In memoriam – sinking of the EDMUND FITZGERALD - On this date in 1975, the S.S. EDMUND FITZGERALD sank in Lake Superior during a strong storm. All 29 crewmembers died. The tragedy resulted in several books, numerous Internet sites, and a hit song for Gordon Lightfoot – The Wreck of the Edmund Fitzgerald. (11/10/06).

Le Joola: French judges close in - PARIS 08 November – French judges investigating on the sinking of the Senegalese ferry Le Joola are hoping to be able to issue international arrest warrants soon against those responsible. More than 2,000 lives were lost in the tragedy, which occurred off Gambia in September 2002. "Even with the lack of co-operation of Senegal and Gambia, the French judges working on behalf of the victims' families have now collected sufficient documents and testimonies to say who bears some responsibility in the disaster," said Me Etienne Rosenthal, a lawyer representing the victims' families. A number of high profile political figures in Senegal at the time of the accident are likely to be prosecuted. Among them are the former armed forces minister, the chief of the army, the navy chief (Le Joola was managed by the navy), the former transport minister and the former prime minister. However, one observer commented that arresting these people could prove sensitive from a diplomatic point of view as the action is being taken by French judiciary, not Senegalese. Nevertheless, France – which lost 22 citizens in the sinking – has been left with little choice because Senegal closed all investigations into the accident simply on the grounds that the captain went down with his ship. Local families were poorly compensated. French judges have highlighted the incredible amount of negligence surrounding the loss of the ferry and say people who bear responsibility will be sued for severe negligence, involuntary homicide and failure to assist persons in danger. Lloyd's Register - Fairplay

The incident happened shortly after the Singapore-flagged, 74,065 dwt vessel left the Pentland Firth, near Orkney, en route to Houston, Texas, in heavy storms. Shetland coastguard received a call from the vessel at around 12.40pm and a rescue helicopter was rushed to the scene.

Both men however were already dead, while the other was airlifted to hospital, according to news reports. The men were believed to have been standing on the deck when a huge wave, more than 20 feet high, struck the tanker. It was loaded with 75,000 tonnes of crude oil.

The vessel, built this year, is owned by Singapore-based FR8 Shipmanagement. It was steered back to port at Scapa Flow and investigations are underway. The area had been experiencing severe weather conditions over the last year days. - Lloydslist

Rantburg points out that the US Congress is running out of time to pass legislation easing offshore oil drilling restrictions. (Because we all know that the next Congress won't do it.)
Finally, this is also the last moments for the US House and Senate to pass the "Belated Thank You to the Merchant Mariners of World War II Act of 2005" during their lame-duck session of Congress. This is not likely to happen as Senator Larry Craig (Chair of the Senate Veteran Affairs Committee) and Congressman Steve Buyer (Chair of the House Committee on Veterans' Affairs) have refused to let the bill (S1272 and HR 23) out of their respective committees for a vote. Why, because the estimated cost of $36 million the first year "is too expensive." And this from people who have no problem allocating over a billion dollars for two bridges to nowhere in Alaska (Yes, two bridges). Just one more reason why the Republicans lost this last election.

WASHINGTON, Nov. 1 /PRNewswire/ -- The Just Compensation Committee, a non- profit unincorporated committee of Veterans representing the interests of World War II Merchant Marine veterans, announced today that Congressman Buyer (R-IN) is withholding a full committee vote on H.R. 23 , a proposed bill that would compensate remaining World War II Merchant Marine veterans that were denied the G.I. Bill of Rights that the other military services received following the conclusion of World War II. H.R. 23 has been awaiting a full- committee vote for the past several months, but has been road blocked by Congressman Buyer for political purposes. Currently, H.R. 23 has 267 co- sponsors and is allocating $1,000 a month for remaining Merchant Marine veterans and their widows.
"The Merchant Mariners of World War II sacrificed their lives in order for troops, ammunition, gasoline, military equipment and supplies to reach the war front overseas, and to still prevent these remaining veterans from being compensated for their service in the name of politics by Chairman Buyers is devastating," said Ian Allison, co-chair of the Just Compensation Committee.

"It's not only wrong but also unethical to spend billions of dollars on the Iraq War and still refuse a committee vote for thousands of World War II veterans from an entire auxiliary service that have been trying for over 60 years to gain some compensation for the G.I. Bill of Rights they were denied. How you treat your veterans from yesteryears is a good indication on how you plan to treat veterans from today's wars." As of October 2006, H.R. 23 has collected 267 co-signers while the Senate companion bill S. 1272 has collected 41 co-signers. - Full Press Release

This is not surprising. Don't expect the Democrats to pass this one next year either.
Posted by Fred Fry at Monday, November 13, 2006

I want the detail information about Crew''s who killed in this accident .Please If you have any information please do mail me