This Weeks Photo:
This is a photo of the 106,000 Deadweight ton supertanker MOSCOW RIVER that is operated by the Novorossiysk / NOVOSHIP Shipping Company. 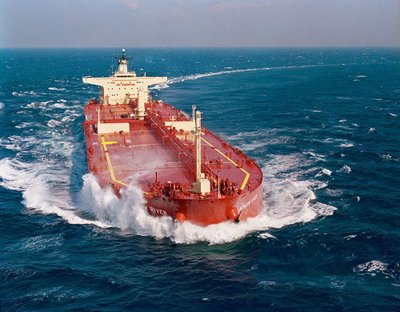 Details of the vessel here.

Eagle Speak has a welcome development in scanning shipping containers for nuclear materials.

Coming Anarchy has news of an oil pipeline from the Black Sea coast of Bulgaria to Greece in an effort to bypass the Bosporus Straits of Turkey.

The Daily News Canada has the announcement of required background checks for Canadian port works. As is typical, the unions are up in arms that their members are being targeted, like "former crane operator Paul Matthew Arthur (who) received 12 years in prison for helping to smuggle almost $100 million of drugs through the port of Halifax several years ago", for example.

Sailors, Mariners & Warriors League has coverage of the vessel WESTWOOD POMONA, which suffered damage from a rogue wave.

NoisyRoom.net has news of France inspecting the North Korean Flag vessel AM NOK GANG in off Mayotte in the Indian Ocean.

One News New Zealand has coverage of the French seizure of 4 tons of cocaine found during an at-sea inspection of a Panama Flag cargo ship.

Jennifer Marohasy notes the start of Japan's whaling season. 850 minke whales are to be targeted this time around. For science, of course. (Those scientists must be pretty lousy to need so many. I was only allowed one fetal pig in my science project in high school.)

The Torch notes the likely US request for Canada to assist in patrolling in support of the UN embargo against North Korea. Maybe they can spare 1 ship. Maybe.

Marex Newsletter has the story of CITGO's downfall, thanks to Venezuela's President. (Note: Keep in mind that Venezuela's crude oil is of a kind requiring specialized refining. Their US refineries are constructed specifically to handle Venezuela crude. Shipping the crude to China is possible but causes problems when they want to refine it. Then there is the fact that it takes longer to ship to China, so more tankers are needed than shipping to the US. Then again, nobody up here wants Venezuela crude, not even for free so they just might have to ship it to China.)

Cruise Bruise has news of the intentional dumping of a half million liters of used lube oil and sludge into pits dug into the ground onto the Pacific Island of Vanuatu. (Most interesting read.)

SeattlePI Blog asks "Will LNG liquefy American cities? And why the secrecy?"

Neo Commons covers the setback to the Cabrillo Port LNG project in California due to the demands that the offshore facility meet landside air quality standards.

Offshore Shipping Online has news of the European Parliament voted to increase protection of European waters and called on member states to clean up their waters by 2017.

Helsingin Sanomat has a follow-up to the Tallink Directors drunken escapades onboard their newly-acquired SILJA SYMPHONY. The directors will be making an 'Apology Tour'. (The Estonian Directors are being persecuted for what Finns and Swedes normally do daily in Tallinn, Estonia every day. They consider it their Riviera. It does not excuse the act, but does give it a little context. So the next time your in Tallinn and wonder about all the drunk Estonians, just remember, they are Finns and Swedes.)

Malta Media has news of the death of the Chief Officer of the RoRo JOLLY BLU when he was run over by a truck trailer onboard.

Cruise Ship Law Blog has coverage of 2 passengers stranded in Kusadasi, Turkey after being forced to disembark from the GRAND PRINCESS cruise vessel.

Divester has the story of Truk Lagoon's WWII Japanese wrecks are increasingly becoming an environmental disaster.

Santa's Sleigh? No, that's just the EMMA MAERSK arriving in the UK, to the horror of members of the Green Party who can't help themselves from guessing wildly about the amount of environmental damage that the vessel leaves in it's wake. Story at the BBC.

The Age, Australia, seems to think that Santa's sleigh is named the CSCL NEW YORK. (It also mentions that the EMMA MAERSK is too big for any Australian Port.)

Containership-Info has high resolution photos of the EMMA MAERSK.

Murdoc Online has an image from space of a US Aircraft Carrier, landlocked in China.

Beyond Katrina has news of environmentalists suing to end bluefin tuna fishing in the Gulf of Mexico.

Petrobras Oil of Brazil has an interactive diagram of a fixed offshore oil platform.

In the Spirit of Thanksgiving, go to Cape Cod Today and read a summary of the voyage of the MAYFLOWER that brought the pilgrims to the new world.

Right to maintenance and cure lost through concealment - The US Court of Appeals for the Fifth Circuit ruled that a mariner forfeits his right to recover maintenance and cure for personal injury when he knowingly or fraudulently conceals his condition from the vessel owner at the time of employment. In the instant case, plaintiff seaman applied to employment with defendant shipowner. As part of the hiring process, the shipowner required new employees to complete a medical history questionnaire. On the questionnaire, plaintiff indicated that he had never had back, neck, or spine trouble or received chiropractic treatment. In fact, plaintiff had injured his back several times, most recently in a work-related incident six months earlier, for which he sought treatment from both an orthopedist and a chiropractor and filed a workers’ compensation claim. Evidence showed that defendant would not have hired plaintiff if it knew of his medical history. Plaintiff suffered back injury one week after being hired as a deckhand. He then brought suit seeking maintenance and cure, as well as damages under the Jones Act for personal injury. The court held that recovery for maintenance and cure was barred where plaintiff actively concealed material facts relating to his physical condition and medical history from his prospective employer. Jauch v. Nautical Services, Inc., No. 05-30466 (5th Cir., November 9, 2006).

UK – maritime forger removed from country - The UK Maritime and Coastguard Agency (MCA) issued a press notice stating that a foreign national residing temporarily in the UK has been removed from the country after twice attempting to gain approval to study at a UK marine college. Both applications included forged documents purporting to show that the applicant had maritime experience qualifying him for such training. (11/9/06).

Grimaldi blasts Finnlines hypocrites - Emanuele Grimaldi, managing director of Italian ro-ro operator Grimaldi Naples, has questioned the intentions of the two members of the Finnlines board seeking to block the proposed takeover. “The two board members who advised colleagues not to recommend the offer to other shareholders because the price was too low are the same hypocrites who earlier sold us their shares at the same price,” he said. He described the offer as “fair and reasonable” but the outcome would only become clear on 1 December when the offer is closed. “Those who wish to stay as shareholders, thereby showing great faith in our capacity to manage Finnlines, are certainly welcome,” Grimaldi added, blaming the disruption to the complexities of Finnish commercial law. “We are in transition between the national and EU ruling for this kind of operation; this is probably the first case in this sector to go under a transitional law.” Grimaldi pointed to Finnlines’ presence in St Petersburg, a strategic port for Moscow, where the growth of car and truck traffic is expected to be rapid.Lloyd's Register - Fairplay

Finally, Senator DeMint has introduced legislation to phrohibit the issuance of Transportation Worker Identity Cards (TWIC) to 'serious Felons'. As he mentions, this was the original plan, but some unnamed Congressman/men stripped the provision out of the bill before both Houses approved the version sent to the President. Here is the Senator's Press release:

“We can spend all the money in the world screening cargo but if we don’t screen the people working at our ports, we can’t expect to prevent a terrorist attack,” said Senator DeMint. “A serious felon is a prime target for those trying to smuggle a nuclear device or chemical weapon into our country. Trusting convicted murderers and weapons smugglers with secure access to our ports allows the fox to guard the henhouse and this legislation will put a stop to it.”

In language nearly identical to prohibitions at American airports, The Secure Port Workforce Act would deny access to secure areas in our ports to serious felons who have been convicted of: Espionage; Sedition; Treason; Terrorism; Crimes involving transportation security; Improper transport of a hazardous material; Unlawful use of an explosive device; Murder; Violations of the RICO Act where one of the above crimes is a predicate act; Conspiracy to commit any of these crimes.

It would also bar convicted felons who have been convicted in the last seven years (or incarcerated in the last five years) of: Assault with intent to murder; Kidnapping or hostage taking; Rape or aggravated sexual abuse; Unlawful use of a firearm; Extortion; Fraud; Bribery; Smuggling; Immigration violations; Racketeering; Robbery; Drug dealing; Arson; Conspiracy to commit any of these crimes.

This language passed the Senate unanimously as part of The SAFE Ports Act. Unfortunately, the language was quietly gutted in conference leaving only a prohibition on convicted traitors, spies and terrorists from having access to the secure areas of our ports. This population of criminals is so small it doesn’t begin to address the security problems at our ports. No legislator took credit for this change in conference, however the International Longshore & Warehouse Union (ILWU) announced it lobbied Congress to remove the DeMint language:

ILWU’s The Dispatcher, October 2006: “Congress will return after the election in a ‘lame duck’ session and work through part of November and December. We have heard rumors that Senator DeMint (R-SC) is particularly angry with the ILWU’s successful lobbying effort to strip his anti-labor provision. He may attempt to amend another piece of legislation, so the union will stay on guard to protect its members’ interests.”

“The Secure Port Workforce Act will be the first test of the new calls for bipartisanship on critical issues facing our nation,” said Senator DeMint. “Leaders of both parties are on record fully supporting this measure and it deserves immediate passage. The safety and security of our nation’s ports is far too important to push off to another Congress.”

Law enforcement officials recently underscored the threat our ports face when traditional crime, particularly organized crime, works with terrorists. Only weeks ago, the FBI apprehended a member of the Russian mafia attempting to sell missiles to an FBI agent he thought was acting as a middleman for terrorists. Joseph Billy Jr., the FBI’s top counterterrorism official, commented that the FBI is “continuing to look for a nexus,” between organized crime and terrorists and that they “are looking at this very aggressively.”

Joseph King, a former Customs Service agent and now a professor at the John Jay College of Criminal Justice, outlined the concerns of serious felons looking the other way when suspected cargo enters U.S. ports. “It’s an invitation to smuggling of all kinds,” he said. “Instead of bringing in 50 kilograms of heroin, what would stop them from bringing in five kilograms of plutonium?” A criminal in one of our ports may think he is just helping smuggle in drugs, but inadvertently be helping smuggle a weapon of mass destruction into the United States.

Senator DeMint is a member of the Senate Committee on Commerce, Science, and Transportation which has jurisdiction over the program that regulates who can access secure areas in ports.

Don't hold your breath that this will be passed any time soon.

Thanks for the link!