Please submit articles for inclusion in next week' edition using the following submit form at Blog Carnival. You are also welcome to email photos for inclusion in future editions. I know there's a boatload of interesting photos out there!
This Weeks Photos:
The Swedish-Flag RORO FINNBIRCH was one of a number of vessels to go to the bottom around the world this week. This sinking took the lives of two seamen, one from Sweden and the other from the Philippines. This sinking appears to be weather-related. Accidents do happen and when they happen at sea people get hurt and die. 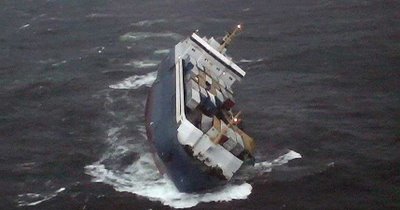 Last moments of the FINNBIRCH 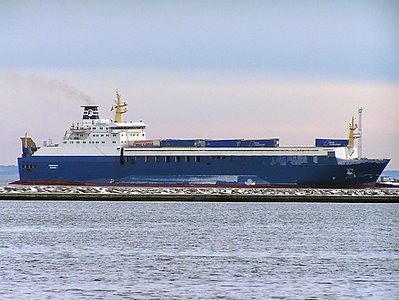 Wikipedia has a summary of the life of the RORO vessel FINNBIRCH which sank last week in a storm.
EagleSpeak has coverage of the dramatic decline in pirate attacks, except in Bangladesh. Also covered: "U.S. Navy captured Somali pirates get jail time instead of death."
Think sailors are rough. DieselDuck at The Monitor provides a shocking example of how rough it can be on a fishing vessel:

As the subject of a bet on whether sharks would attack him, Paulo Romero Cedeno was stripped naked, washed in fish blood and thrown into the ocean. There in the dark water, in the black of night, the young man heard the crew of the fishing vessel laughing at him. Then the captain snapped on a light and, after a few moments, dragged him aboard. He was later beaten by crew members who'd lost money betting he would die. - The Monitor

Go read the whole thing. (I would have bet that he would have lived but I would not end up on a ship that treats it's crew like bait.)
The BBC has news of the International Community delivering a letter of protest to Iceland over its resumption of commercial whaling. (Which will take nowhere near the number of whales that Japan takes for 'scientific' purposes like the 35 whales recently caught by Japan.)
Taipei Times covers the Governments pressure on their Coast Guard to stand up to Japan.
The Seattle Times has the story of the coming end of fish as food due to overfishing within the next 50 years.
A Lady's Ruminations covers the stowaway incident in Port Elizabeth, New Jersey, resulting in one dead from jumping overboard to avoid capture. (That he managed as his body has yet to be found.)
Sailors, Mariners & Warriors League has news of the hijacking of the UAE-Flagged M/V FISHANA off the coast of Somalia.
The Vancouver Sun covers the suspension of two former crewmembers of the ferry QUEEN OF THE NORTH after they refused to be interviewed about the vessel's sinking.
Chaotic Synaptic Activity has a Sea Story involving conservation of fresh water aboard.
Marine Log has news and images of the approval of a new type of CNG (Compressed Natural Gas) Carrier that stores the gas inside huge coils of small diameter steel pipe. Interesting concept. It's call the Sea NG Design.
EcoGeek has coverage of the shark's fin design Generating electricity from wave power.
Not bad for a Cubicle explains the problems of calculating the insurance risk in relation to rogue waves.
The Stupid Shall Be Punished remembers the Soviet sub running aground while spying in Swedish waters 25 years ago.
Neptunus Lex discusses the naming of vessels, namely aircraft carriers. Seems that Congress is not too keen on naming the new series of carriers the AMERICA class instead suggesting that they be named after President Ford. (America's first carrier was named the AMERICA.)
Do you know what was the worst maritime disaster in history? One might be the sinking of the German passenger ship WILHELM GUSTLOFF during WWII. The vessel's website calls it the "the greatest unknown single disaster in modern history" with between 7 and 10 thousand lives lost. (TITANIC has about 1500 victims.)

In the Merchant Navy has a list of different types of fog.

Indefinitely moored vessel not subject of admiralty jurisdiction - In an unpublished opinion, the US Court of Appeals for the Fifth Circuit ruled that an indefinitely moored gaming vessel is not a vessel for purposes of general maritime law and not subject to the admiralty jurisdiction of federal courts. In the instant case, the gaming vessel was afloat, but had not moved since arriving at its Lakes Charles mooring in 2001. The owners had no intention of moving the vessel. Plaintiff alleged personal injury from a slip-and-fall on carpeting outside the elevator. The court held that there was no jurisdiction to hear the case in admiralty. De La Rosa v. St. Charles Gaming Company, Inc., No. 05-41563 (5th Cir., October 31, 2006).

‘Unrealistic’ crew demands lead to stress and fatigue - CASUAL labour arrangements for seafarers and unrealistic demands for fast port turnrounds combine to subject a majority of the world’s seafarers to high levels of stress and fatigue, the Nautical Institute president has complained.

Speaking at a joint meeting of the Solent Branch of the NI and the Royal Institute of Navigation, serving shipmaster Captain Nicholas Cooper said that ruthless cost-cutting, commercial pressure and a tenfold increase in legislation and administration have eroded the possibility of rest and recreation and greatly increased the pressure on seafarers. The Nautical Institute president also suggested that the stress levels and fatigue are also added to by unsympathetic shore authorities, such as customs, immigration and port state inspectors in many parts of the world. These officials he accused of being “arrogant, over-zealous and aggressive”, treating those aboard ships “with suspicion and even contempt.” In such circumstances, he said, it is easy to see why morale aboard so many ships is “at rock bottom”.

Masters in particular, in so many companies, said Captain Cooper, feel that despite all the legislation apparently deferring to the master’s authority, they work under constant fear of dismissal if they are late on schedule, because of fog or heavy weather, or they record hours of rest violations which could put them under the scrutiny of port state control. The majority of masters, he points out, can be put in an impossible situation, being told by owners to manage their time more efficiently, if they wish to go to anchor to catch up on rest. The owners, who have instructed the master to comply with STCW procedures are “off the hook” and can blame the master for any subsequent problems. The NI president accuses owners, operators, charterers, managers and terminals of putting unrealistic pressures on ships. He also foresees little improvement in the seafarer’s lot over fatigue and stress problems as long as casual labour arrangements prevail in so much of the world’s shipping. - (Michael Grey)

Germans show short-sea frustration - HAMBURG 02 November – German port and terminal managers are frustrated at how slowly shippers and shipping lines are committing to the EU's ‘motorways of the sea’ programme. Speaking at the annual press conference of the Association of German port companies in Hamburg, Heinrich Ahlers, managing director of short-sea terminal operator Rhenus Midgard, said the company has not yet received any additional business from the EU initiative. Ulrich Bauermeister, head of port development in Rostock, echoed this view. “Traditional short-sea services, for example between the continent and the UK, have exhibited fantastic growth rates. But we have not witnessed any meaningful action on motorways of the sea projects towards Spain or the Mediterranean, as envisaged by the programme,” he explained. Ahlers highlighted two major obstacles. First of all, exporters of white goods and similar consumer products are very reluctant to shift from road to sea, he said, because they regard ship transit times as insufficient compared with land transport. Secondly, there is a lack of fast modern ro/ro vessels suited for the motorways of the sea. These tend to be rather high-spec and expensive, Ahlers said. - Fairplay

Sponsorship:
Send me an email (address in the sidebar) if you would like to sponsor an edition of Maritime Monday. I accept money and gear.
Posted by Fred Fry at Monday, November 06, 2006

Hey, nautical story lovers: How about considering doanting to our wounded troops for the Valour-IT program. It provides laptops to the wounded, with voice recognition software.

More details at my blog here

The Navy Team needs your donation and help.

See also the auction items up for bid here. Don't blow your chance to own a signed draft of the next Tom Clancy style writer, a navy Captain about to retire...it will be priceless and he is donating the proceeds to this project.

Thanks for your consideration and please, pass the word. Our troops don't need Kerry, they need us and a few bucks to get back into life...

Thanks for the comments. I just sent a couple bucks their way.