Welcome to this 27th edition of Maritime Monday.

Note: The next edition of Maritime Monday will be published on 9 October after my return from vacation.

This Weeks Photo:
Since I am going away for a while, I figured that I might as well leave a little homework for those whose knowledge of ships and terminology. So feel free to go off to the Federation of American Scientists and read the "Boats for Beginners." Just remember that those large things are ships, not boats. 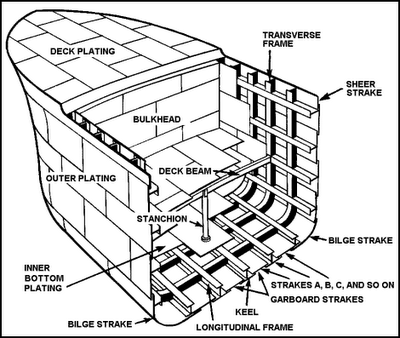 BBC News has news of deaths in the Suez Canal as the result of a dredge sinking.

Brown Hound has news of the death of former Coast Guard Commandant, Admiral Kime.
EagleSpeak has the latest on the US Port Security Bill.

The Stupid Shall Be Punished wonders if the Russians really admitted that they have tactical nukes deployed on their attack subs, in effect admitting a violation of a treaty with the US.

RMC's Navalcadetis minorae has an excellent explanation of why the Canadian Navy is pressing into it's far north. (In short, everyone else is already there.)

Hello Estonia has news of the discovery and removal of 47 WWII era Soviet anti-ship mines off the Estonian Coast.
Corey Pien at Slate wonders "Why is Washington exaggerating the pirate threat?" with an editorial titled "Hijacking the Pirate Menace". Cleary, nobody has ever bothered to tell Mr. Pien that pirates kill merchant seaman, and fishermen, and....

The Scotsman has further news on the seizure of the ship GREGORIO 1 (Some news report that the vessel is called the GRIGORIO 1 but a photo on Debka of the vessel provides the correct name.) by Cyprus suspected of weapons smuggling. Turns out that cargo manifested as "weather observation equipment" was actually air defense systems; 18 trucks and three command systems. Syria has demanded the release of the cargo, claiming it as theirs. Back in 2002 US and Spanish forces boarded the cargo ship SO SAN and discovered 15 unmanifested/declared Scud missiles, which the Government of Yemen later claimed as theirs. See the Christian Science Monitor for more details on that discovery.

Some details of the GREGORIO 1: (From the Equasis site)
Sailors, Mariners & Warriors League has news of an upcoming extremely foolish venture. Princess Cruises is planning to send the GRAND PRINCESS on a six-day cruise to Antarctica. There are lots of reasons why this is a bad idea.

Regime Change Iran has news that video footage released by Iran of a recent missile test is actually footage of a Chinese missile test.

Korea Looking Outward has news of the Chinese building a port at Najin/Rajin in North Korea. The payoff, exclusive access for Chinese-flag vessels, shutting out Russian ships. (For whatever that's worth.) Port details from the UN here.

Global Security.Org has the news of the USS RAVEN (mine hunter) saving the life of a crewman of an Iranian fishing dhow while on patrol in the Persian Gulf.
Logistics Management has news of the Port of New York and New Jersey handling ten percent more cargo than over the same period in 2005 for a new record.
Navy Newsstand has news of the USS STEPHEN W. GROVES interdicting over 8 tons of cocaine in three captures in less than two weeks while on patrol off the US West Coast.
Neptunus Lex has coverage of the Naval Academy breathalyzing returning midshipmen in an attempt to curtail their drinking off 'campus'. (Brings back fond memories of being charged with 'Providing alcohol to minors' 'Drinking as a minor' 'Bringing disrespect upon the Regiment of Midshipmen'. Lets just say it's a long story.)
Cdr. Salamander has more on the same subject and advises against going to the Naval Academy to obtain a commission in the Navy and instead go ROTC or OCS.
Marex Newsletter has news of Wärtsilä's newest 14 cylinder engine, the most powerful in the world.

The Daily Mail, UK has the story behind this composite photo, by Alisdair MacDonald, of one hour of traffic in the Thames. 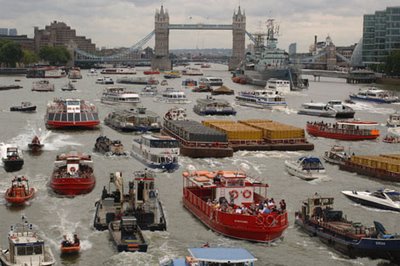 The Gowanus Lounge has a tip that the massive graving dock at Red Hook in Brooklyn (Todd Shipyard) is being filled in, by Ikea, so that they can pave it over to make a parking lot.
Design Asides has a summary and graphics of the proposed restoration facilities (ship in a bottle) for the CUTTY SARK in Greenwich, England.

Imagine There's an Image has photos of the Lightship CHESAPEAKE. A summary about lightships can be found at Wikipedia.

Clean Up The World has information on Clean Up The Mediterranean Campaign which launched on 15 September in Athens, Greece.

Solidarity covers the as yet unsuccessful attempt to honor Sydney's longshoremen.

OSHA has a summary of shipyard hazards.

From Haight's Maritime Items: (Where Dennis L. Bryant does a maritime roundup every day!)

Maritime heroes of 9-11 - The Maritime Administration (MARAD) posted a video entitled Maritime Heroes of 9-11. (Note: the link is direct to the video.) The video chronicles the response effort mounted by the maritime community in the Port of New York and New Jersey immediately after the terrorist attacks on the World Trade Center. (9/11/06). - Dennis L. Bryant

UK – master fined for Colregs violation - The UK Maritime and Coastguard Agency (MCA) issued a press notice stating that the master of a freighter was fined £500 and ordered to pay costs of £1,000 for violating the collision regulations by navigating his vessel in the English Inshore Traffic Zone while on passage from Littlehampton to Dunkerque, contravening Rule 10(d). The master initially claimed that he had received permission from Dover Coastguard to utilize the inshore traffic zone, which is reserved for small vessels that can’t safely travel further offshore. (9/12/06). - Dennis L. Bryant

Lastly, even though it has nothing to do with Maritime, be sure to check out this post at the Ice Blog, the Journal of a Polar Bear in Iraq.
Previous Editions: