So the Pope has upset a couple of Muslims and (just to prove that he is right,) they are out rioting around the world. Perhaps the Pope should have gone a little further and claim that the Koran is offensive to Christians because it "denies the story of the crucifixion of Jesus." In other words, the Koran teaches Muslims that Christians believe in a lie. Shouldn't Christians take offense to that?
For those of you who did not take advantage of CAIR's offer for a free Koran, you can read it at this online version. (Page 154, comment number 171 in the book.) No need to read the whole thing, skim through to the sections in red.

4: 155
And so, [We punished them*] for the break­ing of their pledge, and their refusal to acknowledge God's messages, and their slaying of prophets against all right, and their boast, "Our hearts are already full of knowledge"- nay, but God has sealed their hearts in result of their denial of the truth, and [now] they believe in but few things - ;** (4: 156) and for their refusal to acknowledge the truth, and the awesome calumny which they utter against Mary,*** (4: 157) and their boast, "Behold, we have slain the Christ Jesus, son of Mary, [who claimed to be] an apostle of God!" However, they did not slay him, and neither did they crucify him, but it only seemed to them [as if it had been] so;**** and, verily, those who hold conflict­ing views thereon are indeed confused, having no [real] knowledge thereof, and following mere con­jecture. For, of a certainty, they did not slay him: (4: 158) nay, God exalted him unto Himself***** - and God is indeed almighty, wise. (4: 159) Yet there is not one of the followers of earlier revelation who does not, at the moment of his death, grasp the truth about Jesus;****** and on the Day of Resurrection he [himself] shall bear witness to the truth against them.

Footnotes and commentary:
*The statement relating to their punishment - clearly implied here - is made explicit in verse.
**See 2: 88 and the corresponding notes.
***The calumny referred to is the popular Jewish assertion that Jesus was an illegitimate child.
****Thus, the Qur’an categorically denies the story of the crucifixion of Jesus. There exist, among Muslims, many fanciful legends telling us that at the last moment God substituted for Jesus a person closely resembling him (according to some accounts, that person was Judas), who was subsequently crucified in his place. However, none of these legends finds the slightest support in the Qur’an or in authentic Traditions, and the stories produced in this connection by the classical commentators must be summarily rejected. They represent no more than confused attempts at "harmonizing" the Qur’anic statement that Jesus was not crucified with the graphic description, in the Gospels, of his crucifixion. The story of the crucifixion as such has been succinctly explained in the Qur’anic phrase wa-lakin shubbiha lahum, which I render as "but it only appeared to them as if it had been so" - implying that in the course of time, long after the time of Jesus, a legend had somehow grown up (possibly under the then-powerful influence of Mithraistic beliefs) to the effect that he had died on the cross in order to atone for the "original sin" with which mankind is allegedly burdened; and this legend became so firmly established among the latter-day followers of Jesus that even his enemies, the Jews, began to believe it - albeit in a derogatory sense (for crucifixion was, in those times, a heinous form of death-penalty reserved for the lowest of criminals). This, to my mind, is the only satisfactory explanation of the phrase wa-lakin shubbiha lahum, the more so as the expression shubbiha li is idiomatically synonymous with khuyyila 1i, "[a thing] became a fancied image to me", i.e., "in my mind" - in other words, "[it] seemed to me" (see Qamus, art. khayala, as well as Lane II, 833, and IV, 1500).
*****Cf. 3: 55, where God says to Jesus, "Verily, I shall cause thee to die, and shall exalt thee unto Me." The verb rafa ahu (lit., "he raised him" or "elevated him") has always, whenever the act of raf’ ("elevating") of a human being is attributed to God, the meaning of "honouring" or "exalting". Nowhere in the Qur’an is there any warrant for the popular belief that God has "taken up" Jesus bodily, in his lifetime, into heaven. The expression "God exalted him unto Himself" in the above verse denotes the elevation of Jesus to the realm of God's special grace - a blessing in which all prophets partake, as is evident from 19: 57, where the verb rafa nahu ("We exalted him") is used with regard to the Prophet Idris. (See also Muhammad ‘Abduh in Manar III, 316 f., and VI, 20f.) The "nay" (bal) at the beginning of the sentence is meant to stress the contrast between the belief of the Jews that they had put Jesus to a shameful death on the cross and the fact of God's having "exalted him unto Himself".
******Lit., "who does not believe in him before his death". According to this verse, all believing Jews and Christians realize at the moment of their death that Jesus was truly a prophet of God - having been neither an impostor nor "the son of God" (Zamakhshari). - Extract of the Fourth Surah

Why do I not care what they think of my belief? How do we get them to feel the same way? Why are supposedly 'tough' Muslims so sensitive?

The Message of The Quran by Muhammad Asad

Get a load of the sign in the picture: 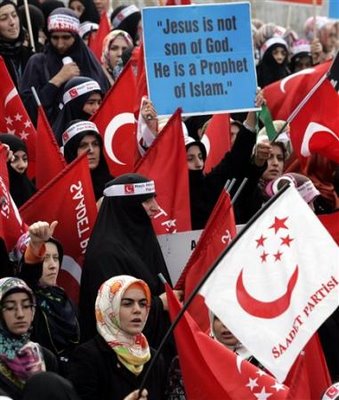 ("Jesus is not son of God. He is Prophet of Islam.").
Fine, if that is what she wants to believe but millions of people will disagree with her. Unfortunately, in her world, we cannot disagree with her proclamation. There will be no global outrage over the insult to Christianity that the sign in the photo is. However, look at the outrage over a couple cartoons of Mohammad, like this one: 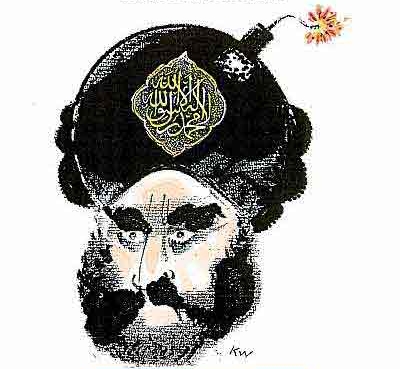 There is a basic problem here and that is one of Muslims ignoring the problems within their own religion. Those who care enough brush off the link between terrorists and Islam with the comment that Islam was Hijacked. I call bull on that lame excuse.
ISLAM WAS NOT HIJACKED
Posted by Fred Fry at Saturday, September 16, 2006

Doctrinal differences do matter, I'm afraid. Christianity is a transcendent religion, its Kingdom is not of this world. Leaving non-Christians alone (except for attempts at conversion) comes easily. Things like forced conversions have happened, but they are doctrinally hard to defend, rendering unto Caesar (who is nowadays a secular government committed to defending citizens' rights) is what Jesus would do. Other religions OTOH have definite ideas about running this world, using all necessary force. So you guys are exceptional, really, the Muslims are the norm.

It's pretty sad that you can't see the difference between a statement that Jesus is not the Son of God and a picture that depicts Muhammad as a terrorist. To spell it out, the first states a difference in creed, the second is a deliberate insult. You need to start recognising your own superiority complex and stop feeling you have the moral high ground. That is if you're interested in Truth rather than having the last word.

First, I prefer to have the last word.

Second, I was trying to point out that they deny the main belief of the Christian religion. Imagine the outrage if Christians denied mohammad? As far as I am concerned one of the biggest problems with the muslim world is due to the religion.