Welcome to this 26th edition of Maritime Monday.

This Weeks Photos:
Here are a couple of photos from my fourth and last visit to the U.S. Navy-Military Sealift Command (MSC)/MARAD fire training facility in Earle, NJ. This is in 2000 and was my second trip for basic firefighting (renewal). Other trips were basic and advance firefighting and damage control. 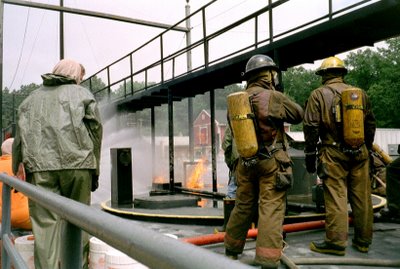 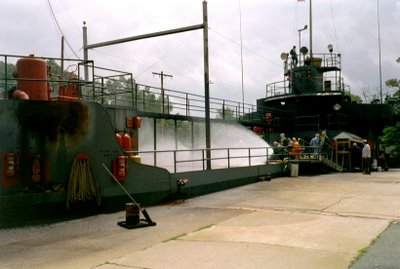 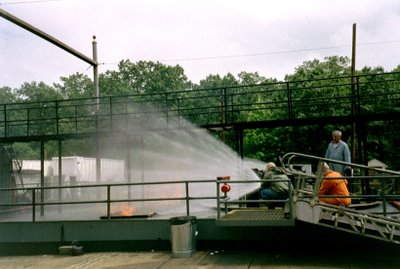 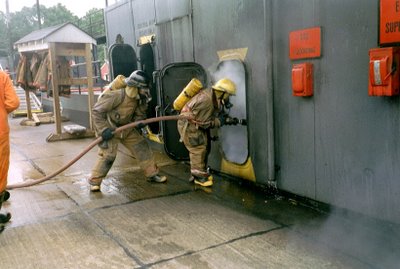 The Stupid Shall Be Punished (Sub Blog) has news of a fire onboard the Russian Submarine DANIIL MOSKOVSKY resulting in two deaths.

EagleSpeak has news that terrorists might be checking out Washington State's ferry system. In a related post, he covers port security 5 years after 9/11.

Hello Estonia has news of the Panama-Flag tanker PROBO KOALA causing concern in the Baltic. The tanker recently discharged toxic petroleum waste dumped in the Ivory Coast resulted in the deaths of 3 locals and injury of 1,500. Relief Web has more on the sad story.

The Intelligence Summit has news of Cyprus impounding a Panama-Flag cargo vessel suspected of carrying weapons bound for Syria.

Ms. Sizzle Says should have a tribute (not yet posted as of publishing) to Merchant Mariner John Corcoran (First Engineer) who was killed on 9/11. He was flying to the West Coast to catch a ship when his flight was hijacked as part of the attack.

Sailors, Mariners & Warriors League has news of a collision between the cargo ships DEALER and VINDO off Dover in the English Channel. As it so happens they were communicating with each other when the collision occurred.

Bellona Foundation has the news of the removal of the last submarine from Russia's Greminka base.

Ocraworldwide has news that "Dubai Ports World Plans Major North American Investment" in Vancouver, Canada. (I just wonder what Dubai Ports World will do once Congress adjourns with NONE of the Anti-DPW-Owning-Anything-in-the-US hysteria legislation being passed into law. Might they just keep their US operations?)
Nunatsiaq News has coverage of the 100th anniversary of the first European vessel to transit the Northwest Passage, accomplished by Norwegen Roald Amundsen.
Logistics Management has news of Shanghai setting a port record in August for number of containers they have handled in a month.
Navy Newsstand has the news of the closure of Naval Air Station Keflavik in Iceland.

Schlumberger has some reference material for the Offshore Oil Industry; The i-Handbook, an electronic version of the (Well Services) Field Data Handbook and The Oilfield Glossary.

UK's Timesonline has a story on the dangers of small-boat sailing in the English Channel.
When the Songbird Sings has satellites photos of the Guimaras oil spill.
Newswatch 50 has the news of the grounding of the Greek-Flag TORO in the St. Lawrence Seaway.

There is a new book out covering the USS SAMUEL B ROBERTS during it's duty in the Persian Gulf escorting (re-flagged) Kuwaiti tankers. It's called "No Higher Honor". For those who don't know/remember, the Roberts struck an Iranian mine. Read chapter 1 here which covers the moment the vessel struck the mine.

Google images of this and previous vessels with the name here. Read the amazing story of the heroism of US Navy Coxswain Roberts here.

Cdr. Salamander comments on having an aggressive (effective) maritime blockade.

UK – investigation of grounding on Goodwin Sands - The UK Marine Accident Investigation Branch (MAIB) issued the report of its investigation into the grounding of a freight vessel on Goodwin Sands on 12 February 2006. The primary cause of the grounding was that the master, who was alone on the bridge, fell asleep and missed a course change. Secondary causes included that the master was exhausted and drunk, that the lookout had been sent below, and that company audits had failed to detect that the ship had not complied with the company’s safety management plan. The bridge watch alarm had not been activated, primarily because the master was unaware that the ship had been fitted with the alarm. The master was later convicted of operating the ship while intoxicated and he was sentenced to seven months imprisonment. Report No. 24/2006 (9/1/06). .

BC Ferries lawsuits 'more likely' VANCOUVER 07 September – Lawsuits following the sinking of BC Ferries' Queen of the North are becoming increasingly more likely. Lawyers in a still-to-be-certified class action suit against the ferry corporation were successful yesterday in adding several crewmembers to the suit in addition to the crew members who were on the bridge at the time of the accident. The complainants, Alex and Maria Kotai, who lost their household belongings in the accident, were successful in adding the ship's captain, the fourth officer and a deckhand to the suit, claiming the accident was the result of "recklessness", which is a significantly greater charge than "negligence" and removes the cap on damages if they are successful. The Queen of the North struck Gil Island, British Columbia, in the middle of the night of 22 March and quickly sank. With the exception of two passengers, all on board survived the sinking. In addition to adding other crewmember to the class action, the lawsuit claims there was also a "temporary abandonment of duties". If successful the crewmembers named could be held liable for damages..

Fatal shooting on Phils ferryMANILA 08 September – The Sulpicio Lines passenger/cargo ferry Cagayan Princess was the scene of a murder today, with the killing of a former governor of Biliran province aboard the ship in Cebu port in the early hours of this morning. Danilo Parilla died in a nearby hospital after being shot in the back of his head by his assailant with a .45 calibre pistol. The gunman was also aboard the ferry, Sea Sentinel’s sources have ascertained, suggesting that ship security had failed in allowing the armed man aboard. Parilla was queuing to disembark from the Cagayan Princess after it docked at Pier 4 in Cebu port when he was shot, according to a police report. Terminal police immediately arrested the gunman. He is said already to have assaulted Parilla, at the Naval Pier in Biliran on 2 September, after the former governor accused him of involvement in a robbery. - Fairplay