Welcome to this Labor Day (US) edition of Maritime Monday.

This Weeks Photos:
How exactly do those huge container cranes arrive at the port? As cargo of course, but just how do you discharge them? It's not like they can lift themselves off the ship. You roll them off of course. The following photos are from delivery of cranes at Vancouver's Deltaport Terminal: 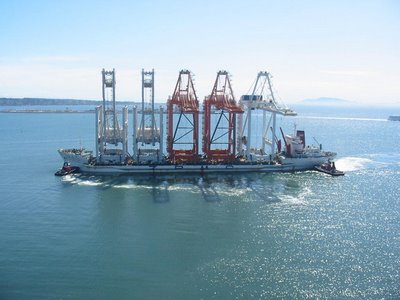 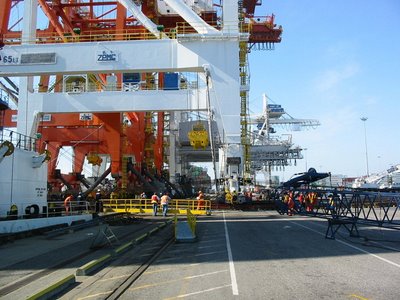 (Rolling a crane off the ship.)
View the whole series here. They are on the TSI Terminal Systems site, which is the operator of the Deltaport Terminal. The company's photo gallery is here.
This weeks items:

EagleSpeak has a photo and update on the Sea-based x-band radar platform.

Dockwise is/was the company transporting the SBX. Check their site for more pics and a video.
Russos has pictures from inside an abandoned Soviet Nuclear Submarine Base located in Balaklava, Ukraine. There is an English summary at the bottom of the page.
Sailors, Mariners & Warriors League has the news that the Port of Vancouver is suffering a slowdown as the local union is not able to provided the needed amount of Longshoremen.
EU Referendum has the story of "predatory EU third country fishing agreements" contributing to the mass migration from Africa to Europe. (Are they following their fish?)
Logistics Management has news that the Port of New Orleans has surpassed pre-Katrina tonnage levels, despite losing 25% of its terminal facilities. (5-year average.) Seems none of the news programs revisiting New Orleans bothered to mention that.
Armed-Guard.com has news of the recent award of a Russian Jubilee Medal to WWII Navy Armed Gunner Theodore McConley who was assigned to a merchant ship ferrying supplies to Russia.
The International Maritime Bureau has released a Google Maps mashup "Live Piracy Map" where piracy attacks will be uploaded within 24 hours of being reported.
Kuam News has coverage of an accident in Guam's shipyard, where two Civilian Mariners from the USNS SAN JOSE fell while painting, resulting in one death. (USNS SAN JOSE website here.)
Turks.US has coverage of Turkey's decision to ban the vessel OTAPAN from Turkish shipbreakers. Ship Photos has a picture of the vessel during it's 7 year stay in Amsterdam.
Foreign Policy Magizine has a photo essay on shipbreaking at Chittigong.

The Stupid Shall Be Punished (Sub Blog) has "The Legend of the Midnight EOOW."

Murdoc Online has the story of two WWII era Coast Guard Cutters still in service in Alaska, but perhaps not for much longer.

UK – lifeboat design study - The UK Maritime and Coastguard Agency (MCA) posted an 84-page study that it commissioned on the development of lifeboat design. The study confirmed that most of the serious accidents involving lifeboats occur because of problems with the on-load release hooks. It recommends that the safety and stability of all lifeboat on-load release hooks be demonstrated by means of a safety case regime, subject to independent review. MCA Research Project 555 (3/27/06).

Polish yard subsidy report still awaited
BRUSSELS 04 September – EU Competition commissioner Neelie Kroes is believed to be still waiting for the report from the Polish government justifying the substantial subsidies that have been awarded to shipyards in Gdansk, Gdynia and Szczecin over the past year. The government set a deadline of Thursday 31 August and a letter was apparently faxed over on Friday to confirm that the report would be provided today. If the EU judges the subsidies, amounting to over euro450M ($579M) for restructuring and nearly euro1.7Bn in export guarantees since Poland joined the EU, are illegal they might have to be returned. At issue here is one of Poland’s largest industries and the second largest shipbuilding industry in Europe. Without some level of support there could be serious implications for the future of the Polish yards. - Fairplay