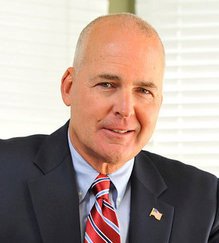 I just don't like my Congressman Gerry Connolly. He is a Liberal tool right behind Nancy Pelosi and Harry Reid. So I will be voting for the man seeking to replace him as my Congressman, Colonel Chris Perkins.

Here is a statement and video by Chris PErkins responding to comments made by Congressman Connolly, both touting his accomplishments in the district, which sounds lots like taking credit for securing Government funding for local projects in which he expects to be rewarded with being re-elected to his spot in Congress. Well, if that is how we should vote, then why not vote in the most corrupt people we can find. That will surely get the money flowing. Anyway, here is Chris Perkins statement:

I was forewarned that politics can be an ugly thing, but I was unprepared for the latest development in my congressional race to represent the 11th District of Virginia.

Incumbent Congressman Gerry Connolly has shocked many of his constituents by suggesting that career military veterans, like myself, are unqualified to serve in Congress – implying that their service to the nation at-large does not amount to sufficient “sweat equity” in the district they seek to serve in Congress.

While speaking to a local Chamber of Commerce and touting his own accomplishments during his 16 years in local politics, Mr. Connolly recently asked the audience: "Where has my opponent been?" Many in the room who were aware of my military career, including those wearing lapel stickers listing the Democratic Party ticket, were visibly taken aback and later distanced themselves from Mr. Connolly’s attack. Unrepentant, the congressman subsequently pressed his line of attack when he spoke to a local neighborhood civic association. Once again describing the work he did as a Fairfax County Supervisor in the building of schools and sidewalks for his community, Mr. Connolly again dismissed my more than 24 years of military experience, saying "I expect a candidate to have demonstrated some sweat equity!"

I am happy to answer the congressman's question. I was in Iraq trying to rescue American fighter pilots who had been shot down. I was hunting down war criminals in Bosnia, and I was evacuating U.S. Embassy personnel in Africa from armed mobs that would do them harm. I was at Arlington National Cemetery 17 times paying my last respects to brave men that I had the privilege and honor to serve with.

I am profoundly disappointed that Congressman Connolly believes career military men and women are unqualified to serve in Congress simply because they chose to serve and protect their country rather than enter local politics. Mr. Connolly’s statements are outrageous and demonstrate an out-of-touch career politician who thinks that only those who climb the ladder of local politics can graduate to higher office. By Mr. Connolly’s standard, many of our forefathers, including George Washington and Dwight Eisenhower, were unqualified to hold federal office. His statements are offensive to our service members and their families who have sacrificed so much for the country they love.

This country’s military veterans, professional intelligence officers and career first responders don’t just have sweat equity in their communities, they have blood equity in America. I believe the voters in Virginia's 11th District appreciate that.