The idea of taxing drivers based on how much they drive keeps coming back in the news. I covered this back in April, 2009 in the post 'A (GOVERNMENT CONTROLLED) TAXI METER FOR EVERY CAR IN AMERICA!'. Now the President is pushing this idea ahead and a way to get more tax from the population.

The Obama administration has floated a transportation authorization bill that would require the study and implementation of a plan to tax automobile drivers based on how many miles they drive.

The plan is a part of the administration's "Transportation Opportunities Act," - The Hill

That's great if you want to turn every car and truck in America into a taxi earning for the Government.

Here are some additional thoughts (in addition to my original post linked above) on this subject an how funding for the building of roads and bridges should be shared between the entire population.
First, a well-developed, well-maintained public transport infrastructure is in the benefit of every American. While some use the roads every day, everyone benefits from them, including those without a car. Need a policeman, Fireman or ambulance? They can't get to you if you without a road to get them there. While the need is rare, the need in those cases is urgent if not life-threatening. So just because you do not use it everyday, it does need to be maintained regardless of your use. And imagine trying to sell your house if there was no road to get to it. Use a bike or walk on the sidewalk. This is possible only as a result of road building. If you are going to tax drivers by the mile, why not also bikers and walkers?
So with this one issue in mind, it is not fair to burden only a segment of the population with funding of this infrastructure.
Then, as i wrote before, a mileage tax on cars is like putting a Government-controlled taxi meter in every vehicle in America. Outfitting every car and truck in America with tracking devices just to collect more tax has to be one of the dumbest ideas, ever. It would also be one of the most expensive projects, simply to put in place the tracking devices to levy and collect the tax information. And of course, it is not going to be the Government that pays, but car owners.

Worse, cars are already taxed in relation to how much they drive through a tax on gasoline. Sure, the rate is different for everyone, based on how much your car consumes as well as how much city/highway driving you do. However, everyone who drives pays and there is no need to make any changes to the cars (such as adding hundreds of dollars of GPS tracking and metering equipment) as the tax is collected at the pump.

One of the complaints of the current system is that people who choose hybrid cars save money because their cars use gasoline more efficiently than people who choose gas guzzlers. But there is an easy solution to this problem. Simply get rid of the $7,500 tax credit buyers of these cars receive and use that money for road building. The Administration would never do that because this would kill off the market for these cars, despite it solving the reduced gas tax revenue problem they create. And keep in mind that this is a problem the Government created in the first place for offering the tax credit.

Also, Democrats conveniently forget one reason for having a gasoline tax was to encourage drivers to conserve gasoline. Unfortunately for the rest of us, conserving gasoline means less tax money for Congress to waste. So our reward for being 'better citizens' is more taxes. In this case a proposed tax on every mile that you drive your car.
Also, lets not forget that the driving-force for a pay-by-mile tax is that the idea of raising gasoline taxes higher is universally unpopular. So as a fix, they decide to simply invent a new tax revenue stream. By all means raise the gas tax and incur the anger of the voting public. I can't see how this alternative is going to make people less angry. Really, they are going to violate the personal property of millions of American in installing tracking devices.

Ninety organizations are calling for an end to the $6 billion-dollar-a-year subsidy that encourages the production of ethanol biofuel from maize in the United States.
Ethanol makes up about 10 percent of the gasoline fueling cars in the United States, and almost all of it is made from maize.
"It’s renewable and domestic, home-grown," says Bob Dinneen, president of the Renewable Fuels Association, who adds that this home-grown source of energy is reducing the nation's dependence on foreign oil.
A 2007 U.S. law requires motor fuel to include renewable fuels. And - for blending in ethanol - gasoline makers get a tax credit that adds up to about $6 billion this year. - VOA News

In addition to direct savings from ditching the ethanol subsidy, all drivers would benefit immediately due to better gas mileage from running on an all-gas mixture.
Worse, the money already extracted from car owners (and even residents in general) in some places is obscene. Certain Metropolitan areas subsidize their mass transit project through overcharging tolls for vehicle drivers. I just drove back from New York and the sight of a sign noting that the Toll to cross the Verazanno Bridge was $13 was shocking even with the knowledge that this is the round trip price. Still that is $6.50 for each direction. It is well understood that a good portion of that toll is destine to subsidize the subways. How much? Try half!

Overbilling Car drivers to support the region's public transit system is only part of the redistribution that is going on in the NY City area. Take these additional taxes:

What You're Paying the MTA When You Don't Use It

All of this in order to prevent fare hikes and cuts in service. And yet, all of these acts mask the true costs of the service of public transport. It also puts off the need to fight waste and abuse when such a large slush fund is available to cover over the difference from actual revenue (bus and train fares) from actual expenses.

So drivers are already paying. Perhaps, money already extracted from drivers should be used on roads and the place to raise additional revenue should be in raising public transit fares. They are the ones who are not paying their 'fair share'. Their share is being partially paid off the backs of car owners.
Declaring that only some benefit from a well developed road infrastructure is simply false. Also, the excuse given for requiring all Americans to have health care in ObamaCare was that all Americans will eventually need medical care. the same applies to roads. Everybody needs them. So everybody should pay. 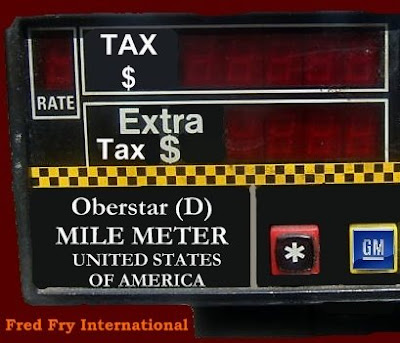 P.S.
One real screw in this tax meter plan of Congressman Oberstar is that we are already taxed on lots of roads that we drive on. Are they going to tax us for driving through Delaware on I-95 where the tolls per mile cost more than the cost of gasoline to drive through the state? Is this little machine going to tax us for driving on our own property and on local roads and 'unimproved' roadways? And if the answer is that they will not be taxing us on all roads, why should people who do not use them have these meters installed in their cars?
And how are they going to prevent massive fraud by users disabling these machines? That might be as simple as blocking the GPS signal. It would be impractical to integrate these machines to existing cars in a way that would defeat tampering. And if they ever did manage that feat, surely people will just start not registering vehicles because they can't afford the taxes that come with it. This would be a real possibility out west where the distances to be driven are large and the possibility of an encounter with law enforcement minimal. Then again, you register your car with your state, not the Federal government. So would they expect State Authorities to enforce Federal Tax-Meter regulations?
Surely there are many more issues out there that this Congressman is not interested in hearing about.
--------------------