I received my first 2012 presidential race fund-raising letter yesterday. It was from Mitt Romney. I got as far as 'Dear Fred' before I just went and tore the mailing up and tossed it in the trash. I did that because I have no interest in Mitt Romney being the Republican candidate for President. I think my biggest objection is 'RomneyCare'.
Of course I will vote for him if he wins the nomination, but he will have to get there without my help. That goes for Newt Gingrich as well. I think the photo below is a perfect example of how he is a political player. The lady he is sitting on the couch with rammed ObamaCare through Congress with zero regard for the concerns of anyone other than those pushing the radical overhaul of healthcare. If Newt becomes President, you can bet the Democrats will come calling demanding that they work together. This is a call they only make when they are out of power. Once in power, they kick their conservatives partners to the curb. This happens over and over because the Republicans are stupid, because they believe in the Democrats calls for bi-partisanship.
Let these guys have a VP or other supporting position. But by all means, lets find someone better for President! 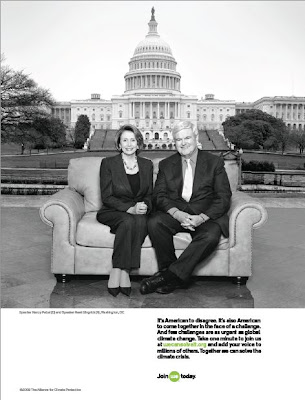