Over the weekend the response to the earthquake in Haiti picked up.

Much of the coverage has been centered on aid arriving by air. Basically that is because it only take a couple hours for aid flights to start arriving. However, it will be via sea that the bulk of the rescue/relief equipment and supplies will have to arrive given the quantity needed.

Much of the coverage has been of the US response. Here are some photos of the initial French Naval response.

Under the emergency aid decided by France on behalf of victims of the earthquake that struck Haiti January 12, armed forces have launched Operation Earthquake Haiti 2010.

The priorities are to route emergency resources to locate missing persons, medical aid, to secure relief, repatriation of our nationals and preparing the organization of humanitarian aid.

Some military and civilian chartered mobilized since January 13 to route emergency resources, personnel and cargo to Haiti and repatriate nationals.

The BATRAL Francis Garnier, left Fort de France yesterday, he joined the Guadeloupe in the night to complete her cargo of humanitarian cargo, and resumed his journey to Haiti. It carries about fifty military forces in the West Indies with engineering equipment (3 and 2 mini backhoe loaders) and vehicles (truck maintenance, 2 P4, a 4X4), a medical team and an ambulance, 700 tents and cargo for the benefit of the Red Cross. 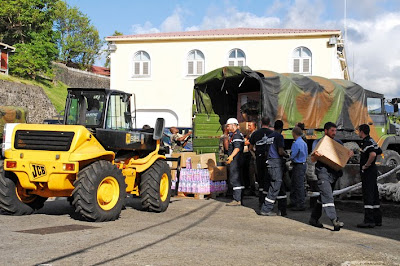 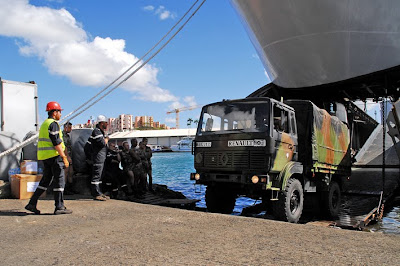 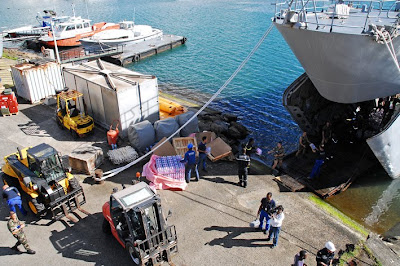 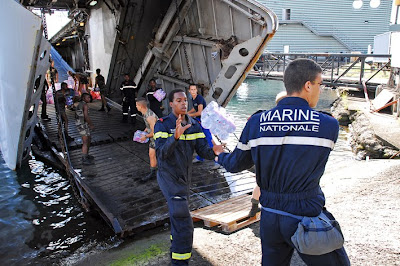 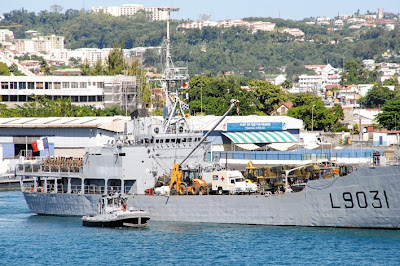 Seems they ran into trouble trying to offload pallets of water. Maybe they could not get a forklift to navigate the ramp. The logistics of water can be very tricky, given both it's importance to survival as well as the weight penalty for carrying it. Take this photo from another French Forces post on a flight of water to the quake area. 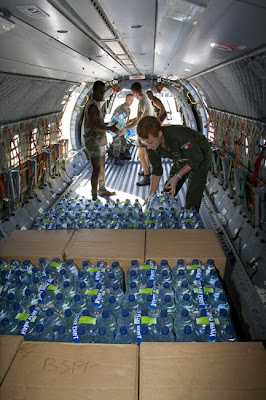