This Weeks Photos:
This weeks photos comes from the website of the United Arab Shipping Company:

UASC is the largest ocean carrier of dry cargo to the Middle East. UASC has assumed this position on merits as a carrier providing first class service to its customers, which has been maintained, despite ups and downs, in the world.

As a National line, UASC maintains an unswerving commitment to serve the Arabian Gulf. UASC offers a wide scope of services to the Arabian Gulf/Red Sea and Indian Sub-Continent regions thereby meeting the requirements of our customers. The company has maintained its market leadership by being the top carrier; both in terms of liner cargo carryings as well as the port coverage in this region. Uninterrupted and regular shipping services to the Arabian Gulf, maintained during the Gulf war, proved yet again the strong commitment of UASC to this important region. - Website 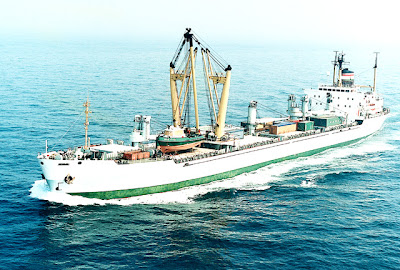 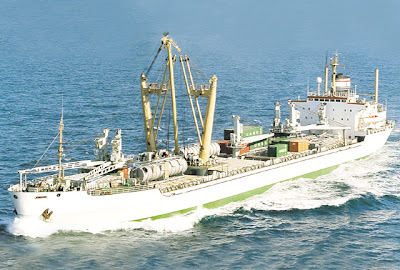 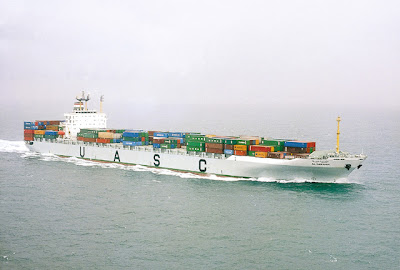 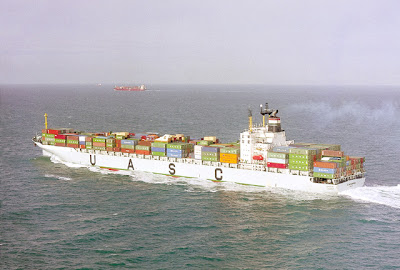 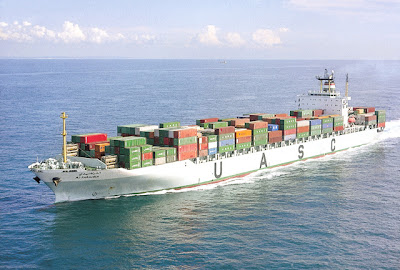 More photos can be found on their website here.

Also be sure to check out this week's edition of Eagle Speak's weekly series "Sunday Ship History: U.S. Navy in Africa"

Maritime Accident Casebook has "Putting The Arm On Class"

Surveyors from different IACS classes told me that their inspectors in those shipyards are under severe pressure to provide a certificate even when it is not conform to the state of the ship.

This concerns Asian shipyards. Maritime Accident Casebook is searching for information as it seems the lives of some inspectors are being threatened. Of course, if the ships are not safe, then many other lives and the environment might be threatened if nothing is done about it. (I would think that this would result in more detentions of newer vessels if the discrepancies were severe enough.)

Sea * Fever has an update on the undersea communications cable breaks with confirmation that an anchor was responsible for at least one break. Then again, any good conspiracy theorist would claim that the US, Israel, China, Iran, whoever would have used an anchor to make it look like a ship did it. So where is the ship with the missing anchor?

BitterEnd has "Just one word: "Plastics"". Ships are not allowed to dump plastic at sea, but there are other ways that plastic can find its way to sea from ashore.

Hello Estonia has "Estonia warned over facilities for ship-generated waste"

MarEx Newsletter has "Changes to UK Tonnage Tax Unwelcome for Some Owners" Another Government pushes to provide job security to flags of convenience.

Shipspotting poster Neill Rush posts a photo on the current state of the NEW FLAME wreck which has continued to sink in slow motion.

First was the case of the 64-year-old cutter Acushnet — the Coast Guard’s oldest ship and as such, bearer of the informal title “Queen of the Fleet” — which, in December, lost its screw, said Coast Guard spokesman Cmdr. Brendan McPherson. The ship’s propeller separated completely from its shaft, a significant problem made worse because the ship’s age means it has no off-the-shelf spare parts, forcing the Coast Guard to custom-build a new propeller and all the other equipment needed to fix the ship.

Molten Eagle wonders about the undersea cable breaks in "Cable Outage - Is it the Language of Back-Channel Diplomacy or Black Mail?"

Steeljaw Scribe has "Implementing the Maritime Strategy: Quantity vs Quality"

A DC Birding Blog has "Horseshoe Crab Moratorium in Question". Anyone who has ever picked up a dead horseshoe crab knows that there is not much to them, especially to use as bait. Seems like a complete waste to me.

Hellenic Shipping News has India's concern that ships send for scrap in India might also present a security threat in addition to the well known environmental threat they currently pose.

ShipTalk notes the differences in treatment between Airplane pilots and ship officers when accidents happen with one group often celebrated as heroes, and the other group not.

Go read the article for the reasons why.

The Maui News covers an upcoming shipyard period for the Hawaii Superferry ALAKAI.

Shifting Baselines has "More Tuna Than Ever? "Well, You're Not Very Old""

Maritime TV has posted the entire TV series of 'Victory at Sea'. Details of the series can be found at Wikipedia.

InfoMean Blog has "Stopping a Nuclear Bomb on a Hydrofoil"

Tugster has some assorted tug photos.

Kommersant (Russia): "Russia is seeking the extradition of Yury Nikitin, who is accused of embezzling $500 million from the Sovkomflot company, which controls the Russian merchant marine fleet"

YouTube poster/container crane operator jcat57126 has his series 'Up in The Crane' in 17 Parts. Check it out for the view from above.

EADT (UK) covers the deployment of armed police to the containership CAPROJO via helicopter to deal with a stowaway from Turkey that had gone berserk.

UberReview has "Anyone for an Environmentally Friendly Sea Burial?"

The Peconic Puffin has video of "The Stone Cold Craziest Winter Windsurfing Clip Ever". Looks like a good way to die.

The Horse's Mouth has a photo illustrating one very good reason to pull your boat for the winter.

A Tribute to the Swedish American Line covers the WWII Internment exchange ships GRIPSHOLM and DROTTNINGHOLM: 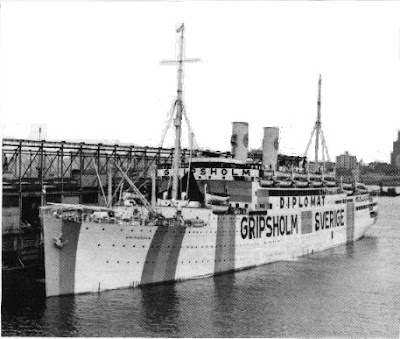 A great look into a not so well known part of WWII.

A related post at the German American Internee Coalition has the interesting story of German seaman Werner Ahrens who was removed from his ship, the Standard Oil tanker SS CLIO, along with the rest of the German Crew in while in New York in 1939 and was eventually interned in 1941.

President Roosevelt signed the “Proclamation of Unlimited National Emergency” on May 27, 1941. Unfortunately, this sealed my father’s fate. He was sent by train from Ellis Island to Fort Lincoln, North Dakota, an armed high security facility. The seaman were the first civilians incarcerated in internment camps, primarily Germans and Italians, Japanese came much later.

Casino boat blown about by Hurricane Katrina still not a vessel - In an unpublished decision, the US Court of Appeals for the Fifth Circuit ruled that a permanently-moored casino boat is not a vessel. In the instant case, the casino boat, floating in a marina in Biloxi, Mississippi, was moored to six steel dolphins using heavy “H” beams and received water and electricity from land-based sources. During Hurricane Katrina, the casino boat was ripped from its moorings, carried several thousand feet through flood waters and over a highway, and crashed into a hotel. The owner of the casino boat filed suit, seeking exoneration from or limitation of liability under the Shipowners’ Limitation of Liability Act. The hotel owner filed a counterclaim, seeking recovery of damages. The court held that a watercraft that has been permanently moored is not capable of being used in for maritime transport and, thus, is not a vessel for purposes of federal admiralty jurisdiction. Petitioner’s argument that the casino boat was “in navigation” when it struck the hotel was found to be unavailing. In the Matter of Silver Slipper Casino Venture LLC, No. 07-60330 (5th Cir., January 31, 2008). - Dennis Bryant Holland & Knight homepage (Used with Permission)

Owner sues US over grounding - NEW YORK, NY 7 February – Seaspan Ship Management and Seaspan Corp, owners of the container ship New Delhi Express are suing the US government over an April 2006 grounding in Kill Van Kull – blaming the mishap on inaccurate charts and an out-of-position buoy. The $3M lawsuit was filed last week in the US District Court for the Southern District of New York on Seaspan’s behalf by the maritime law firm of Chalos, O’Connor & Duffy. In the lawsuit, the plaintiff charges that the vessel grounding occurred because the ship was relying on Bergen Point Lighted Buoy 14 while making a turn in heavy fog. The suit alleges that, “unbeknownst to the master, compulsory docking pilot or to the plaintiff”, the buoy was some 25 yards away from its charted position and that the pilot and crew relied on the charts. The suit specifically blames the USCG, which maintains the buoy, and the National Ocean Service and the National Oceanic and Atmospheric Administration, which maintains charts for the area. An earlier finding by the National Transportation Safety Board blamed the pilot in the grounding of the 4,253-TEU Hapag-Lloyd-operated ship. - Fairplay Homepage (Used with Permission)

I admit that I am an Arab extremist. I think the racist ex dictator Saddam Hussein was right when he stated that the gulf is Arabian not Persian. Saddam Hussein was against his non Arab neighbors and tried to exterminate them with chemical weapons and so am I.