This Weeks Photos:
This weeks photos was taken by photographer Pieter van Marion. It is of the Crane Transport Ship ZHEN HUA 10 which ran aground due to a storm which pushed it from its anchorage off Rotterdam. 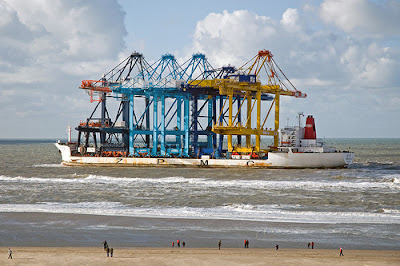 More photos posted on Flickr can be found here.

PortPictures.nl has more aground photos here.

Lloyds List also has front page coverage of attempts to refloat the vessel.

Chaotic Synaptic Activity has for his weekly series Monday Maritime Matters which covers this week: "His name is Vice Admiral Lawson “Red” Ramage, USN. As Skipper of the USS PARCHE (SS-384) while wearing the rank of Commander, he led his crew in such an action as to be awarded the Medal of Honor"

Robin Storm covers two other high profile shipping incidents of the past week, which was the very public grounding of the RoRo ferry RIVERDANCE and the evacuation of the captain and several passengers and crew of the RoRo Reefer vessel HORNCLIFF after it was struck by a force 10 storm which also managed to wash 60 - 90 containers overboard. The Telegraph (UK) Interviews two of the passengers who were enjoying their honeymoon onboard what is described in the story as a 'banana boat' as they describe the three large waves that knocked the ship on its side.

There has been all sorts of coverage lately over the kite-assisted cargo ship, but gCaptain goes above and beyond all the rest with the post "Ocean Kites - Top 10 Green Ship Designs". You did know that there were competing theories, right?

Scandinavian Shipping Gazette has more at "Harmless cargo that kills"

Sea * Fever has the photo and explanation to "So you’ve wondered what it would be like to drive one of those huge box-like car carriers". No wonder here, my first ship was the car carrier NOSAC RANGER.

Sea * Fever also has listed a number of maritime-related blogs, sorted by the level of education required to understand them. I was pleased to see that FFI rated at the high school level which matches with my goal that posts should be understandable to most people. (Understanding of course is different from agreeing with what I write.)

Bitter End covers "Missionary Boats". The cargo is the word (of Jesus.)

Neptunus Lex cans the new "Navy Working Uniform", however he is much kinder than those leaving comments, which frankly make valid points.

CDR Salamander has "What the Canadian Army can teach the USN" as well as a great photo of the USS CONSTITUTION.

The Guardian (UK) covers the news "How one clumsy ship cut off the web for 75 million people" which includes the following graphic: 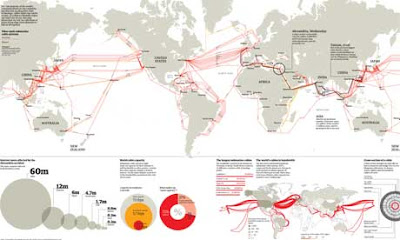 Examiner.com has a story on the lack of skilled labor for shipyards in the US. And you thought it would be a shortage of work.

Bellona notes the arrival of the German ship MV SHOUWENBANK at St. Petersburg.

The waste is from the joint German-Dutch nuclear fuel giant Urenco, which in 1996 signed a deal with Russia to import some 100,000 tons of uranium tailings by the year 2009, of which 80,000 tons has already been imported. EU countries by and large do not classify uranium tailings as radioactive waste, but the United States does. - Bellona

If it is not hazardous, then why ship it so far to be buried in Siberia?

EU Referendum has a further update to the melting Arctic Icecap with data indicating that the icecap has refrozen back to its normal size.

Professional Mariner explains that the "Coast Guard wasn't always in charge of mariners' documents". It used to be done by the Bureau of Marine Inspection and Navigation. More background can be found at Wikipedia.

Tims Times thinks that the VTS operators in Rotterdam have an infinite amount of patience when dealing with ships that are unable to communicate effectively in Dutch or English. (Keep in mind that international rules require that Management-Level deck officers have a working knowledge of English)

Tugster has some photos of vessels that have undergone a name change. (And in the case of the PATRIOT a complete makeover from the ex. FIDELIO.)

Hengineer prepares for deployment as the USNS KANAWHA gets ready to sail. 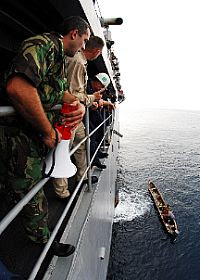 Shirlaw News Group has the possible threat to some isolated islands as the result of a shipwrecked fishing trawler.

Maritime Compass has the story and great photo of "Storm Uncovers Shipwreck On Cape Cod Beach". The power of moving water never ceases to amaze.

Hellenic Shipping News has "US coal export capacity will be stretched". US coal exports to Europe are set to double over last year's total, if the logistics to do so can keep up.

Without pointing to any specific post, here is the Lifeboat Scrapbook, which is "A scrapbook of the lifeboat year in Swanage as it appears to me: the characters, the boats, the shouts, training, thoughts and fun". Lots of photos and 'saves', including of a couple climbers.

Aftenposten (Norway) has a story on catching krill in Antarctica for production of 'nutritional supplements'.

THE PRIVATE ISLANDS BLOG has "Hugo Chavez's Private Island" noting that you can now visit it, for a price.

The January edition of MarineLog is online: 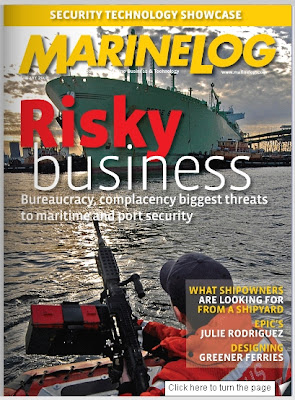 USCG – Cosco Busan ISPR - The US Coast Guard issued a press release announcing the availability of the Incident Specific Preparedness Review (ISPR) report on the response to the oil spill from the M/V COSCO BUSAN in San Francisco Bay on 7 November 2007. The report did not examine the causes of the spill, only the response thereto. The major areas for improvement identified in the report include having more experienced personnel on duty or on standby; prompt communication with local officials and the public; and improved planning for training and utilization of volunteers offering assistance in the response effort. The report found that the actual response effort in this spill was quite good, but that the initial investigation and external relations were lacking. The Coast Guard also published a Timeline showing the various notifications and response actions, as well as a Hindcast, showing the estimated movement of the spilled oil through San Francisco Bay and adjacent waters in the hours after the spill. Finally, the Coast Guard released a PowerPoint document that walks through some of the major points of the ISPR. (1/28/08). - Dennis Bryant Holland & Knight homepage (Used with Permission)

Port incompetence costs millions - DUBAI 29 January – The shipping industry is losing $615M a year because of port inefficiencies and poor management, says Maersk's Poul Woodall. His analysis, which was delivered to shocked delegates during the MEED Port Development Conference in Dubai yesterday, took into account 16,000 port calls over a seven-year period throughout the Middle East. “We find a decline of productivity of 10-20% over seven years,” said Woodall. “What other industry would accept such a development?” Adding to the controversy, Woodall lambasted an over-emphasis on building new (and expanding old) infrastructure instead of increasing efficiency. He also criticised over-priced ports with poor-performance: “We have a facility charging five times more cost at a third of the productivity [of the best].” Further stoking the fire, Woodall told the conference that shipping lines would be prepared to pay an increased price for productivity improvements. Further details will be available in next week's Fairplay magazine. - Fairplay Homepage (Used with Permission)