This Weeks Photos:
I am off to Riga, Latvia today. Since Riga is a port city, here are a couple of photos from the Freeport of Riga: 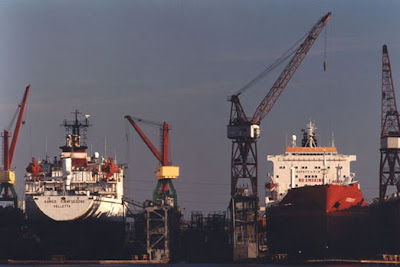 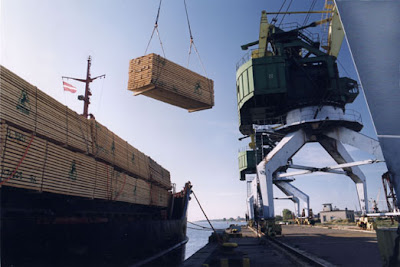 (Timber Cargo)
More photos can be found on their website here.

This Weeks Items:
Today is Graduation Day at the United States Merchant Marine Academy. Senator and (open borders) Presidential Hopeful John McCain is the speaker. Marketwire has the Press Release and Maritime TV will have a live webcast of the entire ceremony, which will also be available for later viewing.
I was at a Kings Pointer wedding over the weekend and I heard from multiple people that all graduates will be/are being forced to take sailing jobs. Midshipmen upon entering the Academy agree to sail after graduation as part of their service commitment. In practice, there has not been enough sailing jobs for all graduates. (On my last ship in 94, I was one of four licensed Third Officers sailing as unlicensed ABs. The Third Officer had left Military Sealift Command because he was one of over 700 Third officers sailing in unlicensed positions.)

The issue at hand is that some of these graduates are going to be forced onto foreign-flag vessels. Those very foreign-flag LNG vessels that the Maritime Administration signed crewing agreements with. Since I have been told this third-hand and have been unable to verify this, and apparently those trying to have yet to get a clear response from the Maritime Administration. It would be appreciated if a reader in-the-know could clarify in the comments section.

If true, this sounds like somewhat of a raw deal to graduating midshipmen not interesting in sailing foreign flag. (Keep in mind that it is the country whose flag flies on the stern whose laws apply on the vessel, not the US.) There is also the significant issue of stopping the flow of new graduates into shoreside jobs. That is unfair to the firms offering internships and unfair to the graduates themselves who, when they do go ashore, will end up working under graduates from the other state maritime schools.
gCaptain has this post "1/4 of LNG Crews must be U.S. Mariners" covering the Massachusetts Maritime Academy graduation ceremony where Maritime Administrator Sean Connaughton was the graduation speaker.
Senator McCain's website is here.

----------------------------
Eagle Speak has "Memorandum from the President on Maritime Security (Piracy) Policy". Also at Eagle Speak: "Sunday Ship History: DESRON 23"
Tims Times is blogging from a new home (http://timstimes.net/) and posts about encountering other mariners during a training course he attended while on vacation, and the sad fate of one who he met.
Sailors, Mariners & Warriors League has coverage of the deadly fire on the Philippine ferry MV CATHLYYN.
The International Herald Tribune has "Bottlenecks worsen at European seaports" which includes this little nugget of information:

Felixstowe and Southampton in Britain, Rotterdam and Hamburg, among the biggest ports in Europe, have all had to turn away container ships this year because of a lack of docking space, industry officials said.
Barge operators are facing delays in Rotterdam and Antwerp, Belgium, with the waiting time reaching more than two days in the Netherlands last week. Trucks that carry containers inland wait for hours in Rotterdam. - IHT

Cargo Law has photos and a summary of the '2007 Nightmare Cargo Prize Contender' M/V PASHA BULKER grounding in Australia.
I am Facing Foreclosure (the world's most hated blogger) manages to prove once again why he is so hated by scamming his way to Australia where he finds the PASHA BULKER fast aground.
gCaptain has the "Top 10 Rescue at Sea Videos from the U.S. Coast Guard"
Vessel Assist & Rambling Maritime Information has yet another yacht ship lift gone bad. (MV RICKMERS DALIAN?) Go and see the dramatic pictures.
Consul-at-Arms has the capsize of a boat carrying Haitian migrants, resulting in death.
Life at Sea has a summary of the tradition of Equator crossing ceremonies.

Freaque Waves has "Wave of the Day!"

CDR Salamander has the death of the Austrian Navy after 600 years.

The Pilot Boat has photos of the UK-Flag LPG carrier SUFFOLK as it heads to drydock.
MarEx Newsletter has "Apparent Maltese Inaction in Search and Rescue Efforts has all Sides Upset".
The Wall Street Journal has an editorial on the Law of the Sea Treaty titled "Lost at Sea"
National Review's The Corner also trashes the Law of the Sea Treaty asking "Do We Really Want to Create Another Mini-U.N.?"
The Chicago Tribune has Russia's attempts to seize oil rights up in the Arctic before the ice melts to allow access.
San Francisco Business Times has American President Lines upcoming test of running a container ship, the APL CHINA, on shore power in it's attempt to reduce ship emissions.
Helsingin Sanomat has Russia's plans to use 150,ooo tonne tankers possible for exporting oil from St. Petersburg through the Gulf of Finland.
All Africa.com has the news of South Africa maritime training centers in South Africa offering training to Angolans.
Macsmind has "Now that’s a fish!"

Maritime Compass has word of a job opening at the Sea Education Center in Woods Hole.
It is one thing for a blog like Hengineer stops posting for an extended period of time, but you have to wonder then a site like Shipping Times posts nothing in almost two weeks.
Haight's Maritime Items has:

Cathlyn D reveals unsafe practice - MANILA 13 June – The inquiry into the fire on the Philippines domestic ferry Cathlyn D, and the ship's subsequent sinking, has been hindered by the usual problems of overcrowding and unlisted passengers. An initial investigation showed that there were unauthorised or unlisted passengers onboard the vessel, and several complaints about availability of life-saving appliances. Philiipine Coast Guard officials said there were at least 20 passengers on the ship no on the manifest, and several others had been "smuggled" on without tickets. These violations are issues that the Special Board of Marine Inquiry will focus on when the board convenes today. PCG commandant Damian Carlos said that Cathlyn’s authorised passengers and crew totalled 267 but a running tally of those rescued and killed (five so far) now stands at 287. He said this would be a violation of the law requiring ship captain to attest that a vessel is seaworthy and not overloaded before it leaves port. The fire, which razed the ferry while in the waters of Paluan, Occidental Mindoro, is said to have began at the vessel cargo hold number 2 where combustible boxes made of Styrofoam are being kept. Vessels are required to have lifejackets and living quarters for all passengers and sufficient safety and firefighting equipment, Carlos said - Fairplay Homepage (Used with Permission)

Submissions for future editions:
Please submit articles for inclusion in next week' edition using the following submit form at Blog Carnival. You are also welcome to email photos for inclusion in future editions as well as suggest area of coverage.
** Sponsorship **
Send me an email (address in the sidebar) if you would like to sponsor an edition of Maritime Monday. I accept money and gear.
Previous Editions:
Here or click on the label below 'MaritimeMonday'.

Hi Fred, thanks for the link to my new address!
Keep up the good work!
Cheers Tim.

Hi, Just take a look at the jobs in Hyderabad, You can find more companies hiring fresher and experienced persons in Hyderabad

Interesting website.Very sad to read about graduating officers from the brilliant King's Point Academy, cannot get jobs in their own, now depleted Merrchant Marine.Blame your Government for that in embracing globalisation, lock stock and barrel.The U.S. has a LOT to offer to the world, and the sea, in terms of training, tradition and good operation.Good luck to you all. J.Brunton ShipomasterRet'd ,Melbourne,Australia.