Pasha Hawaii Transport Lines is a joint venture between The Pasha Group, a California-based automobile handling and logistics company, and Strong Vessel Operators LLC (SVO), a Connecticut-based ship owner and operator. The Pasha Group has been involved in cargo handling/logistics and terminal operations for nearly 60 years, with current port facilities at the ports of San Diego and Los Angeles, California, and Baltimore, Maryland. - Homepage

The company currently has one ship, the MV JEAN ANNE. 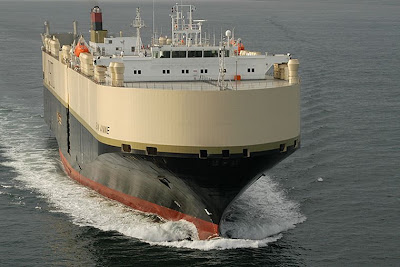 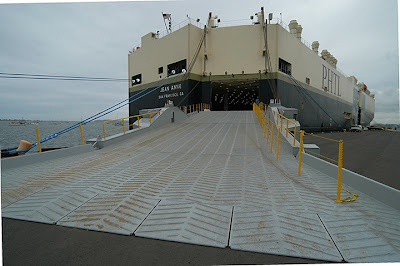 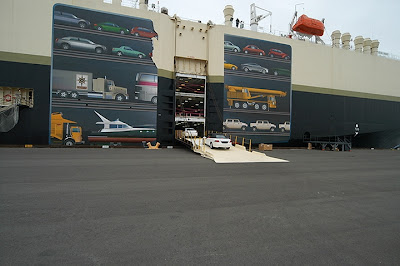 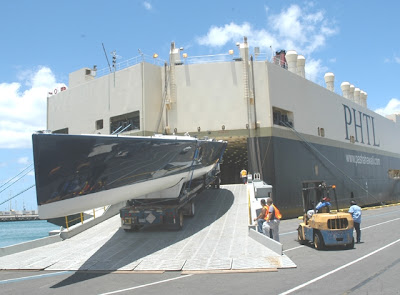 (Not just for cars) 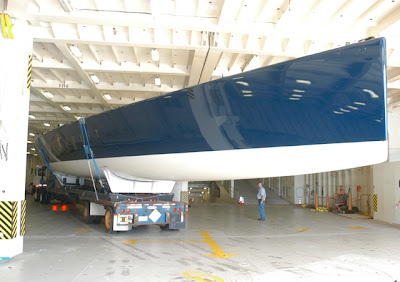 Here is a time-lapse presentation of the vessel's launch in 2004 at the VT Halter Marine Shipyard in Pascagoula, MS in 2004 shot by Maritime New Media.

Also be sure to check out his "Sunday Ship History: Troop Transports WWI".

The Wall Street Journal has an update on the Finnish Viking Line's attempt to reflag one of it's vessels from the high-cost Finnish Flag to the low-cost Estonian Flag. (The story mentions that the vessel was reflagged, but I think that is not the case.) At the moment, things are in favor of the unions and their goal to protect Finnish-Flag shipping jobs. However, that is truly short-sighted as no shipping company in their right mind will flag another vessel in Finland unless they have no other option. The Estonian Flag is bound to win in the long run, as the money will flow to the lower cost option with the older Finnish tonnage being retired instead of replaced. (The Finland-Estonia traffic exists simply because everything is cheaper in Estonia.)

The International Herald Tribune has France's arrest of the Lithuanian-Flag Le VYTAUTAS at sea for suspected dumping of oil.

Shipping Times (UK) has "Transportation congestion will harm world economy", a warning from the CEO of American President Lines.

CDR Salamander covers the Somali hijacking of the DANICA WHITE throwing harsh criticism at the US Navy for letting the ship escape into port. (Among other things) Many other bloggers covered this event including Eagle Speak and myself, who apparently misdirected my anger at the French. Helsingin Sanomat has confirmation today that the men quietly slipped back into the United Arab Emerites.

CDR Salamander also has for his Fullbore Friday "USS Arikara (ATF-98) at D-day - the corpsman of the landing beaches."

Gates of Vienna has multiple postings concerning Somalia's piracy problem including "Q-Ships for the Somali Coast?" and "The Territorial Waters of a Failed State"

Professor Bainbridge has "Pirates and Governance"

Pajamas Media has yet another example of Europe's treatment of migrants found in distress at sea in "Europe's Shame" where the migrants were left clinging to tuna nets for days, because nobody wanted them. - Maritime Monday 62

"Nobody" in that case was Malta and Libya.

This week Reuters has Malta's message to the EU that it will not become a dumping ground for illegal migrants rescued in the Mediterranean. (Mauritania and Spain have already promised not to assist migrants at sea again.) The Times of Malta has "The fate of 50 illegal immigrants was hanging in the balance last night, a day and a half after Libya and an Iranian cargo ship failed to go to their aid despite requests from Malta."

The Stupid Shall be Punished has the potential scandal of a Taiwanese Admiral, Admiral Shen, who is charged with blowing off a visit to the submarine USS SANTA FE during a fleet visit so that he could go to a strip-tease show.

gCaptain has must-see video of a rogue wave, as caught on the Discovery Channel's Deadliest Catch. The show's host, Mike Rowe, has mentioned that this is probably the most requested scene from the entire series.

The BBC has "Fishing 'destabilises Black Sea'" which does a great job explaining how other species thrive when their predaters are removed from the ecosystem. The end result being nothing left but jellyfish.

The Pilot Boat has what appears to be questionable personnel transfers from supply boats in the Gulf of Mexico.

National Geographic has as it's 8 June Photo of the Day "Overcast skies portend a rough day for boats on Iceland’s Lake Myvatn."

The BBC also has Spain's sea war against Odyssey Marine Exploration as part of their claim that the company's discovery of $500 million in sunken treasure belongs to the Spanish Government. (Now if they only applied 1/10th the energy to save migrants off their coast)
Life at Sea has "Ship Breaking : Environmental and Health Hazard"
Ocra Marine Services Limited has the European Commission's Green Paper on better ship dismantling for the environment.

Never Sea Land has the replica HMS ROSE/HMS SURPRISE in "the largest travel lift in the US."

Maritime Compass notes that the Battleship USS NEW JERSEY has a job opening for a Director of Education.

The Log has the deadline facing those wishing to salvage the SS CATALINA from it's half submerged position in the Port of Ensenada.

Danger Room has the story of the attack on the Argentine submarine SANTA FE during the Falklands War.

Finally, people often ask why sailors go to sea. Itching for Eestimaa (Estonia) provides a good incentive with his post "Highway to Hell".

National Oceans Month, 2007 - The White House released a Presidential Proclamation designating June as National Oceans Month. Among other things, the Proclamation discusses US efforts to protect the maritime environment while preserving the navigational freedoms essential to the security and prosperity of every nation. (5/31/07). - Dennis Bryant Holland & Knight homepage (Used with Permission)

Galileo hindered by Euro-squabbles - BRUSSELS 04 June – The French newspaper Le Monde reported on Saterday that Franco-German rivalry is behind disagreements in Brussels over how to proceed with the funding for the Galileo programme. EU transport ministers are due to meet later this week to agree a strategy for finding €2.4Bn ($3.2Bn) in extra public funds to keep the Galileo project afloat. However, according to Le Monde, Germany is the most reluctant of all countries for the money to be found from the EU budget – the option favoured by the Commission and most other member states, including France. A source said: "distrust between Berlin and Paris" lies behind much of the discord. Germany is concerned it will lose out from the funding review: three of the main contractors involved in Galileo, French Thales and Alcatel and their Italian ally Finmeccanica, are trying to force a review of the distribution of tasks negotiated with their biggest rival, EADS, which Berlin is resisting, demanding respect for the agreements made when the project was first launched. - Fairplay Homepage (Used with Permission)

Previous Editions:
Here or click on the label below 'MaritimeMonday'.
.
Posted by Fred Fry at Monday, June 11, 2007