This Weeks Photos:
While China is well-known for exporting most everything under the sun. However, they are also big importers, mostly of raw materials. But their definition of raw materials is pretty broad to include about 40 different grades of 'waste paper' (including one that permits up to 5% non-paper material) as well as garbage.

Of course, there is a limit to what they will accept, and Chinese Customs is tasked with ensuring that the imported material is acceptable. 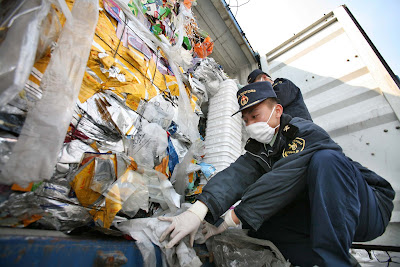 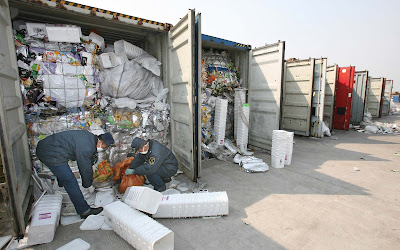 It is amazing what you can find inside a shipping container.

After all, since you have the move the container anyway, why ship it back empty? Just lower the rate until you have shippers willing to stuff them.

Eagle Speak has the capture of the Danish ship DONICA WHITE by pirates far off the coast of Somalia.

Also be sure to check out "Sunday Ship History: An attack on the United States" covering the successful 1916 attack by German spies on the ammunition depot in New York Harbor. (You learn something new every day.)

Shipping Times (UK) has the death of two crewmen on the cargo ship FEMBRIA after entering a cargo hold with a low oxygen level.

Tims Times (on leave from sea) has the read of the week with "How to upset the English mate". Friction between Deck and Engine departments is well known. (I had caused one captain to go ballistic on me when I had requested to spend some learning time with the engineers since there was another deck cadet on board and only enough deck work for one of us.) I can't imagine adding regional friction into the mix.

Sailors Mariners & Warriors League has the dispute in Australia over the vessel MV CAPO NOLI's self-sustaining cargo gear and the shoreside stevedore's boycott of the vessel unless they use local labor to unload the cargo.

Pat Dollard has coverage of the largest US Naval Force in the Persian Gulf since 2003 sailing off the coast of Iran.

The Jawa Report has "Aussie Gunboats to Patrol Philippines"

MarEx Newsletter rightly criticizes a proposal to split apart the US Coast Guard.

Pajamas Media has yet another example of Europe's treatment of migrants found in distress at sea in "Europe's Shame" where the migrants were left clinging to tuna nets for days, because nobody wanted them.

"Reuters has the news of Spain and Mauritania refusing to accept a disabled ship with approximately 400 suspected illegal aliens. The vessel is currently being tended to by the Spanish Coast Guard, which Mauritania claims towed it out of Spanish Territory and into theirs. (Now why would they do that?)"

"Reuters has Mauritania's and Spain's shameful promise not to assist migrants in distress at sea again."

Steeljaw Scribe notes the start of last voyage of the aircraft carrier USS KITTY HAWK which is expected to be decommissioned next year.
After reading that, go to his homepage and check out what has to be the most extensive coverage of the WWII Battle of Midway.

OpinionJournal has "Bond of the Sea - The U.S. Navy has always faced unexpected threats."

KKORNER at Vorkt remembers his experience answering an ad to join the Great Lakes Cruiseship SS SOUTH AMERICAN in what turned out to be her (the ship's) last year sailing.

The Guardian has Japan's use of humpback whales as bargaining chips to further their other whaling goals.

Daled Amos presents the official Version of the USS LIBERTY 'friendly fire' incident during the 1967 Israeli Six Day War. This is in response to Australian Politician Tim Fischer's (commonly believed) comment that Israeli deliberately attacked the ship printed in Australia's The Age here. (I believe there is more to the story than what the official version presents, as do many other maritime professionals, not least of which includes the crew of the ship!)

A summary of the history of the USS LIBERTY can be found at Eagle Speak. The USS LIBERTY Memorial site is here. Go there are read the quotes from American Officials concerning the attack.

I wonder what communication Israel thought this ship overheard? That would have been a reason to sink the ship.

Life at Sea has all you ever wanted to know about sea-sickness.

Canna Zine has the Greek Coast Guard's fishing for hundreds of kilos of cannabis found along the coastline.

Scheepvaart Noord Zee Kanaal has a photo of the bulk carrier GREAT CHALLENGER.

Fogonazos has photos of "How to Build an Offshore Wind Farm"

Boom or Bust: Miami has a photo of a cargo ship barely clearing the Metro-Mover Bridge. (Well ten feet is actually lots, when you figure that the ship's draft changes based on a change of tons of weight placed on/off the vessel. Just make sure your tide calculations are correct!)

Finally, Please Don't Rescue me had the amazing luck to be stranded on a deserted island with everything he needs, including internet access.

IWC – reducing the threat of ship collisions with whales - The International Whaling Commission released an Update on the United States’ actions to reduce the threat of ship collisions with North Atlantic right whales. Among other things, it reports that the National Oceanic and Atmospheric Administration (NOAA) and its partners have produced the Prudent Mariner’s Guide to Right Whale Protection. This is a computer-based, interactive CD-ROM training resource for use in bridge management training aboard ship. Copies (as available) may be obtained from Captain Don Lewis, NOAA Right Whale/Shipping Industry Liaison. (5/22/07). - Dennis Bryant Holland & Knight homepage (Used with Permission)

Recruitment headache for Norway - OSLO - 30 May – Young Norwegians no longer want to go to sea, fewer of those already at sea plan to stay for long, and many who stayed are being lured into the offshore or non-maritime sectors. In the run-up to Nor-Shipping, Fairplay has heard from BW Gas, the Oslo-based LNG and LPG carrier specialist, that the intake of Norwegian cadets was reduced substantially some years ago after it had emerged that only 14% of the 1,000 cadets enlisted between 1990 and 2000 were still with the company at the turn of the millennium. Most had gone ashore or transferred to offshore where the pay is better and the breaks longer. Filling the gaps with citizens of non-European Economic Area countries would mean tackling issues such as work and residential permits plus cultural issues as well, says BW Gas chief executive Jan-Haakon Pettersen. Filling future senior-level vacancies will be a real problem in five years' time, he adds. Golden Ocean CEO Herman Billung admits he is worried by the dwindling number of Norwegians with sea experience available for work in the operations department. Meanwhile Utkilen CEO Geir Mjelde calls on companies themselves to tackle the issue of recruitment, not just leave it to the Norwegian Shipowners Association, which is doing a good job promoting the industry. Fairplay magazine publishes an in-depth assessment of Norwegian shipping in its 7 June issue. - Fairplay Homepage (Used with Permission)