This Weeks Photo:
A photo of the JPO ARIES from the website of German Shipping Company Schiffahrtsgesellschaft Oltmann. The ship was launched in 2001 and this appears to be a picture of the vessel in the shipyard. 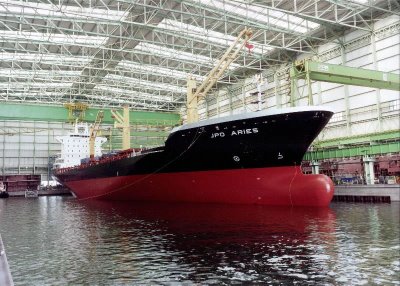 This weeks items:
Eagle Speak has news of a Crewman on the QUEEN ELIZABETH II busted while attempting to smuggle over 700,000 cigarettes. (This guy must have been a complete idiot because every sailor knows that UK Customs searches sailors quarters and they always find contraband.)

Sailors, Mariners & Warriors League has news of an explosion on the Mexican Tanker QUETZALCOATL resulting in at least 8 deaths.

Spiegel Online has coverage of Polish Customs agents secretly boarding a German passenger ship and then the ship kidnapping them back to Germany.

The MarEx Newsletter has coverage of a ship's cook receiving 90 Months in prison for a shipboard stabbing. Apparently he didn't take criticism of his food very well.

The Stupid Shall be Punished has coverage of Japanese Sub maintenance. ("for official use only" "top secret")
Molten Eagle has "Three Submarine Radiation Stories".

EU Referendum tears apart a poorly-researched Times UK report calling for the end of commercial fishing in the EU for cod.

Marine Link covers the proposal to build an offshore wind farm off Delaware.

Stolen Moments of Island Time notes that no country has yet ratified the UN's Suppression of Unlawful Acts (SUA) at sea convention.

AstoriaRocks.com has coverage of US and Canadian Coast Guard rescue teams conducting joint training at the US Coast Guard's Air Station Astoria.

Marine Log has news of US-Flag Carrier Matson Navigation's awarding of a contract to Atlantic Marine Alabama to convert the M/V MOKIHANA to a combination RORO Container vessel.

Gun Muse has coverage of the controversy over planned live-fire zones for Coast Guard training in the Great Lakes.

The Moller Skycar auction is over. The high bid was just over $3 million but was still under the reserve price, leaving the vehicle unsold.

Yeah, that will keep countries from treating seafarers like criminals.

UK to fund freight shift to water - LONDON 17 October – THE UK’s Department for Transport (DfT) is about to launch a new Sustainable Distribution Fund (SDF), the key aim of which is to offer funding on projects that shift freight from roads to water and rail. When launched next month, the fund will have an emphasis on modal shift, operational efficiency and value for money. The fund will bring together the existing grant schemes provided by the DfT, such as the Freight Facilities Grant and the Waterborne Freight Grant. The SDF will provide up to 50% of any modal shift project and over the past five years such funding has amounted to £34M ($63.5M) out of a budget of £53M, leaving £19M which will be returned to the UK Treasury. Speaking at a seminar organised by Sea and Water – the UK short-sea, coastal and inland waterway promotional body – Stephen Fidler, head of the logistics policy division at the DfT, explained that the new fund will operate through a quarterly bidding round with the first due in December 2006. The fund for 2007-08 will have £7M available for Freight Facilities Grant, and £18.6M in its resource budget supporting new waterborne projects.Lloyd's Register - Fairplay web links

Experts say ship sanctions will not impact North Korea - SANCTIONS against North Korean flagged shipping could impact chiefly on ships trading in the Black Sea and Eastern Mediterranean, according to an analysis by Lloyd’s Marine Intelligence Unit.

The likely corollary is that such measures will have limited direct impact on the Pyongyang regime. Lloyd’s List asked the fellow Informa Group subsidiary — recognised as a leading independent provider of shipping data — for a breakdown on the North Korean fleet and its movements. According to the results, there are 412 North Korean vessels live on the Lloyd’s MIU database. But in beneficial ownership terms, only around half are actually controlled from within the Stalinist state. The other half are operated by owners spread around the world.

Such a finding is in line with the flag’s reputation as perhaps the world’s ultimate flag of convenience, even though it is not formally regarded as such by the International Transport Workers’ Federation. Industry insiders believe that the flag is particularly favoured by some of the more publicity-averse owners in the former USSR countries and in Syria. North Korean flag vessels are also owned or operated by companies registered in Belize, Greece, Iraq, Lebanon, Liberia, the Marshall Islands, Panama, Pakistan, Romania, St Vincent and the Grenadines, Singapore, Turkey, the United Arab Emirates and Yemen. In June there were reports that nine companies registered in Delaware also owned North Korea flag tonnage, even though that has been illegal under US law since May 8. Ironically, North Korea is not a cheap option. It is thought to charge two or three times the fees levied by bargain basement flags. Nor is the fleet’s trading pattern dominated by serving the needs of the regime, which for political reasons tries to be as self-sufficient as possible. In practice, it is heavily dependent on China, which provides 90% of its oil and 80% of its consumer goods. But these cargoes tend to be trucked in. LMIU said that there were 606 recorded moves involving North Korean vessels in August. Of these, 186 involved arrivals or departures from Black Sea ports, compared to just 115 arrivals or departures in the area designated ‘Chinese waters’, which includes North Korea itself, as well as China and the Russian Far East. There were 83 movements involving ports in the east Mediterranean, 73 involving ports in North Africa and 34 involving ports in the Red Sea. No North Korean vessels arrived or left western Europe, although there was one movement involving Scandinavia and 38 involving southern Europe. The best guess has to be that, if North Korean registration proves inconvenient to non-North Korean owners, they will simply flag hop to another of the world’s more accommodating administrations.