This week's photos:
FPSOs go round. 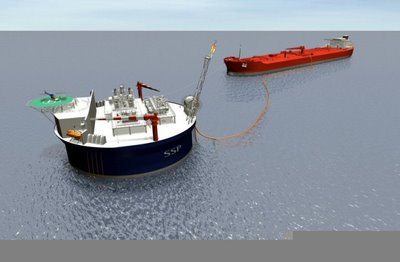 The SSP FPSO is used as a floating production and storage for hydrocarbons. The hydrocarbons are stored in tanks in the hull of the platform and are transported by shuttletankers or by pipe line to onshore refineries. The hull is fitted with machinery, power generators, transformators, electric boards, fire control systems, ballast pumps and cargo pumps. The main components on deck are living quarters with control rooms, workshop, life vessels, helipad, cranes, on- and offloading system for oil, and anchorwinches. The FPSO also has a processing plant for hydrocarbons installed on deck. Depending on characteristics of the field, the processing plant has different modules for processing oil, gas, and water.

The SSP FPSO is more than a computer image. 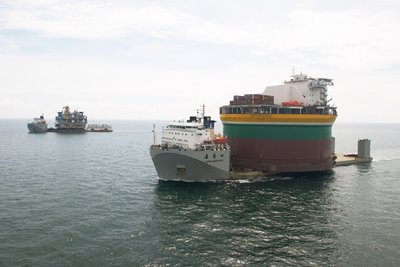 Environmental Republican celebrates the Birthday of the US Navy.

Eagle Speak has coverage of the US donating patrol craft to the Kenyan Navy.

Watcher Magazine has the news that Russia's Gazprom will build the world's largest offshore gas field off Murmansk, the Shtokman Field, without any international partners as was expected. Also, none of the gas will be headed to the US, as was also expected.

Sailors, Mariners & Warriors League has news of the conviction of the Captain of the ZIM MEXICO III of criminal misconduct as a result of a port accident that resulted in the collapse of a container crane, killing an employee working on it.

Mainichi Daily News has coverage of a drunk Chief Engineer going 'Berserk' off the coast of Japan.

Zaman Daily Newspaper has news of the sinking of the Comoros-Flagged vessel MAGIC in Turkish waters.

Bellona has news of a new long-term storage facility for spent fuel for Russia's nuclear icebreakers. The fuel was being kept on 'Technical Service Ships'. One of them was the LEPSE, which currently houses 639 spent fuel assemblies. Go here to see a summary of the vessel, which has been dubbed the most radioactive ship in Europe, and here for a short history of the nuclear waste ship.

The Times Online has the story of Norway's closure of two offshore oil platforms due to faulty lifeboats.

The Stupid Shall be Punished has news of a port call in Hong Kong for the USS Honolulu (SSN 718) and USS La Jolla (SSN 701) fast attack submarines tied up alongside USS Frank Cable (AS 40) Submarine Tender. Yes, in Hong Kong.

EU Referendum covers the changing purpose of the EU's Galileo GPS system from civilian to military as the costs skyrocket out of control and the realization sinks in that businesses are not willing to pay for something that they can already receive from the US for free. (To be operational in 2010, maybe.)

Smart Tech Writing has an explanation of Flotsam, Jetsam, and Lagan.

Marex Newsletter questions if the Lake Charles LNG Terminal is a "Model for Success or a Recipe for Disaster." Also, on their homepage, they have an offer to send you a free copy of their magazine. (You can also sign up for their newsletter.)

Treehugger has coverage of harnessing wave power in Europe.

The O.E.S. Project Web Log (Operation Enduring Service) is showing signs of frustration. Not familiar with the project? Check out The Dread Pundit Bluto for a short summary.

Check out photos of the massive boat lift at the Krasnoyarsk Hydroelectric Dam in Russia.

Alaska Report has an update on the 'toxic ship' PROBO KOALA going back out to sea.

President signs SAFE Port Act - The White House issued a news release stating that President Bush signed into law the Security and Accountability for Every Port (SAFE Port) Act of 2006 (H.R. 4954). Among other things, this bill, also known as the Port Security Improvement Act of 2006, modifies the Transportation Worker Identification Credential (TWIC) program by requiring the prompt issuance of TWIC cards to maritime employees and the initiation of a pilot program for installation and use of card readers. It also codifies the Customs-Trade Partnership Against Terrorism (C-TPAT) and the Container Security Initiative (CSI) programs. (10/13/06).

Crew shortage spurs Conti reflaggings - HAMBURG 09 October – German KG financier Conti Group, one of the staunchest supporters of the German flag, has been forced to transfer more of its ships into open registries this year because of the acute shortage of German masters. Managing director Nikolaus Pröls told journalists in Hamburg today that five 1,600-teu vessels were reflagged to Liberia this year as its pool of German captains has become stretched to the limit through retirement and poaching by other German owners. "Reflagging has only taken place on a limited scale so far, but the pressure is rising," Pröls warned. Irrespective of the personnel shortage, Conti's fleet is set to yield record payouts for private investors this year, even exceeding the very good result of 2005. Pröls predicted overall payouts of euro170M ($214M) after euro144M last year. Current charter income levels across Conti's 80-strong fleet will also enable it to write off the outstanding debt for another eleven ships, he added. Lloyd's Register - Fairplay

The Coast Guard responded to the accident near the Cypremort Point State Park after reports of 30.5m flames in the area. State police said a tugboat pushing barges had struck the natural gas pipeline, adding emergency services were working to put out subsequent fires.

Finally, Gizmodo notes that the Moller 'Skycar' prototype is for sale on ebay. You have until October 19 to bid. (High bid was just over $2 million as of this posting.) Be sure to check out the Q & A at the bottom. No question is too silly!

You should link to stories from http://www.marinelog.com, then you would have noted that though Bush signed the SAFE Ports Act he issued one of his infamous "signing statements" saying the executive branch will construe large pieces of the Act as "advisory."

Hello and thanks for the opportunity to post on your blog. I am the webmaster of a website dedicated to cruise ships, and I am working on improving my content constantly. Hopefully I will find some more interesting info on your blog as I will check back soon. Till then, here are a few tips on selecting a cruise that I hope you and your readers will find interesting:
How long do you plan to cruise? (from three to fourteen nights, to world cruises which are the longest, lasting up to three months);
Where and how to search? You have two alternatives: a cruise travel agent or agency or the websites of cruise lines;
Facilities offered during the cruise (for instance, if you like to gamble you may want to choose a cruise line that has casinos on board; maybe facilities for your children which are offered by all major cruise lines);
Port of departure. You can choose it by the proximity to your home, if you want to save money and avoid expensive airfare;
Land and shore excursions (they are offered by all cruise lines, and last from two to three days, before, after or even during the cruise vacation). This kind of excursion gives you the opportunity to explore new cultures, destinations, visit new places, practice water sports, do some shopping etc.
If you’d like to read more about discount cruises or finding last minute cruises you are more than welcome to visit my website, Cruise-heaven.com
Have an excellent day!
Mike Rad

I removed the global fuel scam comment, because I think it's a scam.