Welcome to this (post vacation) 28th edition of Maritime Monday. 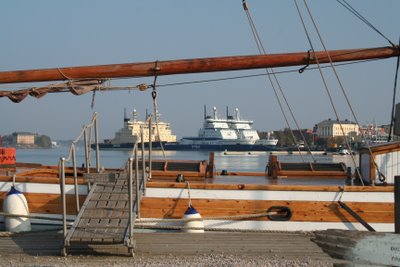 John Fund at the Opinion Journal asks "Why did Congress kill a measure to keep felons out of U.S. ports?" Here is a taste:

Congress is patting itself on the back for passing the Port Security Act last Saturday. But the day before, a House-Senate conference committee stripped out a provision that would have barred serious felons from working in sensitive dock security jobs. Port security isn't just about checking the contents of cargo containers, it also means checking the background of the 400,000 workers on our dock.
The problem is massive. The Department of Homeland Security recently investigated the ports of New York and New Jersey and found that of 9,000 truckers checked, nearly half had criminal records. They included murderers, drug dealers, arsonists and members of the deadly MS-13 gang. It concluded that these security gaps represent "vulnerabilities that could be capitalized by terrorist organizations." A dock worker who has been convicted of smuggling drugs is a potential danger. "Instead of bringing in 50 kilograms of heroin, what would stop them from bringing in five kilograms of plutonium?" asks Joseph King, a former Customs Service agent who now teaches criminal justice at New York University.

Read the rest to understand how Senators Daniel Inouye (D- Hawaii) and Ted Stevens (R- Alaska) and Congressmen Peter King (R- NY) and Bennie Thompson (D-Mississippi) are gutting attempts to secure our ports. My favorite excuse to continue to allow convicted felons working in ports comes from Union Communications Director Steve Stallone: "barring felons from jobs at secure dock facilities would be "double jeopardy" and could push them back into crime to make a living."
CREEations adds to the Opinion Journal piece with his own port security observations.
Red Herring has news of KITESHIP, a winner of transportation efficiency; using wind power as power assist for ships. (Company website here.)
EagleSpeak has coverage on China getting a little edgy about the security of it's sea supply lines and the ability of the US to cut off required supplies.
Pacific Islander has the loss of the bulk ore carrier GIANT STEP in Japan.

The Stupid Shall Be Punished answers the question of how many sailors can you fit on an attack sub's bridge. (Do they have any cup holders up there?)
Oilchange International has coverage of an LNG Terminals being built in Louisiana.
YLE (Finland) has news of the blockade of a ship in Kokkola, Finland by the Finnish Seamen's Union. The issue is unpaid wages for the Filipino crew.
Infidel Bloggers Alliance wonders about the purpose for deploying the EISENHOWER carrier strike group to the Middle East. (Standard deployment maybe?) See the Navy Press release on the deployment here confirming 'standard deployment'.
WKRN.com Interviews a US Merchant Marine Academy graduate, First Lieutenant Oliver Karp, serving in the Army in Iraq.
Sailors, Mariners & Warriors League has news of the Greek Coast Guard dumping illegal immigrants that they caught attempting to land on a Greek Island into the sea off Turkey, resulting in a number of deaths. How embarrassing for the Secretary-General of the International Maritime Organization, the IMO, Efthimios E. Mitropoulos, who is from Greece.
The Korea Liberator has news of the seizure of the North Korean cargo vessel EWA in Greece, upon discovery of 1.5 million cartons of counterfeit cigarettes. (Who was waiting for the cargo?)
Neptunus Lex points to some of the better sea stories in his archives. One of them covers a trip he made to Finland. His experience sounds normal, although don't get fooled into thinking that the attention he received was due to the uniform alone. (All he needed was to be an American...)
Cdr. Salamander points out a problem with basic training at the US Naval Academy. (It is my understanding that the US Marine Corps only overseas indoctrination at the US Merchant Marine Academy.)
The Raw Story has an update on the PROBO KOALA. Apparently, the vessel was refining crude oil at sea, resulting in the especially toxic waste that was discharged in the Ivory Coast.
Israel Matzov covers the release of the GREGORIO-1 that was seized by Cyprus. The vessel was carrying North Korean radar systems manifested as meteorological equipment which after the seizure was claimed by Syria. I would have expected Israel to board the vessel and destroy the equipment, but apparently that has not happened.
From Haight's Maritime Items:

USCG – passenger ships with unfit survival craft - The US Coast Guard issued a policy letter outlining enforcement action to be taken when its inspectors find passenger ship survival craft (lifeboats or life rafts) damaged or otherwise not fit for service. While the details can get complex, the policy largely provides that the inspector should temporarily reduce the maximum passenger capacity of the ship by the capacity of the unfit survival craft if that craft can not be replaced prior to the next voyage. PCV Policy Letter 06-08 (9/26/06). - Dennis L. Bryant (That is of course unless the flag-state issues a dispensation permitting temporary substitution of a broken lifeboat with life rafts.)

Previous Editions:
Seems that the blog search is not functioning correctly so please check back through the archives for older editions of Maritime Monday, or wait a week and hopefully the search will be working again.
Submission Guidelines:
Look here for more details: Submission Guidelines

You do not have to be the author to submit a blog post or news story. Feel free to suggest something that you think is worth sharing.
Sponsors:
No sponsors for this week. You can sponsor this week's post retroactively. Then again, if you are interested in doing that, then you might consider sponsoring an upcoming post. Check the submission guidelines for more details.
Posted by Fred Fry at Monday, October 09, 2006