Welcome to this USMMA Graduation edition of Maritime Monday.

This Weeks Photo:
Here are two photos from Newsday's coverage of the President's visit to the US Merchant Marine Academy (Many more photos at the Newsday Link). I went to the graduation and it was great. The Man does make an impressive entry. How could you not with half a dozen helicopters landing right behind the stands. You have probably seen the picture of the one graduate hugging the President in the press coverage, (if not, go here) but I would estimate that 50+ graduates hugged him once the first one did it.: 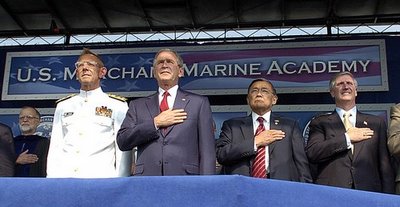 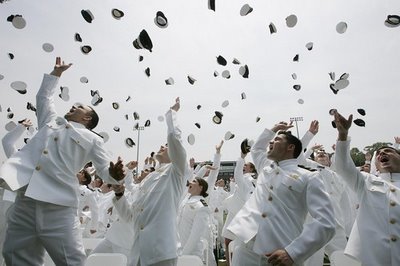 The White House website has the full commencement address of the President at King's Point. Here is an extract:

"Deeds, Not Words" was the hallmark of this Academy in World War II. In the early years of the war, America's efforts to supply our allies in Europe were threatened by the U-boats that were sinking American ships faster than we could build them. The need to arm and defend our merchant ships was urgent, and King Pointers answered the call. One of them was an 18-year-old named Edwin O'Hara, whose statue stands not far from here. In September 1942, Cadet O'Hara was serving on the USS Stephen Hopkins when it came under attack from two Nazi raiders. After the entire gun crew of the Hopkins was killed by enemy fire, O'Hara singlehandedly served and fired the last five shells in the ready box, scoring direct hits on the German warship Stier. Cadet O'Hara was mortally wounded in the action, but not before he helped send the Stier to the bottom of the South Atlantic.

Edwin O'Hara is one of 142 Academy graduates who gave their lives in the second world war. Today Kings Point is still the only one of our five service academies that sends its students into the theaters of war -- and for that reason, it is the only Academy authorized to fly a Battle Standard. (Applause.)

"Deeds, Not Words" was your response on the morning of September the 11th, 2001. From this campus, every man and woman could see the black smoke rising from the Twin Towers. Within hours, your midshipmen were working side-by-side with the Coast Guard and marine division of the New York City Fire Department. Over the next nine days, you moved firefighters and police and emergency response teams into Ground Zero. You moved tons of food and water and supplies. The heroic response to that terrible day showed the spirit of America -- and the spirit of this fine Academy. And I thank you for your service. (Applause.)

"Deeds, Not Words" defines the Academy's role in the global war on terror. Your cadets are forward deployed in the Middle East, where they're supporting operations in Afghanistan and Iraq. Your Global Maritime and Transportation School is providing advanced training in areas from marine engineering to port security for military units like the Navy Seabees and Surface Warfare Officers. And your graduates are serving our nation in every branch of our Armed Services, as sailors projecting American combat power across the Earth; as Marines and soldiers leading platoons from Khandahar to Tikrit; as Coast Guard officers securing our homeland; and as airmen delivering justice to terrorists hiding in safe houses and caves. In the global war on terror, the men and women of this Academy are making a difference on every front -- and the American people are grateful for your service. (Applause.)

The advance of freedom is the calling of our time -- and the men and women of the United States Merchant Marine Academy are answering that call. In a few moments, you'll walk through Vickery Gate and leave the Academy that's been your home. You leave with a bachelor's degree, a license as a Merchant Marine officer, and a commission in one of the branches of our Armed Services. And you leave with something else: The great truth that duty and honor and courage are not just words; they are virtues that sustain a free people, people who are determined to live under self-government. They're the virtues that will be your anchor and compass in a life of purpose and service. These are the virtues that America demands of those entrusted with leading her sons and daughters in uniform. And these are the virtues that America has come to expect from the blue and grey.

We see the devotion to duty and honor and country in the life of one of this Academy's finest graduates, Aaron Seesan. Aaron was an Ohio boy who grew up dreaming of being a soldier. He brought that dream with him to this Academy -- and when he walked through these gates three years ago, he carried on his shoulders the gold bar of a second lieutenant in the United States Army. After entering the Army, Lieutenant Seesan trained as a combat engineer. And he was serving at Fort Lewis, Washington, when a group of soldiers who were based at the fort were struck by a suicide bomb in Iraq. Two of the men were killed. And that's when this young lieutenant volunteered to go to Iraq to take the place of a wounded platoon leader.

When Lieutenant Seesan arrived in Iraq, some of his fellow soldiers wondered what was the Army thinking. His platoon sergeant said, "I didn't know what the hell a Merchant Marine graduate was doing here in the 73rd Engineering Company." The sergeant quickly changed his mind when he saw Lieutenant Seesan in action, taking care of his men as they patrolled the most dangerous roads in and around Mosul. In May 2005, he was leading a routine sweep of a city street when a bomb exploded and hit the fuel tank of his Humvee. Those who were with him recall his last words: "Take charge, Sergeant Arnold, and take care of the others."

He died on May 22 -- on National Maritime Day. For his act of bravery, Lieutenant Seesan was awarded the Bronze Star. And the campus memorial that bears his name will remind all who come here of Kings Point commitment to service above self.

Aaron Seesan gave his life freely. While still in high school, he wrote a poem that now seems prophetic. He wrote, "Mourn not my terrible death, but celebrate my cause in life." Aaron's cause in life was freedom, and as you take your place as officers in our Armed Forces, I ask you to celebrate the freedom for which Aaron fought and died.

America has invested in you, and she has high expectations. My call to you is this: Trust your instincts, and use the skills you were taught here to give back to your nation. Do not be afraid of mistakes; learn from them. Show leadership and character in whatever you do. The world lies before you. I ask you to go forth with faith in America, and confidence in the eternal promise of liberty.

In all that lies ahead, I wish you fair winds and following seas. As I look out at the men and women before me, I will leave here knowing that you will bring honor to our nation, and to this Academy that has prepared you for the challenges you will face. May God steer thee well, Kings Point. And may God bless America. (Applause.) - White House

I learned an important lesson today at the graduation. The press corps walked right by me. I was getting ready to boo them when my mother pointed out that they will just report that I was booing the President. I wonder how many others actually fell into that trap at other events. On the way back to the car, my father gave the 'Bush lied-people died' protestors (all 30 of them) the finger with a smile. He then asked the riot police it was ok. "ABSOLUTELY, it's your right!" was the reply from the friendly officer. Protesting at a graduation, how rude. But in the end, it was all good fun.

After a 5 hour drive, I am now back in DC.
The Huntington County Tab has an interview (2004) with Retired Admiral Carl Seiberlich, who was the first graduate of the US Merchant Marine Academy to achieve flag rank in the US Navy. He was in command of the USS HORNET during the Apollo 11 and 12 moon missions which acted as the recovery vessel. The USS HORNET Museum site has a memoriam page as the good admiral died earlier this year. It's a great read as he was a busy man.
Diesel Duck has coverage of the fire on a new Maersk vessel in the Odense Shipyard in Denmark believed to be the future EMMA MAERSK. It is not obvious but it appears to have been an engine room fire.

EagleSpeak has news of suspicious vessel activity in The Gulf supposedly coming from Iran.

Dusty Doggie has commentary on President Bush's creation of the world's largest marine protected area in the waters off Hawaii.

Divester has news of a settlement for damages from the grounding of the FEDERAL PESCEDORES on a Florida coral reef about two years ago.

Maritime Compass has word of the finding of the USS LEGARO submarine, which was sunk during WWII.
Blogging from sea, Hengineer reminds people to remember merchant mariners as they are taking part in the war on terror.

KI Media has news of cooperation between the US and Cambodia, with Cambodia permitting the US Coast Guard to board cargo vessels flying the Cambodian Flag in the Caribbean in search of illegal drugs.

President Bush establishes Northwestern Hawaiian Islands National Monument - The White House issued a News Release containing the remarks of President Bush as he signed the Proclamation establishing the Northwestern Hawaiian Islands National Monument. This becomes the largest single conservation area in the United States and the largest protected marine area in the world. Plans call for regulations to prohibit the unauthorized passage of ships through waters of the national monument, but it appears that this will be accomplished through action at the IMO. The ecological implications of the Proclamation are discussed in the Press Release from the National Oceanic and Atmospheric Administration (NOAA). (6/15/06).

Eco Geek has news on Japan's continued efforts to bring back commercial Whaling.