Welcome to this week's edition of Maritime Monday.
This Weeks Photo:
Here is an example of port security, as practiced in Singapore. 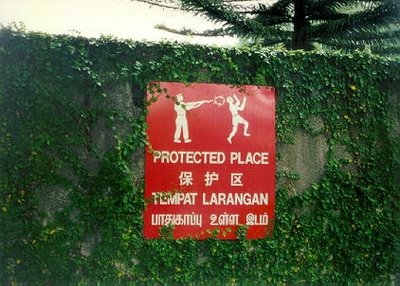 EagleSpeak has an example of NIMBY syndrome concerning an application to build a new LNG Terminal in Baltimore. With many applications submitted to build dozens of new LNG terminals across the US, this is just an appetizer of the backlash to come.

Gregersenblog provides us with a story (part 1) about what happens when the modern transportation marvel of containerization meets up with African red tape and customs. (Go to their homepage and scroll down for the other parts.)

The UK's Daily Mail has coverage of ex-passengers of the SEA PRINCESS who suffered a 'Holiday from Hell' which was suspected to have been struck by a norovirus.

City Stories has the story of a power struggle in Boston between the harbor pilots and the docking masters (docking pilots).

The world's largest international shipping exposition, Posidonia, is happening in Greece from 5-9 June.

President Bush issued a Proclamation designating the week of June 4 through June 10, 2006 as National Oceans Week. Among other things, the oceans enable the transportation of vital goods and provide food and recreation for millions of people. (6/2/06).

The Proclamation refers to the Commission on Ocean Policy, which is located here. On the site is a huge document "An Ocean Blueprint for the 21st Century" full of all sorts of interesting items.

Whisperwave blog has a summary of threats to the Australian Maritime Security. This if from a larger article titled "Future Unknown: The terrorist threat to Australian maritime security" by Australian Strategic Policy Institute.

US Navy Newsstand covers the Seapower for Africa Symposium where a US Admiral addressed the group encouraging regional governments to cooperate on maritime security.

SAILORS, MARINERS & WARRIORS LEAGUE has coverage of the collision between two vessels off Hydra, Greece resulting in the sinking of the vessel HAN.

Common Dreams has the news of the Coast Guard's endorsement of new shipping lanes that should prevent collisions with endangered North Atlantic Right Whales.

Flag-State - The country where the vessel is registered.

IMO was established to adopt legislation. Governments are responsible for implementing it. When a Government accepts an IMO Convention it agrees to make it part of its own national law and to enforce it just like any other law. The flag State is the State of the flag which the vessel flies. In IMO Conventions, the flag State is sometimes referred to as the "Administration". - IMO

Port-State - The country where the port is located.

Port State Control (PSC) is the inspection of foreign ships in national ports to verify that the condition of the ship and its equipment comply with the requirements of international regulations and that the ship is manned and operated in compliance with these rules.

Many of IMO's most important technical conventions contain provisions for ships to be inspected when they visit foreign ports to ensure that they meet IMO requirements.

These inspections were originally intended to be a back up to flag State implementation, but experience has shown that they can be extremely effective, especially if organized on a regional basis. A ship going to a port in one country will normally visit other countries in the region before embarking on its return voyage and it is to everybody's advantage if inspections can be closely co-ordinated. - IMO

The system is set up to keep any one flag-state from being lax on a the rules. So it makes no difference if a country is known as a 'Flag of Convenience' as far as safety concerns goes, because vessels not in complience will eventually be detained (caught) by a port-state inspection.

Port-states often cooperate. The Paris MOU is one such effort. The countries share the inspection records of the vessels inspected in their ports. This allows Europe to inspect a greater number of vessels as ships inspected in one port will not be re-inspected in another port. Countries also have access to the historical inspection data of vessels so they can better plan which incoming vessels to target. Their website is located here. Here is a list of vessels currently detained in Paris MOU ports.