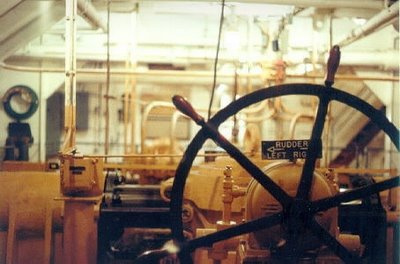 TammyBruce.com has coverage of the USS COLE's return to the front lines. The USS COLE was attacked by terrorists in Yemen on 12 October 2000 killing 17 sailors and severely damaging the vessel. The Coalition of the Swilling has background on Sergeant Cole, the Marine the vessel is named after. The USS COLE's homepage is located here. Google images of the COLE here.

EagleSpeak has news of pirates in Guyana (it's in South America) as well as a gloomy prediction (not his own) concerning piracy in the Mediterranean Sea.

The Cosgriff Informant has the story of the vessel PAULIJING where the seafarers have been stranded for the last six months without pay in Malaysia.

UNHCR has coverage of the rescue of 22 people in the Aegean Sea by Holland America Line's cruise vessel NOORDAM.

Above Top Secret has coverage of the docking of the cargo vessel USS ADVANTAGE in the Ukraine as an excuse for pro-Russia, anti-NATO groups to protest. More information, including a correction of the widely mis-reported "USS ADVANTAGE" to simply SS ADVANTAGE at the Sailors, Mariners & Warriors League. Using Equasis I managed to track down the vessel managers and according to this page (which includes a photo of the vessel) it is the M/V ADVANTAGE.

Helsingin Sanomat has news that Finland's Silja Line is being purchased by Estonia's Tallink.

Christian Science Monitor has the story of US ports consider dredging their ports in order to accommodate the newer, larger container vessels.

The African American Environmentalist Association suggests (they have no 'official' position) that the proposed LNG Terminal at Sparrows Point Maryland) not be build because the terminal will not be owned by African Americans but the terminal will be built in a black neighborhood. It is true that that terminals are almost NEVER built in good neighborhoods. The association fails to recognize the jobs these terminals bring to poor neighborhoods. I do have to say that they have an interesting take on why the facility should or should not be built. They would like to see the terminal owned partly by blacks. I would think that nobody has a problem with that. I would think that an appropriate question to ask is why blacks do not invest in these projects?

Engineering Improvements - An engineer dies and reports to the pearly gates. St. Peter checks his dossier and says, "Ah, you're an engineer you're in the wrong place." So the engineer reports to the gates of hell and is let in. Pretty soon, the engineer gets dissatisfied with the level of comfort in Hell, and starts designing and building improvements. After a while, they've got air conditioning and flush toilets and escalators, and the engineer is a pretty popular guy.

One day God calls Satan up on the telephone and says with a sneer, "So, how's it going down there in hell?" Satan replies, "Hey, things are going great. We've got air conditioning, flush toilets and escalators, and there's no telling what this engineer is going to come up with next." God replies, "What???? You've got an engineer? That's a mistake, he should never have gotten down there; send him up here." Satan says, "No way. I like having an engineer on the staff, and I'm keeping him." God says, "Send him back up here or I'll sue." Satan laughs uproariously and answers, "Yeah, right! And just where are you gonna get a lawyer?"
Feel free to submit your favorite sailor joke.

Weekly Maritime Reference:
Check out the following Powerpoint Presentation on Chart Projections and Numbering. (Suggestion, right click the link on the course page and save to your desktop to view. Requires Powerpoint.)

Thanks for the link, Fred! (That Sgt. Cole, he was a live wire of a bugler, wasn't he?)