I was driving back from Long Island to DC and as I drove I was looking to see how far I could get before seeing a Kerry bumper sticker. Each trip I seem to get farther south. This time the first Kerry sticker was spotted in Delaware. They seem to be extinct in Long Island, which is probably the normal result seeing that the elections were last year and the guy did lose. (And what remains of the man’s image is s shell of what it was when he “Reported for Duty” not that it was much, especially for non-Democrats.)

One bumper sticker almost put me in shock. It was a OBAMA 2008 sticker. Was this owner of this car serious? I went to pass the car and the driver appeared to be a normal middle-class white guy in his late thirties. Did someone put this sticker on the car without his knowledge? I doubt it as he also had a “Sorry World” sticker on it. I was in a slight state of shock for the rest of the trip, that people could actually be serious about putting Obama out there as a serious Presidential candidate.

Back at home I tried “Obama 2008” in Google and came up with a multitude of sites covering the idea and even more sites selling Obama 2008 gear. I must say that I am taken aback. I try to stay on top of things going on in both parties, but I would not dream that after the last loss, that people would suggest Obama as a Presidential candidate. After all, this is the Senator who recently commented that he believed that Lincoln would have thought of a black man being elected to the Senate as “ironic” while questioning Lincoln’s role as the “Great Emancipator.”

Well I have questions for Mr. Obama; If Lincoln was not the Great Emancipator, then who was? What do you think of the role of the Democratic Party during the Civil War which included the following:

“few Democrats believed the emancipation of the slaves was worth shedding Northern blood. Indeed, opposition to emancipation had long been party policy. In 1862, for example, virtually every Democrat in Congress voted against eliminating slavery in the District of Columbia and prohibiting it in the territories.”

As it so happens, during the war, Obama’s own State Legislature passed a law calling for peace with the south. There was a name for these Civil War democrats. They were called Peace Democrats:

A quick summary can be found at: u-s-history.com

Peace Democrats.
Many Democrats within this group hoped that the Union could be salvaged, but felt that military means were not justified. This faction asserted the following:
- The North was responsible for pushing the South into secession
- The Republicans were committed to establishing racial equality, a prospect opposed by many working class immigrants who wanted to protect their low-paying jobs and by racists
- Lincoln had become a tyrant and was bent upon destroying civil liberties
- The war was a national tragedy and must be ended, even if that meant granting independence to the Confederacy.

Funny thing about the points above is that (with minimum editing) they perfectly describe the actions of the Democratic Party today.

I think if Senator Obama is interested in commenting on our Country’s Great Leaders, perhaps he can start with criticizing those who were in his own party first. I don't know, perhaps this is a cruel joke. Perhaps the Democrats are being smart this time and are flushing out those who will poison their own wells well before the serious race starts. After all, just imagine the Monday morning quarterbacking after an Obama Presidential run. Not pretty. 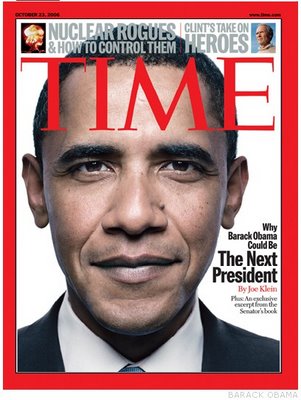 So, the Democrats seem to have a vacuum where their 2008 candidates should be. That combined with Obama playing it safe and sane, which seems to be turning him into a viable candidate.

First-term Senator Barack Obama has the charisma and the ambition to run for President. But, as JOE KLEIN reports from the campaign trail, he's not quite ready to answer the tough questions. - Time

Since when has not being able to answer tough questions stop a run for President? Could it be that he is not looking to just feed people BS? It's probably all academic as the chances of the Democrat Party backing him as a candidate in 2008 is pretty slim. There are others in line who will want a chance first. However, if he can do well in Iowa, like Kerry, then perhaps the other states will jump on the electability bandwagon. That might have more to do with who the Republicans put forward as their candidate.
I still think this early Obama talk is meant to burn out any chance he might have for 2008.
As for the tough questions, perhaps Mr. Obama can work up some answers for these:

Lincoln is not the Republican party of today. He wasn't the Republican party of his day, either. Weren't many other Republicans much more eager about the emancipation than he was? Hasn't Obama if anyone right to criticize Lincoln since he is the senator from Illinois? Isn't it normal that politicians have lots of opinions about the great figures of the past who happened to be from their own state? The Civil War democrats of Illinois didn't produce a leader who would be remembered today and still influence the voting patterns of today. That doesn't mean Obama can't become a future President. Is he really so much different from a Clinton or a Bush, except that he is not white?

My intention was not to measure the eagerness of anyone to free the slaves at the time.

Anyone can criticize anyone in America. However, there might be a price for what you say, especially if you have plans to run for the White House.

I would prefer to see the Democrats present a serious candidate. Someone where in the end I would not care if a Democrat or Republican won. I am more interested in the best person winning. This was completely lacking from the Democrats in the last election. I watched the Democratic Debates and I was shocked that Rev. Sharpton was one of the best debaters (along with Lieberman.) Kerry was a loser from the start.

Obama might run for president, but there is no way that he can win. This is not to be confused with saying that a black candidate cannot win. I think that the right one can, but I think he or she will come from the right, not the left.

I think the "true" great emanipater was Dr M.L.King,Jr. I further postulate that the clearest emancipators were the authors of the Constitution and Declaration of Independence. I mean, "all the people" does mean "all people" right?
It is my belief, from weighing the evidence, that the idea that Mr Lincoln would be a hazard to his handlers, actually began when he decided to free the slaves. Then, as Mr Lincoln had written in notes, he referred to planned future acts of completely ridding America of Tobacco & Alcohol. To this end, Mr Lincoln had serious motives for changing the face of America, for the better. These did, (and in my opinion, still do) "enslave" the uninformed masses. King Tobacco and King Alcohol could not stand for this. And we know what happened then.
I believe that America needs a liberal, and I believe that America is in a constant flux of change. America is a living, breathing being, and change is inevitable, although such change is not without cost.

I may not live to see a black american as leader of the free world, but what a true irony, a black man, (most likely a slave just 150 years ago) representing the free world. I may not live to see a woman president, (not even able to vote 100 years ago), but change is inevitable. I can see something happening to our world, and that is a coming of a governing body, which, like it prophesies on the back of our $1 note, "Novus Ordo Seclorum"!
I personally don't think that a one world government would be all that bad... or world peace either!
(Just my 2 cents worth)

When President Lincoln became "The Great Emancipator" he was part of the Union Party, not Republican.

Hmmm. Union Party, what was that:

"At one point in summer 1864 pessimists warned that defeat in the November elections appeared likely. Lincoln ran under the Union party banner, composed of War Democrats and Republicans."

I have to say that I was not aware of that. But the anonymous commentor was being deceptive in thinking that Lincoln was no longer a Republican. There was no separate Republican candidate.

"The Democratic Party was bitterly split, the Union party was united and energized, and Lincoln was easily reelected."

I wonder, is this a sign of what is to become of the Democrat Party for the 2008 election? No, that's probably too early. When they lose in 2008, that will setup the Dems for all-out caos for 2012.