Dealing with Pirates - Russia Makes them Walk the Plank

One of the unresolved issues with dealing with the pirate problem off Somalia is what do you do with pirates that you capture?

Kenya has stood up and offered to try pirates in their courts. However, as a result their court system is now trying to deal with over 100 pirates captured at sea and deposited on their shores and now they are resisting the pressure to accept more of them.

A number of pirates have been simply released, either back ashore or back to their boats, after being disarmed of any weapons that they didn't already throw overboard themselves prior to capture.

The Russians have come up with a nastier version of this tactic, basically abandoning the pirates far at sea with only the most basic of supplies. Oddly enough, they did want to prosecute the pirates back in Russia, but abandoned that idea because the ship's crew of the attacked vessel, were not able to directly identify the pirates, given that they were holed up in a secure room, unable to negate the pirate claims that they too were victims of other pirates who got away.

RUSSIA has freed a group of suspected pirates captured when its navy stormed a hijacked tanker in the Indian Ocean.

One pirate was killed and 10 suspects seized when marines from the destroyer Marshal Shaposhnikov recaptured the 106,474dwt Moscow University yesterday, a day after it was seized.

The detainees were expected to be tried in Russia. But after a day of contradictory public announcements and debate among prosecutors, military officers and the Kremlin, the navy was ordered to cast the suspected pirates adrift.

Their release took place after a source at the defence ministry announced: "Unfortunately … legal rules for the prosecution of pirates operating in Somalia did not exist, and thus they [the suspects] do not fall under the jurisdiction of any state and international law.”

Defence ministry spokesman Colonel Alexei Kuznetsov later said the release was required “due to the imperfection of the international legal framework”.

There were no witnesses to substantiate the identities and actions of the suspects because the tanker’s 23 Russian crew members had secured themselves in a safe-room.

And after they were captured, the suspects reportedly claimed that they were not pirates but rather hostages of the real attackers.

In June, the chief Russian prosecutor in charge of piracy, Alexander Zvyagintsev, told Fairplay that Russian law clearly allows for military action against pirates, but it was less clear what could be done if pirates were captured.

“The problem of what to do with the pirates who have been arrested remains undecided for the majority of countries,” he explained. “That adds to the confidence of the pirates that they can go on acting with impunity.” - Fairplay News

Not mentioned in the article is that apparently the Russians stripped the boat of any navigational equipment before setting them free with a tank of fuel. There are also apparently concerns in the media that the Russians simply did away with the pirates and provided this cover story, all because there were no press to witness the freeing of the pirates. Personally, I do not believe that the Russian Navy would do such a thing, given that what they had admitted to doing already gives the pirates a poor chance of survival. And I do not blame the Russians for not inviting the press to document this form of punishment. Actually, I would hope that they marked the sides of the vessel with 'DANGER - PIRATES' so as to warn passing ships of the risk of assisting them. One thing is for sure, pirates will not mess around with the Russians once word gets out about what happened to their fellow bandits.
Question is, is this a solution that other Navies can employ? The EU has been targeting motherships. The effect is similar for any pirates at sea dependent on those captured motherships for fuel and food. Going after supply lines is a classic military strategy. However, those at the end of a disrupted supply line at sea are as doomed as the pirates the Russians 'freed' at sea. The only difference is that the Russians caught them and then let them go.

Here is the latest news noting that the pirates did not appear to have gotten very far:

Freed Pirates May Have Drowned

Ten pirates released from a Russian warship 300 miles out to sea may have drowned, according to Russian officials and colleagues of the pirates, raising fears of retaliation against other vessels plying East African waters.

The pirates were captured last week after they hijacked the Moscow University, a Liberian-flagged, Russian-operated oil tanker sailing off the Somali coast. A Russian warship came to the ship’s rescue and apprehended the pirates. But after determining it would be too difficult to obtain a conviction, Russian officials said that they dropped plans to take the pirates to Moscow for trial.

Instead, like many other warships that have intercepted pirate skiffs, the Russian marines released the pirates — but not before removing weapons and navigation equipment from the boat several hundred miles from shore. Russian officials gave no explanation for removing the navigation equipment.

Fellow pirates in Somalia also said they lost contact with the boat after their separation from the Russian warship. “We will hold Russia responsible if any harm comes to them,” said a pirate commander, Abdi Dhagaweyne, in a telephone interview. “I’m not sure of their safety now because we have since lost contact.” – Wall Street Journal

Here is a photo of the capture: 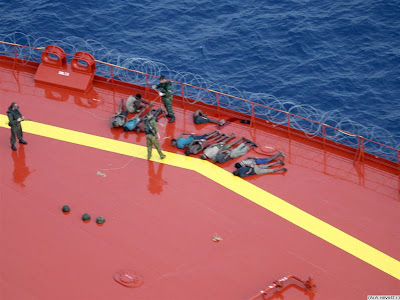 I'm surprised they didn't push him over the side.