Welcome to the first week of what I hope is a long-running Maritime Carnival.

First up is the picture of the week, which is actually a video:

This is a time-lapse video of one week at the Panama Canal condensed into an 11 minute video. If the video is not working, you can view it here.

I am pleasantly surprised that there are submissions already for the first week. Here they are both submitted and 'found' posts:
This Weeks Submissions:
From the website of the US Coast Guard come a couple of stories about Port Security operations in the Persian Gulf. Most people are not aware that the Us Coast Guard operates overseas in wartime. The first story s the most interesting, describing the situation of guarding Iraq's two offshore oil platforms, which was described as right out of Waterworld.

From the Heritage Foundation, we have Port Security: Four Examples of What Not To Do.

The furor over the proposed sale of a London-based firm that operates facilities at some U.S. ports to a company in the United Arab Emirates has focused Congress’s attention on the issue of maritime security. The U.S. part of this deal appears to be dead, but real dangers remain—specifically, that Congress will implement policies that will not make Americans safer and could actually harm U.S. interests. There are at least four bad proposals on the table that Congress should reject. (Continue)

From the Strategy Page we have: A Major Victory for Al Qaeda, a good summary of acts done by the UAE that put them firmly in the ally column. It is just a pity that it is our own Congress that hands Al Qaeda a victory against one of our allies.
From Spank that Donkey we have Scratch Two Flat Tops !!!! the US Navy currently operates 12 aircraft carriers. Seems that some in the Pentagon are toying with the idea of cutting that number back to 10. Is ten enough? Is twelve too many? Read to find out
Speaking of carriers, the USS Ronald Reagan is making a port call in (of all places) Jebel Ali, in the United Arab Emirates. Perhaps Congress forgot to tell the Navy how dangerous that country is.
SAILORS, MARINERS & WARRIORS LEAGUE has coverage of a Sailor Beaten To Death On Oil Tanker Over Prophet Mohammed Cartoons.
Eaglespeak takes the press to task with Headline fun with "pirates" pointing out what was reported does not reflect the true story, with their own stories contradicting the headline. (kind of like calling a person with a mask and a gun inside a bank a 'suspected' bank robber. )
Maritime expert Cargolaw has complete photo coverage of the grounding of the Containership M/V APL PANAMA, a 'Cargo Nightmare Prize Contender' here. The story includes pictures of offloading the ship BY HELECOPTER. There are lots of other maritime accidents documented on this site. 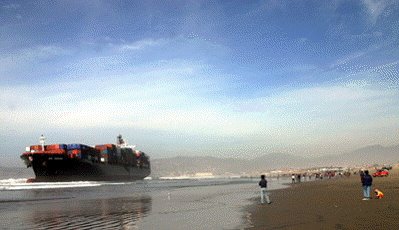 (Wow, that sucks!)
Weekly Maritime Reference:
One reference book all Navigational Officers are familiar with is the American Practical Navigator.

The American Practical Navigator (Pub 9) is a publication which describes the modern principles of marine navigation and includes the formulas, tables, data and instructions required by navigators to perform the computations associated with dead reckoning, piloting, and celestial navigation. The publication also contains sections addressing the Practice of Navigation, Navigational Safety, Oceanography, Weather, and Electronic Navigation. It is prepared and published by NGA on a five-year program. This publication is available in its entirety on the website. A Marine Navigation Calculator function is also available on the website which performs many of the navigational computations derived from formulas and data found within this publication's text and tables.

So lets take a word out of the Glossary:

green flash. . A brilliant green coloring of the upper edge of the sun as it appears at sunrise or disappears at sunset when there is a clear, distinct horizon. It is due to refraction by the atmosphere, which disperses the first (or last) spot of light into a spectrum and causes the colors to appear (or disappear) in the order of refrangibility. The green is bent more than red or yellow and hence is visible sooner at sunrise and later at sunset.

Bridge watches (at least those I was a part of) would look at sunset to see if there is going to be a green flash. I have to say that it is pretty cool to see the upper edge of the sun turn green right before disappearing below the horizon. It is also possible that there is a green flash in the morning but it is a little more challenging to see it as you can't see the sun beforehand to get an idea when/where to look.

A special thanks goes out to 'Cannoneer No. 4'.