I start this week with a confession. This weeks carnival had no submissions. With that in mind, I have removed 'Carnival' from the title, and instead I am proud to present this week's edition of Maritime Monday. This week contains links to blog post found that I think you might find interesting. 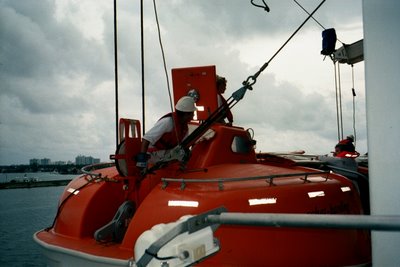 All the Cruise Vessel mishaps this week reminded me of a Survival Craft exam I gave in Miami in 2001. It is not regular work for me. I was asked if I could fly down at the last minute as the regular inspector was not available. I am not one to say no when I get a chance to take a lifeboat (survival craft) for a spin.

It was a group test, the students working together, and in the end they all passed save one. The group being tested was hotel staff. You see, there are so many lifeboats on a cruise ship, that there is not enough seafarers to mann all the positions. So the hotel staff is called upon to mann some of the positions. At the start of the exam, the Chief Mate was a little too involved in the exam as a coach, so I stopped the exam for a minute and proclaimed the Chief Mate 'dead'. They managed to do fine without him. (Photo by Mrs. Fred.)

The Estrogenius Radio Blog has a post about Rogue Waves.

EagleSpeak has coverage of a truly impressive eplosion that took place on the HYUNDAI FORTUNE. More coverage of this incident at Cargolaw.

The Monitor has coverage about the sinking of the Canadian Ferry QUEEN OF THE NORTH in British Columbia. More coverage of the sinking at The Galloping Beaver including an estimated position of sinking.

Sailors, Mariners & Warriors League cover another 'North' vessel (no relation) in trouble where the EMPRESS OF THE NORTH, a sternwheeler cruise vessel has run aground in the Columbia River. Oddly enough, the passengers abandoned ship directly onto another sternwheeler, the QUEEN OF THE WEST.

Gates of Vienna has a post covering the well-publicised P&O STAR PRINCESS fire. If one cigarette can cause all that damage. Imagine what a pack of cigarettes in the hand of a terrorist can do...

Fires, sinking, and running aground are not the only dangers of going to sea. Cruise Junkie has a running list of Persons Overboard from 1995-2006. They also have a list of all sorts of events that happen to and on cruise vessels.

Blue Mountains Union News has a story about longshoremen on the guard against foreign-flag cargo ships taking cargo containers destined for other Australian ports, which should be carried only by Australian-flag vessels.

Sake Light has a post about Piracy in International Waters and the role of the US Navy.

Admiralty, Boating, and Maritime Law Podcasts has this video of a collission between a Greenpeace vessel and a Japanese whale 'research' vessel. (No comment concerning Greenpeace's actions for the moment.)

An ocean marine loss that occurs through the voluntary sacrifice of a part of the vessel or cargo, or an expenditure, to safeguard the vessel and its remaining cargo from a common peril. If the sacrifice is successful, all interests at risk contribute to the loss borne by owner of the sacrificed property based on their respective saved values.

Basically, there is an accident on the vessel and in trying to save the vessel, cargo is jettison or somehow damaged or destroyed in the process of saving the ship. Like water damage from fighting a fire. Or tossing cargo over the side to get access to a damaged part of the ship or the cargo causing the distress. The actions were successful in that the ship is saved. However, not all of the cargo owners are getting their cargo. As their loss resulted in the other cargo-owners getting their cargo, those cargo owners must compensate the ship and other cargo owners for their loss, essentially all lose equally.

Thanks for the mention. You should check our CDR Salamander, he's has a pretty notorious naval hobby. Given that he is not only a current US Navy Commander, but has an interest in historical naval history as well.

I was checking my post, so that I can repost the permalink at neo neo con's site, which was talking about piracy. In doing that, I saw your trackback.

Interesting blog. I was in Miami before a year thorough last minute travel. I liked this place, the restaurants and the night life.