This all started when I saw this image and related post 'Tax cheats cost you £1,150 a year' on the website Tax Research UK: 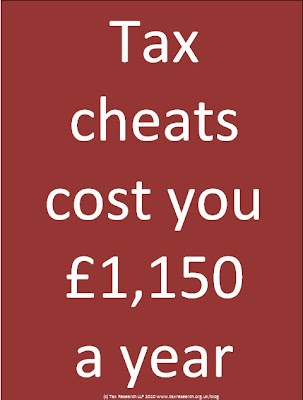 This made me wonder, just how much revenue does the UK take in per person? Nicely enough, another post on the website links to their report 'Tax Justice and Jobs: The business case for investing in staff at HM Revenue & Customs' (Link to PDF Report) which provides a link to the UK's Revenue statistics. The total tax revenue estimated for the 2009-2010 tax year is 397 Billion British Pounds. (http://www.hmrc.gov.uk/stats/tax_receipts/table1-2.xls)
Now take the total population of the UK:

The estimated resident population of the UK was 61,383,000 in mid-2008, up by 408,000 on the previous year. Children aged under 16 represented around one in five of the total population, around the same proportion as those of retirement age. In mid-2008 the average age of the population was 39 years, up from 37 in 1998. - Office of National Statistics, UK

Where taxpayers money is spent 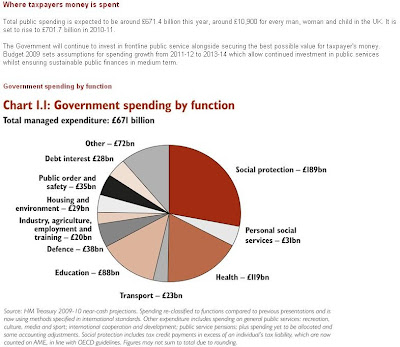 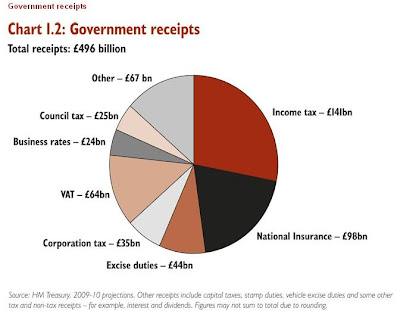 The issue here is that UK spending has gotten to a point that the majority of the population is unable to provide the Government with their fair share of the bill, and by 'fair share' I mean about 10,900 Pounds in taxes/Revenue to the Government.
So back to that claim above that 'Tax cheats cost you £1,150 a year'. Given the numbers above, the real thief in all this is the UK Government, spending well more that it's population, including the tax cheats, can afford to pay.
As for the United States, we are no better. See my earlier post 'Obama's 2010 Budget Spends Almost $12,000 Per American!'

At $3.59 Trillion, the Government will be spending around $11,970 per American (Given 300 million Americans). That comes out to Government spending of $47,900 for a family of four.
This is an impossible spending figure for the country to sustain. Hell, it will take years, most likely decades of taxation just to pay this one year's deficit back.

Think of buying a car for that amount of money. You would be looking at a five or seven year loan. Most all sensible families would opt for a more fiscally responsible alternative. Now picture buying and trying to pay off a car that costs $45,000 every year! This is the kind of debt that the Obama Administration is burdening families with.
This story gets worse:

The new White House figures bring the deficit estimates closer in line with the non-partisan Congressional Budget Office, which has forecast a $1.85 trillion deficit this year and $1.38 trillion in fiscal 2010. - Yahoo News

I have a senior management position in a company that employs over 100 people. Looking at my own tax bill for 2008, I am guessing that the senior management's tax payments is nowhere near to covering the gap between what the staff is paying in taxes and what the Government is spending.
Now remember that half of the population pays no taxes. That means that the amounts need to be doubled for the half that does! - Link

So when a politician/leftist berates you that cutting taxes will kill children or make angels cry, Tell them that you already gave $40,000 of your family's share of the budget and if they couldn't save the children with that amount that they can't be the right person to spend any more.

Pre-Posting Update:
As I proof this article for posting I come across this example of abuse of the system in the UK. Keep in mind the statement above that 'Tax Cheats cost you 1,150 a year'.

Why work when I can get £42,000 in benefits a year AND drive a Mercedes?
By Paul Sims

Father-of-seven Peter gave up work because he could make more living on benefits.

Yet he and his wife Claire are still not happy with their lot.

With an eighth child on the way, they are demanding a bigger house, courtesy of the taxpayer.
More on the way: The Davey family at home

'It's really hard,' said Mrs Davey, 29, who is seven months pregnant. 'We can't afford holidays and I don't want my kids living on a council estate and struggling like I have.

'The price of living is going up but benefits are going down. My carer's allowance is only going up by 80p this year and petrol is so expensive now, I'm worried how we'll cope.

Mrs Davey has never had a full-time job while her 35-year-old husband gave up his post in administration nine years ago after realising they would be better off living off the state.

At their semi on the Isle of Anglesey, the family have a 42in flatscreen television in the living room with Sky TV at £50 a month, a Wii games console, three Nintendo DS machines and a computer - not to mention four mobile phones.

With their income of more than £42,000 a year, they run an 11-seater minibus and the seven-seat automatic Mercedes.

But according to the Daveys they have nothing to be thankful for.

'It doesn't bother me that taxpayers are paying for me to have a large family,' added Mrs Davey.

'We couldn't afford to care for our children without benefits, but as long as they have everything they need, I don't think I'm selfish.

'Most of the parents at our kids' school are on benefits.'

She added: 'I don't feel bad about being subsidised by people who are working. I'm just working with the system that's there. - Daily Mail, UK

Go read the whole story because the sheer sense of entitlement is amazing. You can bet that this family is not the only one sucking off the system. And leftists are demanding that Governments raise taxes on self-supportive people to support deadbeats. That's right, the Davey family are deadbeats and as far as I am concerned the aid should stop for them and they should be thrown on the street to fend for themselves. If that is too cruel, use the tax money that they are destroying and use it to support an entire village somewhere.