What Happened To The Democrat Party?

There was a time where the Democrats were living in their glory. From what I can gather, it's high-point was during John F. Kennedy's Inauguration Address where he said:

In the long history of the world, only a few generations have been granted the role of defending freedom in its hour of maximum danger. I do not shrink from this responsibility—I welcome it. I do not believe that any of us would exchange places with any other people or any other generation. The energy, the faith, the devotion which we bring to this endeavor will light our country and all who serve it—and the glow from that fire can truly light the world.
And so, my fellow Americans: ask not what your country can do for you—ask what you can do for your country.
My fellow citizens of the world: ask not what America will do for you, but what together we can do for the freedom of man.
Finally, whether you are citizens of America or citizens of the world, ask of us the same high standards of strength and sacrifice which we ask of you. With a good conscience our only sure reward, with history the final judge of our deeds, let us go forth to lead the land we love, asking His blessing and His help, but knowing that here on earth God's work must truly be our own. - John F. Kennedy, Inaugural Address

Link: Ask Not What Your Country Can Do For You! - YouTube

This was not a message of take, but one of giving. I just have to wonder, just what happened to the Democrats, where they have turned into a machine, showering aid and support on people who do little to get themselves out of welfare and whose Government does little to encourage them to try and better themselves, instead telling them that nothing is their fault. Worse, they fight against any attempts to ensure that those receiving aid are not abusing the system, which has the effect of growing the number of people who are dependent on Government assistance while doing little to get people off of aid program.
This is most likely some sort of evil act to keep people down and poor so that they continue to vote for the very Democrats who are keeping them poor. After all, who is better at giving to the poor? With that in mind, all you ever hear from Democrats concerning Domestic programs is how they intend to give more to people, in exchange for votes, mainly by taking more from people who actually manage to support themselves.
Talking about giving your money away, take at look at the financial crime of a Farm Bill that Congress is getting ready to unload on America:

The USDA reports that if crop prices fall from these highs to their norm over the next five years, farm payments will surge. For example, if corn prices return to $3.25 a bushel from today's $6, farmers would get $10 billion a year in support payments. If bean prices fall to their norm, they'd get $4 billion. Thus, if farm prices stay high, consumers face higher grocery bills and farmers get rich. If farm prices fall, taxpayers kick in the difference and farmers still get rich.
Sugar producers also make out like Beltway bandits, receiving the difference between the world price of sugar, which is now $12 per pound, and the guaranteed price of about $21 per pound. That's a roughly 75% subsidy for already wealthy cane growers and a nice payoff for the $3 million they contribute to House candidates each year.
All of this is a status quo that both political parties can believe in. More than a few liberal Democrats are privately embarrassed by this corporate welfare spectacle. But they've been mollified by Speaker Pelosi, who spent the last week assuring her left that the bill also includes another $10.4 billion for food stamps and nutrition programs. This entitlement expansion comes only days after the Congressional Budget Office reported that paying the bills for existing entitlements could require tax rates to climb to 80% in the future. - WSJ

To show just how much of a joke Congress is, at the same time that they are passing this multi-billion dollar giveaway to farmers, they are grilling oil companies over why gasoline is so expensive. All this while they continue to ban oil drilling from much off offshore America and Alaska. Why? Well, by making farm products and gas much more expensive, their actions will help prevent Democrat voters from becoming more self-sufficient and being temped to vote against democrats once they get to a point where they actually have to start to pay taxes to give to the rest of the people they just left behind. As a bonus, they get to drag down a couple of Republican supporters in the process as well.
It seems that I am not the only who has noticed the downfall of the Democrat party. This week's Wall Street Journal has an editorial also asking what happened to the backbone of the Democrat party, especially when it comes to foreign policy:

How did the Democratic Party get here? How did the party of Franklin Roosevelt, Harry Truman and John F. Kennedy drift so far from the foreign policy and national security principles and policies that were at the core of its identity and its purpose? - WSJ

From Roosevelt to John Kerry and Barack Obama. There has been lots of talk about the Republicans needing to get back to their roots. That can be said too about the Democrats. Sure, their roots have big problems as well, but moving back to the party of the late 30's and 40's would be a big step forward for them and the country. The Democrat party today is a sham and after this next election is going to suffer a crippling case of McCain Derangement Syndrome coupled with a repeat case of P.ost E.ection S.election T.rauma. I would say that this is what the Democrats need, but it seems that they as a group are really starting to enjoy the pain!
Democrats and Our Enemies - Wall Street Journal 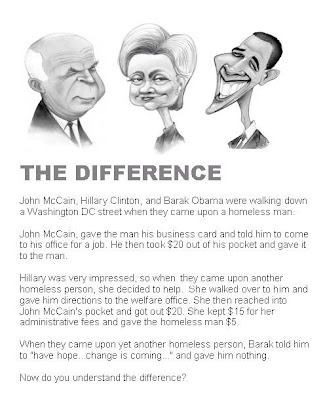