Today is National Maritime Day. I took the family for a tour of the NS SAVANNAH which is currently up in Baltimore. 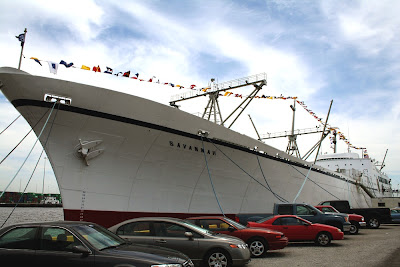 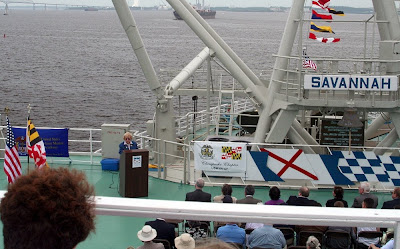 Also in attendance at the program was the US Merchant Marine Academy's Training Vessel LIBERATOR: 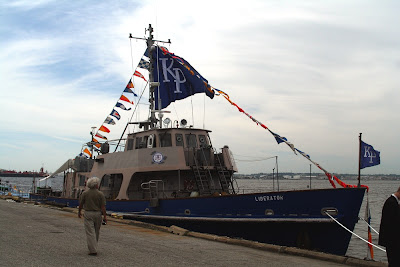 You can find more on the NS SAVANNAH on Wikipedia here. The ship was the world's first Nuclear-Powered Cargo Ship.
Here is the President's National Maritime Day Proclamation:

Americans have long looked to the sea as a source of security and prosperity. Bounded by two oceans and the Gulf of Mexico, and criss-crossed by a myriad of inland waterways, America's destiny as a maritime nation was a story foretold.
The Merchant Marine took up arms alongside the Continental Navy to help defeat the British Navy during the American Revolution. Since then, they have served bravely as the United States has faced threats ranging from war to piracy, and our seafaring fleet has proven instrumental in protecting our safety. In times of conflict and crisis, the Armed Forces rely on the Merchant Marine's sealift capability to transport critical equipment and supplies. Time and again, mariners have demonstrated their willingness and ability to meet daunting challenges.
Waterways have also enabled much of the commerce that has expanded America's economy. Domestic and international commerce occurred along rivers and coasts even before our Nation's birth. Great cities have sprouted near waterways, and maritime activity remains crucial to our economy today.
The men and women of the U.S. Merchant Marine and the many other workers who have supported the maritime industry have made significant contributions to our leadership in the global marketplace, and to our security.
On this National Maritime Day, we also mark the opening of a permanent exhibition at the Smithsonian Institution, "On the Water." It demonstrates the importance of the maritime industry and chronicles our history as a maritime nation.
The Congress, by a joint resolution approved May 20, 1933, has designated May 22 of each year as "National Maritime Day" and has authorized and requested the President to issue annually a proclamation calling for its appropriate observance.
NOW, THEREFORE, I, BARACK OBAMA, President of the United States of America, do hereby proclaim May 22, 2009, as National Maritime Day. I call upon the people of the United States to mark this observance by honoring the service of merchant mariners and by displaying the flag of the United States at their homes and in their communities. I also request that all ships sailing under the American flag dress ship on that day.
IN WITNESS WHEREOF, I have hereunto set my hand this
twentieth day of May, in the year of our Lord two thousand nine, and of the Independence of the United States of America the two hundred and thirty-third.
BARACK OBAMA - White House 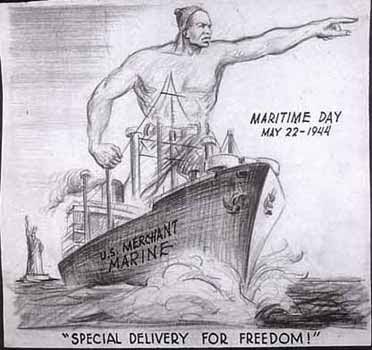