Last week's ILWU strike of US West Coast Ports reminded me of my uncle's Merchant Mariner Document. You see, there has been a longstanding issue of securing ships and ports from domestic enemies, such as communist sympathizers. So, some ships needed for the war effort required that seafarers be "Validated for Emergency Service". 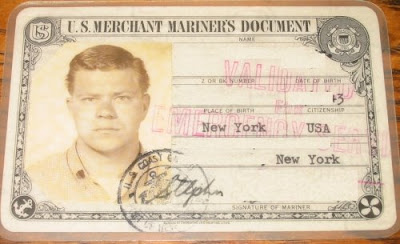 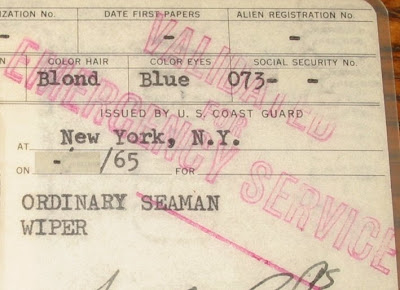 Here is a short summary I found on how this vetting worked:

The Coast Guard adopted separate but similar procedures for the seagoing trades and waterfront employees. Since seagoing personnel already were required to hold a federal license of certificate, the regulations provided a method for stamping these documents "validated for emergency service." The normal validation procedure required the seaman to apply at any Coast Guard Marine Inspection office. The office would forward the application to the Commandant in Washington, where it was checked against the files to see if it disclosed derogatory information about the applicant. The Coast Guard did not employ its own investigators in this program, nor did it attempt to verify information that may have been reported by other agencies. The Marine Inspection officer was then notified of the Coast Guard's decision and either prepared validated documents or a form letter of rejection. While awaiting clearance, the applicant could not sail in any restricted ship unless he could get a "trip letter" from the local Coast Guard Marine Inspection office. - U.S. Naval Institute

So it seemed a good time to share this old Z Card.
--------------------
There have been some comments that most of the longshoremen who were striking last week really could care less about the proclaimed reason for the strike, which was to display opposition to the war in Iraq, but I wonder how true that is, especially after seeing these photos today of ILWU workers marching. Scary aren't they? (Not for anything, but it seems that all the clowns were there: Cindy Sheehan, Danny Glover, Cynthia McKinney. Their photos here.)
Anyway, don't let this call for peace from the ILWU fool you. They have protested against peace before as well.

Bridges (Note: Head of the ILWU) had "not only been a secret party member but served on the CPUSA national Central Committee under a pseudonym," according to research conducted in recent years at the Comintern archives in Moscow.[1] Nonetheless, the United States government lost every effort it made to deport Bridges, revoke his naturalization, or prosecute him for denying that he was a member. The CIO, on the other hand, did not consider itself bound by the decisions of the courts or administrative agencies on this issue; after Bridges came out, along with other CP-allied labor leaders, against the Marshall Plan and for Henry Wallace's presidential campaign, the CIO expelled the ILWU in 1950 for being dominated by communists. - Wikipedia

These idiots have also been pro-war as well, at least as long as the Soviet Union was threatened:

Bridges soon took the union in a wholly different direction after Hitler attacked the Soviet Union in June 1941. Having opposed the United States' entry into the war, Bridges now urged employers to increase productivity in order to prepare for war. - Wikipedia

I almost ended up on the West Coast for work. While out there for an interview, I visited with some friends who were working in the Port of Los Angeles. They told me about how I had it easy working in Charleston because there was no ILWU there. They then gave me a couple examples of union demands and oddities including telling me about the 'ILWU ice cream truck'. No, they don't get free ice cream. It was their nickname for the union rep truck because whenever it appeared the longshoremen acted like kids do when the ice cream man shows up. Apparently in these cases, their excitement is due to knowing that the job was about to be closed down/delayed by the rep, providing them with some break time. Luckily for me, as I was flying to the West Coast, my company was announcing that they were merging with another line. So by the time I got to my interview, the regional head didn't know if the job I was interviewing for would be around after the merger, which was excuse enough for me not to take it. Good thing too.