When you hear the word smuggling, you tend to think of drugs, alcohol, cigarettes or even people being moved into a country illegally.
Many countries have to deal with smuggling to a certain degree. The United States has to deal with huge drug smuggling operations. This has resulted in a large prison population consisting mostly of end-users. Europe's 'cultured' opinion has been that this problem is of America's own creation; the result of 'draconian' drug laws. A problem that would simply go away if the US legalized drug use.
The same can be said for similar problems in Europe. While they mostly go soft on drug users and the illegal activities that go on to supply them, they are pretty determined to hunt those who try to get around the high taxes they have imposed on all things legal. Lets just call it revenue-based law enforcement. They have their job cut out for them since Europe's high taxes combined with an elimination of tax-free sales had spurred one huge continent-wide smuggling operation.
The high taxes are levied on the population in order to provide world-famous, 'cradle-to-grave' social welfare. The populations of these high-tax countries are all in favor of it, so they say. However, they also take advantage of any opportunity to buy something tax-free when overseas or at a discount in another EU country if it is cheaper than in their own. By doing so, they are cheating the system that they approve of. In effect, reducing the amount of taxes that they pay, and forcing others to make up the difference. This may result in even higher taxes, or a reduction in services provided. (Sometimes it results in both!)
For example, there is a ferry route from Helsinki to Stockholm. There are at least two departures each evening from each city. These connections are sustainable only because the ships are able to offer tax-free shopping, thanks to a quick pitstop in Mariehamn. (Just long enough to lower and raise the stern ramp and handle the couple pieces of rolling cargo.) The large number of ferries plying this route, is largely due to the attraction of tax-free shopping while on the vessel and the high prices ashore. It is easy to spot those who have returned from a cruise in the morning, as they are the ones downtown with cases of beer strapped to their luggage trolleys.
Sometimes, there is no legal alternative to get around the high taxes. This leads us to criminal activity; turning people into criminals. Take the case of Norway and it's high taxes. The taxes have created a truly idiotic crime; Meat Smuggling: 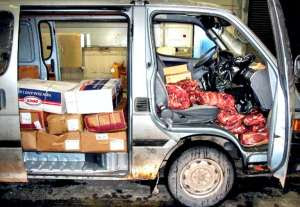 Police are seizing more smuggled meat than ever before, and border patrols suspect organized smuggling gangs that are supplying a market keen on dodging Norway's high meat prices.
Customs authorities have seized 34 tons of meat smuggled into Norway so far this year. That's three times the amount seized in the same period last year - Aftenposten

So how expensive is meat in Norway?

A study released Tuesday confirmed that meat prices in Norway are high, 82 percent above the European average.

Of course the excuse for high taxes is maintaining of the Social-Welfare State. But you have to wonder, if you are getting a good deal having the State provide for you when everything costs twice as much.

So what to do about this problem?

P.S:
One issue I keep bringing up with my friends who say the solution for 'the drug problem' is to legalize pot, is that it is idiotic to believe that legalized pot in Finland would be 'cheap'. Legalization would only increase whatever smuggling there already is. (Just don't do drugs....)

Anyway, why do prices have to be so high in Norway? They have this huge North Sea oil windfall that can take care of everyone.

Also, just image how much all this Europe-wide smuggling is contributing to global warming.
Posted by Fred Fry at Sunday, July 29, 2007