The Democrats in Congress seem to think that terrorists should be able to sue you for pointing them out.

At least this is the message they are sending out by stripping protection for people reporting suspected terrorist activity in good faith.

Congressional Democrats today failed to include a provision in homeland security legislation that would protect the public from being sued for reporting suspicious behavior that may lead to a terrorist attack, according to House Republican leaders.

"This is a slap in the face of good citizens who do their patriotic duty and come forward, and it caves in to radical Islamists," said Rep. Peter T. King, New York Republican and ranking member of the House Homeland Security Committee.

Republicans wanted the provision included in final legislation, crafted yesterday during a House and Senate conference committee, that will implement final recommendations from the September 11 commission.

Mr. King and Rep. Steve Pearce, New Mexico Republican, sponsored the provision after a group of Muslim imams filed a federal civil rights lawsuit against US Airways and unknown "John Doe" passengers. The imams were removed from US Airways Flight 300 on Nov. 20 after fellow passengers on the Minneapolis-to-Phoenix flight complained about the imams' suspicious behavior. - Washington Times

There is valid concern that the imam lawsuit against the good samaritans who pointed out the imams suspicious behavior is going to make people reluctant to say something in the future. At the very least, it is going to make it harder to get these people to step forward and testify.

The imam lawsuit is really a good example of a Mohamed Atta trial, had he been arrested while attempting to board his flight on the morning of September 11th. Just imagine the uproar from the Democrats had the Government stopped the 'suspected' 9/11 attacks by arresting enough of the terrorists to cancel their plans. Really, what kind of evidence would we have? Box cutters? That's nothing compared to what Americans were packing in their carry on bags before September 11th. (I used to fly with a Myerchin sailor knive. They used to let people on flights with axes, chain saws, etc. Most anything, other than a gun.) Even today, a shocking high number of 'truthers' think that the US Government was behind 9/11. Mohamad Atta would have had no end of supporters had he ended up in a jail cell instead. As a bonus for saving him from becoming a martyr, he would have been able to launch all sorts of lawsuits from his jail cell.

This open liability is not going to affect me. I would rather say something and be alive to be sued, than keep my mouth shut, in effect becoming partly responsible for the end result. Being politically correct is just something that can turn you into a victim. A dead one.

As a result of this, you will probably see more of what happened to Monarch Airlines flight ZB 613 in August 2006. Many passengers simply refused to fly with two suspicious passengers.

Mrs Schofield, 38, said: "The plane was not yet full and it became apparent that people were refusing to board. In the gate waiting area, people had been talking about these two, who looked really suspicious with their heavy clothing, scruffy, rough, appearance and long hair.

"Some of the older children, who had seen the terror alert on television, were starting to mutter things like, 'Those two look like they're bombers.'

"Then a family stood up and walked off the aircraft. They were joined by others, about eight in all. We learned later that six or seven people had refused to get on the plane.

"There was no fuss or panic. People just calmly and quietly got off the plane. There were no racist taunts or any remarks directed at the men.

"It was an eerie scene, very quiet. The children were starting to ask what was going on. We tried to play it down." - Daily Mail

Thankfully, the stupidity going on in Congress is not going to stop others, such as this guy below. Not yet at least. (You see, dogs are considered dirty in Islam. So surely at some point they will sue to not be searched by them.) 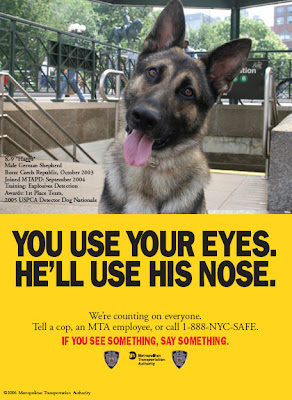 So sue me. Because that is going to drag your activities out into the public.

I wonder. How is it that millions of other Muslims all manage to fly around the world without causing these problems? There were other Muslims on the plane the six imams were removed from. They were just as happy to see those six removed as everybody else. See my post "US Airways Imams Should Be Prosecuted" for more thoughs concerning the flying imams.

Good luck out there. Thanks to Democrats, your going to need it just a little bit more.