I for one think that North Korea should test one of their nuclear weapons. After all, thanks partly to President Clinton, we paid for the program. So lets enjoy the fireworks. The estimates are that they only have about five or six weapons. I hope they test them all. At the very least, it would be one less weapon that we all have to worry about.
There is just one problem in letting them test a nuke. A test is what a potential buyer needs to be sure that he is buying a product that works. This theory does not seem to have made it into the news leaving the sudden international pressure and concern about a threatened test appear odd. Everyone suspects that they have a weapon and there is no real outrage over that, so lets see if the intel is true.

There is one real potential buyer for a product like this, Iran. This makes sense in that North Korea has sold every operational weapon system that they have developed and they need money. Iran has a nuclear program but they might be thinking that they do not have enough time to develop their own bomb. Buying one, is simply taking a short cut. It might even be a simple 'nukes-for-oil' trade. 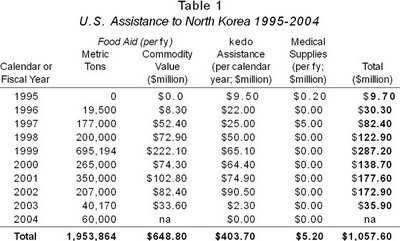 It may be perplexing and counterintuitive to see the United States — the dprk’s longtime principal opponent and antagonist in the international arena — described as a major backer of the North Korean state. Yet this is now in fact the case. Figures compiled by Mark Manyin of the Congressional Research Service provide the details (see Table 1). In the 1996-2002 period, Washington awarded Pyongyang just over $1 billion in food aid, concessional fuel oil, and medical supplies. (Interestingly enough, nearly $350 million of these resources was transferred in the years 2001 and 2002 — under the purportedly hostile aegis of the George W. Bush administration.) - Policy Review

We can thank President Clinton for the fact that we are dealing with North Korea problems at all. North Korea lost it's major aid provider when the Soviet Union collapsed. As a result, most of North Korea, including all of the factories spiraled into collapse. Then there was a severe drought that killed around a million North Koreans. With the country falling apart around them, North Korea managed negotiations with the US that resulted in aid in exchange for the North quitting it's nuclear program. In reality, they took the aid to keep the regime afloat, and continued on developing the weapon in secret.

South Korea also paid for the North's nukes as part of their 'Sunshine Policy.' Funny, that the 'sunshine' that the North is going to send back might be in the form of nuclear radiation.
Now if North Korea does not press the button on a nuke, the diplomats will declare a victory. I think that is a victory that we can do without. Let them have their moment and then the US should use the test as the excuse to bring an end to Communist North Korea. The test will also be a good reminder to many in the South who don't appreciate the US military presence in their country and will encourage them and others, including the Japanese, to economically strangle the North into collapse.

Now if only this test will convince the UN, the World Food Program, and the EU to NOT come to the rescue of the people of the North as it is this aid that keeps to Government viable.

(Yes, it is a shame that the people of the North will suffer in the short run, but even with the aid, the entire population has been suffering for over a decade. Providing aid only prolongs the conflict as the West loses focus at the real problem at hand. At any rate, it is the responsibility of the North Korean Government to provide for their citizens.)
The Persistence of North Korea - Policy Review

Update: 9 October 2006
They managed to pull it off and did it at a time that word was circling that there would be a delay to give the US time to remove some banking sanctions that have been hurting the north more than expected. Of course they could be claiming a natural event as a test, but it's not so easy to predict an earthquake and the north gave advance warning of the test just prior to the explosion.

Let the games begin. I am interested in seeing what North Korea's next move is going to be. I am not sure what to expect to come out of the UN, other than calls for more negotiations. China might stop aid flowing to North Korea, but for how long? 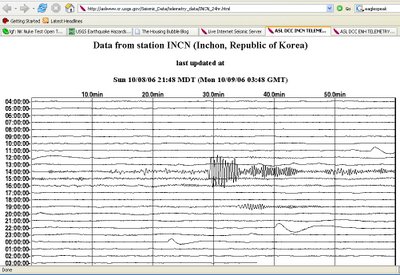 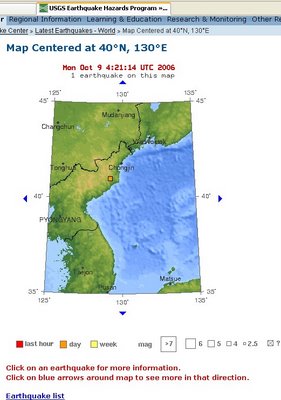 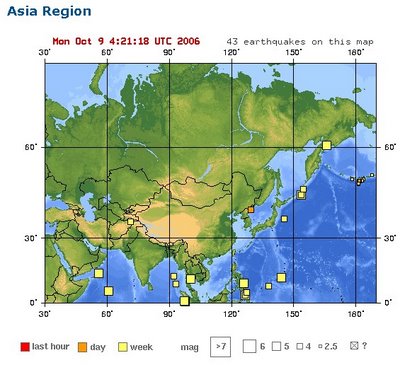 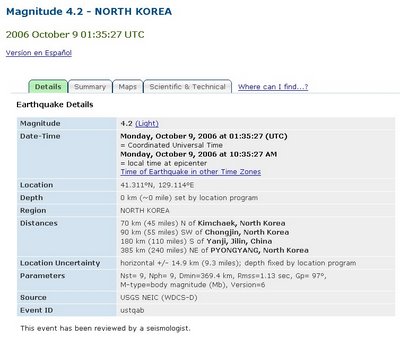 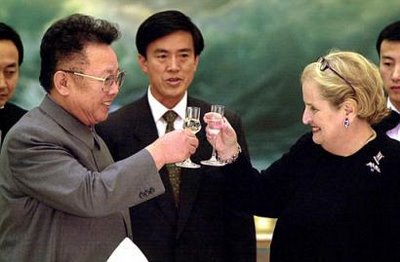