I found this on Aloha Dump. It was taken in Afghanistan. Click on the photo for the story. 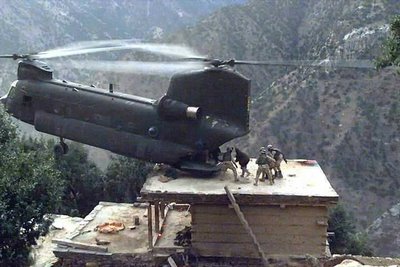 Great flying, teamwork with a little trust added in.

Here is the story according to Snopes.com:

Origins: In November 2003, a U.S.-led coalition launched Operation Mountain Resolve in the Nuristan and Kunar provinces of Afghanistan in order to disrupt anti-coalition militia (ACM) operations and prevent militia members from seeking sanctuary in the rugged Afghan provinces. The above-displayed photograph of the precarious-looking rooftop landing by a CH-47 Chinook helicopter (which began circulating via e-mail in December 2003 and started making the rounds of the Internet again in August 2006) was taken during that operation by U.S. Army Sgt. Greg Heath of the 4th Public Affairs Detachment.

Although the text that accompanied copies of this image sent via e-mail in 2006 suggested the activity shown therein was part of an effort to evacuate wounded coalition soldiers, the photo actually captures the Chinook helicopter touching down to receive Afghan Persons Under Control (APUC) captured by members of the U.S. 10th Mountain Division. - Snopes.com

I guess this is part of the leave no stone unturned policy.
Posted by Fred Fry at Tuesday, October 17, 2006