Looking Forward to the Upcoming Election

For starters, I am looking forward to the election so that we can get all this electioneering behind us.
Doom and Gloom is the basic impression I get from the polls covering the mid-term elections. If one was not paying attention, they might start to believe these polls. That's a shame considering that the polls were highly inaccurate in 2002 and in 2004 as well. After the fact, the polling organizations investigated why their results differed so greatly from the actual results. They then published nice detailed reports explaining how their polling methods were biased in favor of Democrats. Too bad they have done nothing to compensate for the errors that resulted in overstating Democrat support.

Since they have done nothing to remove the Democrat bias from the polls, I suspect that the bias is now even worse which makes me wonder, just how bad a hangover will Democrats be suffering with on the day after election?

Some supporters of John Kerry shocked by President Bush's victory in last week's election continue to seek out psychological help, prompting at least one mental-health center to offer free counseling through the end of this year.

The Florida-based American Health Association has released symptoms of what it calls "post-election selection trauma," or PEST, which include: feelings of withdrawal, feelings of isolation, emotional anger and bitterness, loss of appetite, sleeplessness, nightmares, pervasive moodiness including endless sulking, and being excessively worried about the direction of the country.

"Post-election selection trauma affects many people and they have a right to be taken seriously and to seek counseling," psychotherapist Rob Gordon of the AHA told the Boca Raton News. "This is a real need and we're a charity. This is not a matter of Republicans and Democrats."

Some 30 people have reportedly contacted Gordon's group for counseling since Kerry conceded the race to Bush Nov. 3, and more than a dozen others in Palm Beach County have undergone intense hypnotherapy by trauma specialist Douglas Schooler.

"The problem is out there and it's not going to go away anytime soon," Schooler told the paper. "Conservatives are calling me to say these people are weak-kneed kooks, but they're not acknowledging that this is a normal psychological response to a severe and disillusioning situation. Any suggestion that this is not a serious problem arises from a political agenda. The Republicans don't want this talked about." - © 2004 WorldNetDaily.com

So remember to vote. (Once please.)

Bonus:
Here is another ad from Jim Zucker warning what might be coming if the Democrats regain control of Congress: (Spotted at Lawhawk/A Blog For all)

Win or lose for the Republicans, the day after the election can't come soon enough! Then we can all focus on the madness of the 2008 Presidential elections.

Note to Republican Leadership in Congress: You guys suck. Your getting my vote because the other guys suck more. So get your asses in gear and start fixing problems, instead of f*cking with all of us. 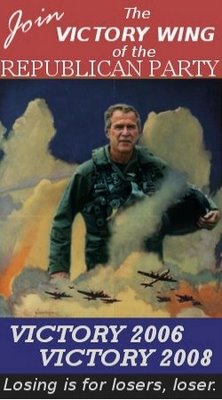